BUENOS AIRES, Dec 12 2012 (IPS) - The courtroom broke out in angry shouts and cries when judges in Argentina unexpectedly acquitted 13 defendants accused of kidnapping a young woman and forcing her into prostitution in 2002.

The high-profile trial for the kidnapping of María de los Ángeles “Marita” Verón, who is still missing, ended late Tuesday after a four-hour delay by the three-judge panel in the courtroom in the northwest province of Tucumán.

The judges said there was no evidence that the seven men and six women kidnapped Verón.

Susana Trimarco, Verón’s mother, said she would try to get the three judges impeached, and accused them of receiving bribes. “We aren’t going to stop until these crooks are dismissed from their posts,” she said after the verdict was read out. 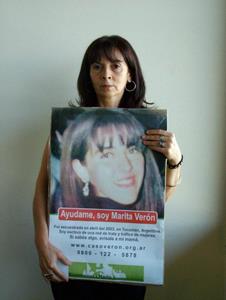 Trimarco later told a local TV station about a conversation she had after the trial with President Cristina Fernández, who gave her a human rights award on Sunday Nov. 9. “Cristina was shouting; she couldn’t believe it,” the activist said.

The trial began in February in Tucumán, where Verón was kidnapped at the age of 23.

More than 100 witnesses took the stand, including a dozen women rescued from sex trafficking rings thanks to Trimarco’s activism, which emerged from her unflagging efforts to find her daughter.

The women said they had seen and talked to a haggard, drugged Verón in brothels in the nearby province of La Rioja.

Trimarco had hoped that a guilty verdict in the trial would give a boost to the investigation into the whereabouts of her daughter.

The prosecutors were asking for 12 to 26 years in prison for the defendants.

While the accused, with looks of surprise and relief on their faces, hugged each other and cried tears of joys, people watching the trial in the courtroom shouted expletives and sobbed.

Verón’s mother left the courtroom before a summary of the arguments was read out.

“This ruling is a clear indication of the complicity of the judiciary in (sex) trafficking,” said Fabiana Túñez, director of La Casa del Encuentro, an NGO that campaigns against gender violence and has gathered testimony and evidence in 700 cases of girls and young women who have fallen victim to sex trafficking rings in Argentina.

“This sentence validates impunity,” she told IPS. “As nearly always occurs in cases of gender violence, the courts do not believe the victims – women who have been rescued. So we are going to hold a march to demand that they receive the necessary protection.”

Túñez was referring to the former victims of forced prostitution who took the stand in the trial. Trimarco said they now feel despondent and afraid.

Verón left her home on Apr. 3, 2002 for a doctor’s appointment. She never came back.

Trimarco, who received little help from the police, found out that her daughter had been kidnapped, beaten, raped and drugged, and forced into prostitution in La Rioja. Verón was also apparently forced to change her appearance – one witness said her hair was dyed blond – and reportedly had a baby boy with one of the ringleaders.

Three days after Verón went missing, an anonymous phone caller said she had been seen being forced by two people into a vehicle of the “Cinco Estrellas” car rental service. One of the defendants accused and acquitted of her kidnapping was the owner of the car service.

Trimarco has raised Verón’s daughter Micaela, who was three years old when her mother disappeared.

Marita Verón’s father, Daniel Verón, who searched for her tirelessly, eventually succumbed to depression and died in 2010, “from the pain” according to his widow.

Trimarco started out visiting brothels, posing as a recruiter of prostitutes. Her one-woman campaign grew into a full-fledged movement, and eventually she created a foundation – Fundación María de los Ángeles – that has rescued over 130 women from sex slavery. She was also granted the “Women of Courage” award in 2007 by the U.S. State Department, which provided seed money for the foundation.

The story of the search for her daughter was made into a popular TV series, and was the subject of a documentary film.

She finally managed to bring the 13 defendants to court. But they all declared themselves innocent, and none of them revealed Verón’s whereabouts.

The defendants were not accused of human trafficking because the law cracking down on that crime was not passed until 2008, six years after Verón was kidnapped. Trimarco’s activism played a major role in getting the law approved.

Trimarco brought not only the issue of sex trafficking to light in Argentina, but also the complicity of the police, government officials, and members of the judiciary.

The search for her daughter took her as far as Spain, after a woman rescued from a brothel told her she heard one of the traffickers say she had been sent to that country.

In Madrid, Interpol, the international police, carried out two raids, which led to the rescue of dozens of young Latin American women, Trimarco testified in court. But her daughter was not among them.

As a result of Trimarco’s activism, a number of government policies and measures have been adopted to eradicate sex trafficking.

However, the 2008 law did not have the support of women’s organisations, because it differentiates between victims under and over the age of 18. Women who are not minors are required to prove that they had not willingly practiced prostitution.

“This is barbaric – in our view the women are all victims, whether they are minors or adults,” said Túñez.

In response to such criticism, a new bill was drafted, with the universal support of women’s groups. But it never made it to the floor for debate, and this month it was shelved.

Nevertheless, Túñez said that in the realm of public policy, important progress has been made in rescuing victims. Specific departments against trafficking have been created in the provinces, and awareness has been raised about the gravity of the crime, she said.

But girls, adolescents and young women continue to fall victim to trafficking rings by means of kidnapping, force, deception or coercion, especially in the country’s poorest provinces, in the north, where they are forced to work in illegal brothels masked as bars, known as “whiskerias”.

In September, the case of two girls, ages 14 and 16, made the headlines when they disappeared on their way home from school in the northern province of Jujuy. They were carrying no money or identity documents, and their families, who are still looking for them, suspect that they were kidnapped by a trafficking ring.

“If a ruling like this is handed down in such a high-profile case as that of Marita Verón, what can we possibly expect in the rest of the pending cases?” an anguished Túñez remarked.