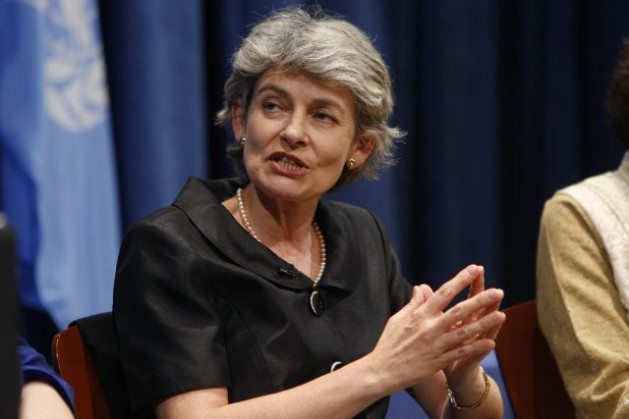 UNITED NATIONS, Mar 13 2013 (IPS) - What has education, science and culture to do with one of the world’s most scarce and finite resources?

Plenty, says the United Nations, which has designated the U.N. Educational, Scientific and Cultural Organisation (UNESCO) as the lead agency to promote the 2013International Year of Water Cooperation (IYWC).

Asked if water is more an area for potential conflicts or an area for mutual cooperation, UNESCO Director General Irina Bokova told IPS, “Water acts as a unifier.”

She said the historical record shows that water disputes do get resolved, even among bitter enemies, and even as conflicts drag out over other issues.

“Some of the most vociferous enemies around the world have negotiated water agreements or are in the process of doing so,” said Bokova, a former foreign minister of Bulgaria, who studied at the University of Maryland and at Harvard University’s John F. Kennedy School of Government.

In an interview with IPS, she said “it is often said that water can be a source of conflict.

“But at UNESCO, we are guided by the opposite idea – we want to see water as a tremendous resource for cooperation, for exchange and joint work between States and societies,” said Bokova, the first woman to head UNESCO, and who is expected to run for a second four-year term, come October.

According to the United Nations, the IYWC will highlight “the history of successful water cooperation initiatives, as well as identify burning issues on water education, water diplomacy, trans-boundary water management, financing cooperation, national/international legal frameworks, and the linkages with the Millennium Development Goals (MDGs).”

Bokova said, “We need a new vision that marries social equity, environmental protection and sustainable economic development as part of a single agenda for a more sustainable world.”

She said UNESCO strongly believes that water must lie at the heart of this vision, and water diplomacy is an essential tool of ‘soft power’ for a more peaceful world.

Some of the most vociferous enemies around the world have negotiated water agreements or are in the process of doing so.

Q: What are the specific areas of cooperation between, and among, countries now?

A: The Mekong Committee has functioned since 1957, exchanging data throughout the Vietnam War. Secret “picnic table” talks have been held between Israel and Jordan since the unsuccessful Johnston negotiations of 1953 to 1955, even as these riparians until only recently were in a legal state of war.

The Indus River Commission survived through two wars between India and Pakistan. And all ten Nile riparians are currently involved in negotiations over cooperative development of the basin.

There are numerous examples where trans-boundary waters have proved to be a source of cooperation rather than conflict. Nearly 450 agreements on international waters were signed between 1820 and 2007. And over 90 international water agreements were drawn up to help manage shared water basins on the African continent.

Q: Are the U.N.’s efforts at “water cooperation” feasible against the backdrop of water-sharing conflicts between India-Pakistan? Israel-Jordan? Palestine-Israel?

A: The role of the United Nations is to offer a platform for dialogue and communication through the tools that are available to the system. Each agency facilitates cooperation from a specific angle of intervention.

UNESCO, for example, uses education and science as a means to intervene in a situation where cooperation needs to be established or enhanced. Two unique programmes provide the organisation’s member states with the scientific backbone needed for any water management issue at any level – from the local to the national, regional and international levels.

Firstly, the International Hydrological Programme (IHP) is the only intergovernmental scientific cooperative programme that aims at helping member states manage their water resources and address the needs of their peoples through science and education.

And, secondly, he World Water Assessment Programme (WWAP) which provides invaluable data and regular assessments of the planet’s water resources, without which decision makers cannot move forward with their decisions making processes.

A: Example 1: UNESCO’s Potential Conflict to Cooperation Potential (PCCP) programme, which is an associated programme of both IHP and WWAP, facilitates multi-level and interdisciplinary dialogue to foster peace, cooperation and development by building capacity to manage trans-boundary water resources.

For example, research on Lake Titicaca involved stakeholders from both Bolivia and Peru. A joint document was prepared outlining the status of conflict and cooperation in this trans-boundary water body.

In 1992, Bolivia and Peru created the Bi-national Autonomous Authority of Lake Titicaca recognising the importance of the joint management of the lake.

The PCCP programme worked to build on this cooperative will and to facilitate a joint vision common to all stakeholders through a joint case study providing a forum for cooperative action, and a joint management strategy while at the same time increasing knowledge of the shared water body.

Example 2: Arab countries are cooperating on the management of shared water resources through various intergovernmental fora.

These include the Arab Ministerial Water Council, which adopted the Arab Strategy for Water Security in the Arab Region to meet the challenges and the future needs of sustainable development (2010-2030).

The strategy highlights the importance of regional cooperation among Arab states for the management of shared water resources, the protection of Arab water rights, and the improvement of access to water supply and sanitation services.

Regional cooperation at the basin level is also being pursued to improve the management of shared surface and groundwater resources by adopting a common vision and the establishment of an inventory of shared surface and groundwater resources in the Western Asia subregion, which is being prepared by the U.N. Economic and Social Commission for Western Asia (UN-ESCWA).