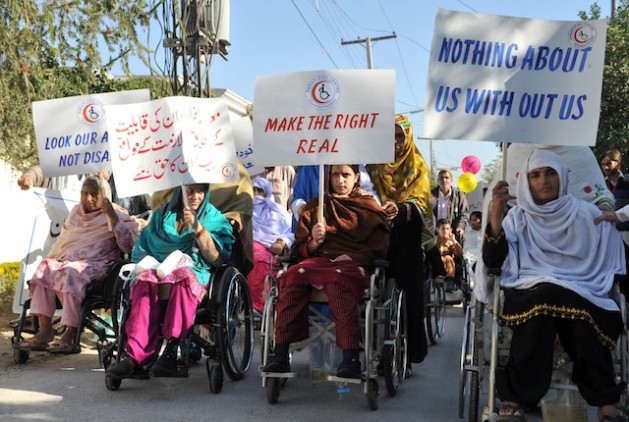 Women disabled in Taliban attacks on a campaign in Peshawar to seek rights for themselves and action against the Taliban. Credit: Ashfaq Yusufzai/IPS.

PESHAWAR, Mar 18 2013 (IPS) - People disabled through bomb and suicide attacks by the Taliban in the Federally Administered Tribal Areas and the nearby Khyber Pakhtunkhwa province are seeking support for themselves, and demanding strict action against the Taliban.

“There’s an urgent need of a campaign against Taliban militants to stem the tide of militancy and safeguard people,” Muhammad Imran, a resident of Bajuar Agency within the Federally Administered Tribal Areas (FATA) told IPS. Imran, 34, was a successful farmer before he lost both legs in a bomb attack by the Taliban in January 2009.

“Any delay in action against the Taliban would add to the club of the disabled population,” he said.

FATA, located on the border with Afghanistan, was quiet before the arrival of the Taliban whose government was dismissed by U.S.-led forces in Kabul towards the end of the 2001. The region has been a hotbed of terrorism since the Taliban began targeting Pakistan forces, police and marketplaces in 2005.

“The number of disabled persons, widows and orphans has increased alarmingly in KP and FATA since 2005 due to militancy,” KP social welfare minister Sitara Ayaz told IPS. “The government has registered about 100,000 disabled persons and 50,000 widows.”

The number of orphans had also risen, she said. The population is still vulnerable to militancy which can hit people further and lead to more deaths and more people with disabilities, she said. “Only in Swat where the Taliban held sway between 2007 and 2009, about 7,000 people became disabled.”

Javidullah Shah, who now needs support sticks to walk, says he was sitting in his tailoring shop in his native Swat when he was injured in a Taliban suicide attack in September 2008. “After three months, doctors amputated my right leg,” he said. “Now, my only request to the government is that they come down hard on the Taliban because they deserve no mercy.”

Shah says he himself knows of about 150 people disabled in bombs and suicide attacks.

“The majority of people who suffered Taliban atrocities are opposed to any sort of negotiations with the Taliban, and argue that such a dialogue with militants is tantamount to betraying the people who stood by the government in fighting terrorism,” he said.

“The majority of these disabilities are very serious, and these people cannot work,” Dr Akbar Ali, an orthopaedic surgeon in Peshawar told IPS. The injured, he said, included women and children who suffered injuries outdoors, or even inside their homes in conflict zones.

Zari Jana, 50, a housewife, received serious injuries when a rocket landed in her house in August 2009 in Mohmand Agency. “I am now using a wheelchair in my home to move from one place to another, and I cannot work at all,” she said.

The Taliban militants are responsible, she said. “Due to my disability, my children have suffered a lot because I cannot serve them. God will punish the Taliban, they have destroyed thousands of people like me.”

The Habib Physiotherapy Complex in Peshawar is a major centre for treatment. “This year we dedicated Women’s Day to giving free treatment to women who suffered injuries,” Dr Mahboobur Rehman, head of the centre told IPS.

Most of the injured continue to need physiotherapy, he said. But beyond that they also need more support to include them in economic, political and social activities, he said.

“The government is planning a programme for the handicapped population in the conflict areas to reduce their pain, restore or improve function of their affected organs, give them physical exercises and improve the quality of their lives,” said Dr Rehman, who is the focal person for a government programme to rehabilitate the disabled population in KP and FATA.

But, he said, the government has limitations in providing physical health services for the war affected population. “Therefore, we are asking philanthropists to come forward and protect the future of the people who became disabled for no fault of theirs.”

Muhammad Wali from the Khyber Agency was injured by a shell that exploded near him in January this year. He is now awaiting an artificial limb. Hundreds of others are waiting like him, he said, and they need donor agencies to come forward.

Sartaj Ahmed of the social welfare department says the United States Agency for International Development (USAID) is conducting a survey to register widows, orphans and permanently disabled persons with a view to rehabilitating them.

“The majority of the disabled people are becoming beggars. We receive 15 people on average every day seeking financial assistance,” he said.