Aiming to Conserve Energy, Antigua Turns to Its Residents 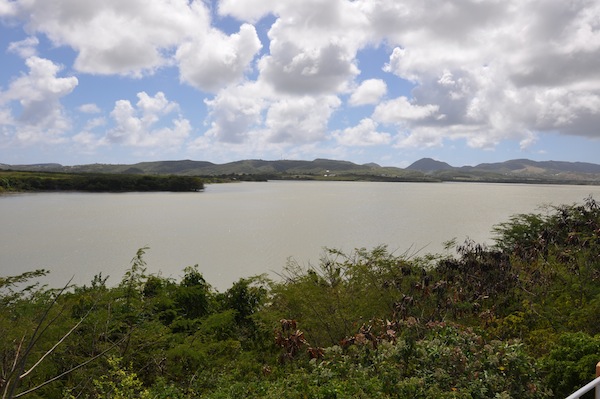 Water catchment in Antigua, where water is one of the most scarce resources. Credit: Desmond Brown/IPS

ST. JOHN'S, Antigua, Apr 30 2013 (IPS) - In drought-plagued Antigua, where water and energy top the list of most precious resources, one campaign is encouraging islanders to conserve both of these commodities.

The campaign, Green Antigua, of the state-owned Antigua Public Utilities Authority (APUA) has caught the attention of Brian Cooper, a British scientist who moved here in 1986.

“I’m very glad to see that the government is getting more serious,” Cooper told IPS, of APUA’s “very concrete programme”, through which people can produce their own power, thereby reducing reliance on the company.

“I don’t think it’s such that they can actually sell back to the company at this stage but at least it’s a start,” Cooper said. Residents of Antigua are beset by frequent power outages, and Cooper added that residents could also take very simple steps to conserve energy.

He suggested that people learn what household appliances consume the most energy, then try to cut back on using them.

“Refrigerators, hot water heaters and air conditioning units are big energy users,” he pointed out. “If you must have hot water for showering, install solar water heating so you can cut down on the amount of energy you are using.”

Cooper did admit that installing a solar water heating system is expensive and that “it does take a few years to write off the savings”.

As for conserving water, APUA, through the campaign, encourages residents to reduce water use and waste in their kitchens, bathrooms and outdoors.

Steps residents can take include finding and repairing leaks in faucets and toilets, not using running water to thaw frozen foods, installing low-volume toilet units that use less than half the water of older models, and taking shorter showers.

Another tip is never to pour water down the drain when it can be used elsewhere, such as to water a plant or garden or to clean one’s home.

APUA also wants residents to adopt habits that save energy, such as ironing only once a week, installing energy-efficient compact fluorescent bulbs or LED bulbs, and not overcharging cell phones.

The price of crude oil has consistently remained above 100 U.S. dollars per barrel since the middle of 2012, according to the latest available information from the International Energy Agency.

“The facts could not be more overwhelming,” Antigua and Barbuda’s prime minister, Baldwin Spencer, told IPS, adding that his office was spearheading efforts for Antigua and Barbuda to transition towards a more sustainable energy future.

“Every day, we learn of new information pointing to the adverse effects of fossil fuels on the earth’s climate and environment,” he said, emphasising that small countries are the ones most vulnerable to these effects.

Spencer said while Antigua and Barbuda’s contribution to global climate change is miniscule, “we nevertheless have certain principles to advance”.

Antigua and Barbuda, he noted, uses a large amount of energy because of its relatively high living standards. High consumption, however, “presents opportunities for us to reduce our demand for energy through improved management” without sacrificing growth and development, he said.

In fact, it is time to adapt policies, measures and patterns of energy use that will enhance competitiveness and efficiency in socioeconomic development, Spencer said.

In 2001, the government of Antigua and Barbuda endorsed a national energy policy, providing a broad framework for action on energy related matters.

The policy identified priorities including energy cost reduction, diversification of energy sources, electricity reliability improvement and stimulation of new economic opportunities, and Spencer said that the cabinet had approved “a comprehensive list of components required for installation of various renewable energy technologies, particularly for wind and solar applications”.

The government also successfully installed a 6-kilowatt solar photovoltaic power unit at the Shirley Heights Lookout near the historic Nelsons Dockyard National Park, with assistance from the United States government, the Organisation of American States, the European Union and the German government.

Valerie Hodge, general manager at the Shirley Heights Lookout, noted that the project constituted an important asset for the location, which was not connected to the existing APUA grid and was totally dependent on costly generator power to supply electricity.

Spencer said he believed that “the results so far have exceeded expectations”. In addition to significantly reducing the use of the generator, the project had reduced environmental pollution and greenhouse gas emissions and spurred productivity.

“The solar power unit also serves as a demonstration of the use of these technologies within an environmentally sensitive and historic site,” Spencer added.

The prime minister said the government has identified a number of other demonstration sites, including the VC Bird International Airport and the government office complex, for displaying renewable energy technologies.