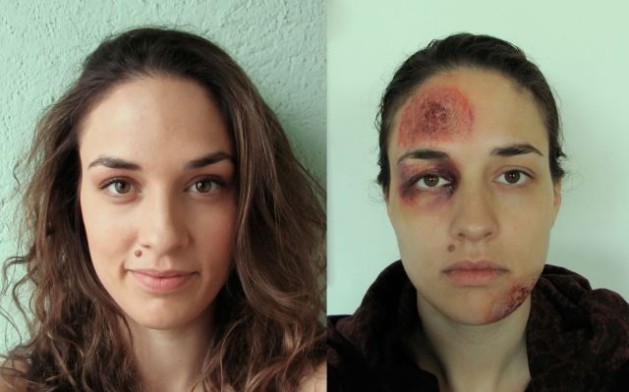 From the video “One photo a day in the worst year of my life”. Credit: Courtesy of B92 Fund Serbia

BELGRADE, Apr 26 2013 (IPS) - Up to a quarter of women in Europe have experienced domestic violence at some point in their lives, according to the Council of Europe. But despite the widespread nature of the phenomenon, more often than not we ignore it. A short video launched last month in Serbia managed to break this silence.

At first glance, the clip is just another photo-a-day video popularised on YouTube: photos of a smiling young woman follow one another, offering glimpses of different hairstyles and makeup choices.

But after a while the time-lapse video breaks the pattern. The woman’s eyes start looking sad, scared, and her face is covered in increasingly severe bruises and cuts. In the last image, she holds up a sign that issues a desperate call for help.

Before anyone even knew who the woman was or whether the video was genuine or fiction, it became a hit in Serbia and abroad, reaching two million views in just a few days.

It turned out that the film was in fact part of a campaign by the B92 Fund, a foundation associated with the leading private TV channel in Serbia, to raise awareness about domestic violence in this southeast European country.

In Serbia, over 60 women died as a result of domestic violence between the start of 2012 and today, according to the Autonomous Women’s Centre in Belgrade. And women’s groups claim that every second woman has suffered from verbal or physical abuse at some point in time.

“It is important to talk about this problem so that our society on the whole comprehends that it is not normal to beat women, so that women themselves are encouraged to report violence,” explains Veran Matic, the president of the B92 Fund. “Solidarity, getting people to react, and exerting pressure on authorities to take action on domestic violence are also our goals.”

Matic’s foundation has built five shelters for battered women in six years of work on domestic violence, and plans to open two more this year.

Together with the United Nations Development Programme (UNDP), the B92 Fund also works on lobbying authorities to better implement legislation providing protection from perpetrators of violence and assistance for victims.

B92 tries to harness the popularity and resources of the television station to meet social needs that are not properly fulfilled by state authorities.

For Danijela Pesic from the Autonomous Women’s Centre, which has worked on violence against women for the past two decades, improving the enforcement of legislation already in place is the most important aspect, as it would offer systematic solutions for victims.

She said that shelters, while important, are merely a short-term emergency response.

The other key to combating domestic violence is changing the culture, says Pesic. “The main cause of domestic violence is patriarchal values,” she says. “It is not poverty, lack of education or alcoholism – we are seeing the same rates of abuse in villages and cities, and across educational and wealth levels.

“Men have to stop believing they can be violent, and for this to happen we need to change our perception of gender roles, starting as early as kindergarten.”

Despite noticing some positive changes in Serbia over the past few years – importantly, women are feeling increasingly empowered – Pesic fears that the lack of systematic state support for actors working in the area of domestic violence might jeopardise progress.

Financing is patchy, often coming in the shape of project-based donations from the West, which inevitably run out without being replaced. As a consequence, for example, call centres for victims are forced to close down after only a few years, just as women are starting to rely on them.

Serbia is not yet a member of the European Union. And as a Balkan country, it has a reputation of being prone to machismo.

Yet the approach to domestic violence in this country is not untypical of the situation across many European countries: optimal legislation is adopted to meet EU standards, but state authorities fail to implement it properly; financing for non-governmental groups working on domestic violence is insufficient; and patriarchal values persist.

A 2012 report by the Women Against Violence Europe (WAVE) network shows that only a third of European countries meet Council of Europe recommendations when it comes to a national free of charge helpline for victims of domestic violence.

In terms of shelter availability, the situation is worse: only five of 46 countries studied offer the necessary number of places, with Central and Eastern European countries performing worse than their Western counterparts.

Many post-socialist countries have started taking measures for preventing domestic violence and assisting victims more intensively only over the past decade. In Estonia, for instance, all of the country’s ten shelters opened in the last five years, financed by a combination of governmental and non-profit sources.

But many women’s groups across the region express doubts over whether the centres and other forms of assistance for victims will be able to continue operating in the future. The already precarious sustainability of the financing is being put under severe strain by the economic crisis.

A 2010 report by Oxfam and the European Women’s Lobby, “Women’s Poverty and Social Exclusion in the European Union at a Time of Recession: An Invisible Crisis?”, quotes NGOs across Central and Eastern Europe declaring that an increasing number of women have been calling helplines and requesting access to shelters since the crisis began.

This information (not yet quantified at the European level) is in line with the general view that economic turmoil leads to an increase in frequency and intensity of domestic abuse.

The same groups are also reporting negative impacts of austerity measures implemented across Europe in response to the crisis: from the closing of shelters in Romania and complaints by Slovakian NGOs that they have been hurt by the withdrawal of foreign donors to Estonian groups arguing they cannot plan for the long term because of a lack of support from local authorities.

EU funds, primarily in the form of the Daphne Programme, which offers financing to many of the women’s rights initiatives across the region, are also under question. The EU’s seven-year budget is getting renewed at the moment and the austerity wave in Europe has already led to an announcement of a reduction of its overall size.

While the European Commission told IPS that it proposed that women’s rights and gender equality programmes receive a similar amount of funding as before (the intended amount is approximately 800 million euros for the next seven years), some fear the fund will be significantly trimmed during further negotiations.

“While the recession and austerity measures are having a detrimental effect on the prevalence of violence against women, they are also having a negative effect on women’s ability to escape the violence,” comments Pierrette Pape from the European Women’s Lobby.

“Women’s economic independence is undermined while public services face funding cuts and cannot therefore provide adequate quality services,” Pape adds. “NGO-led services to support women victims of violence are also threatened by the tendering and marketisation of services, which leaves behind and in isolation many women and girls affected by male violence.”