UNITED NATIONS, Apr 25 2013 (IPS) - Speaking of the widespread sanitation crisis, U.N. Deputy Secretary-General Jan Eliasson was quick to produce staggering numbers: of the world’s seven billion people, about six billion have mobile phones but only about 4.5 billion have access to toilets. 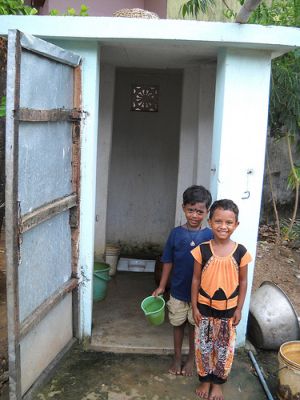 Indian children use a microfinanced facility in their backyard in a Bhubaneswar slum. Credit: Manipadma Jena/IPS

“And that leaves about 2.5 billion people, mostly in rural areas, without proper sanitation,” he points out.

Ironically, the world is saturated with an abundance of cell phones but is desperately searching for non-existing toilets.

A cartoon in a World Bank 2013 calendar puts the numbers in an even more realistic but light-hearted perspective.

The sketch shows a villager in some remote corner of the world, armed with a roll of toilet paper in one hand and a smart phone on the other, trying to track down the nearest toilet on the global positioning system (GPS).

The screen on the mobile phone reads: “Nearest toilet 2 kilometres away.”

Still, he is considered fortunate, because an estimated 1.1 billion people, (out of the 2.5 billion without adequate sanitation), are forced to defecate in the open because there are no toilets anywhere, says Eliasson.

And so, the World Bank is trying to help resolve the world’s sanitation problems with digital technology and mobile phone applications (Apps).

Last week it announced three prize-winners of the Sanitation Hackathon and App Challenge, described as a yearlong project to recognise innovative and locally relevant apps that address sanitation challenges.

Manobi, a mobile and internet services firm based in Dakar, Senegal, has developed an SMS (short message service) reporting tool that enables students, parents, and teachers to monitor and report on school sanitation facilities.

Sun-Clean, developed by a team of students at the University of Indonesia, is an app designed to teach children good sanitation and hygiene practices. The app includes two games: Disposal Trash and Hand Wash for Kids.

And Taarifa, created by a team of developers based in England, Germany, the United States and Tanzania, is an open source web application that enables public officials to tag and respond to citizen complaints about the delivery of sanitation services.

Asked about the digital approach to sanitation, Joseph Pearce, technical advisor at the London-based WaterAid, told IPS: “These apps are great examples of the wealth of ICT (information and communication technologies) innovations that are being produced to improve monitoring and education around water, sanitation, and hygiene.”

He said such simple ideas have the potential to transform lives. However, there are key technical and governance challenges in translating these projects into lasting solutions.

“Apps will play an increasingly important role in informing decision-making, but there is no technical solution to using this data,” he added.

Data collection still costs money, and political will is required to finance and act upon the findings. Turning data into decisions and concrete actions to improve access to water and sanitation, he cautioned, is perhaps the hardest part.

Clarissa Brocklehurst, former chief of water, sanitation and hygiene at the U.N. children’s agency UNICEF, told IPS that sanitation is such a huge and, so far, intractable problem that “we need to bring every bit of innovation to it that we can”.

This means solutions in terms of technology, institutions, behaviour change, financing and monitoring.

“The kinds of innovation the information technology (IT) community can bring are very welcome as a contribution. We clearly need more than apps and websites but they represent important new ways to tackle parts of the sanitation problem,” said Brocklehurst.

“But by combining it with business experts, strategists, sociologists and engineers, then real innovation can happen.”

This is what the Sanitation Hackathon sought to achieve, and by looking at the winning solutions, this has been a hugely successful initiative, he added.

“But the critical challenge is how this information is used and acted upon,” he said.

He said the sector also needs sufficient capacity and finance to convert this information into increased access for people, especially those living in low-income areas in cities and towns across the developing world.

“The challenge has only just begun,” he cautioned.

Tools are only effective if people know how to use them were interested to see how the deployment of these tools works out, he added.

“We’d like to see this initiative now extended into a global collaborative platform, where many people can use them and iterate them collaboratively,” he noted.

But that is starting to change, she said, as the impact of poor sanitation becomes clearer.

The health impacts are more generally researched and recognised, but more importantly, the economic impacts are now widely discussed.

Asked about the severity of the sanitation crisis in the run-up to the MDG deadline of 2015, Brocklehurst said, “The sanitation crisis is serious as we are a long way off from reaching the MDG target, and current estimates are that we will miss it by many millions of people.”

She said in many countries a huge acceleration in progress would be needed to reach the MDG, “and at current rates we would not reach it at a global level until 2026.”

More serious is the large proportion of people who lack improved sanitation who are actually using no sanitation at all, but resorting to the dangerous practice of open defecation – a practice that is dangerous not only for themselves, but for anyone living in their communities.

According to a press release, over 100 local partners supported the Sanitation Hackathon events.