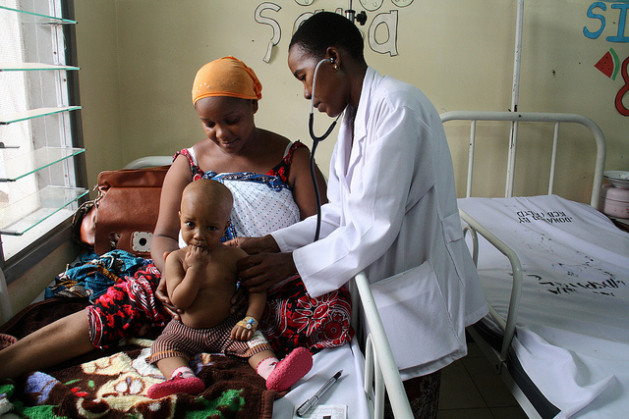 WASHINGTON, Apr 13 2013 (IPS) - The United Nations has unveiled a major framework aimed at, for the first time, coordinating worldwide efforts to work simultaneously to end childhood pneumonia- and diarrhoea-related deaths by 2025.

Together, these two diseases account for around 30 percent of all deaths of children under five years old, around two million every year. According to new data released by the World Health Organisation (WHO) and the U.N. Children’s Fund (UNICEF), most such deaths are taking place due to “piecemeal” services that are failing to reach the most at risk.

“Children who are poor, hungry and living in remote areas are most likely to be visited by these ‘forgotten killers’,” a new WHO/UNICEF report stated Friday, “and the burden placed by pneumonia and diarrhoea on families and health systems aggravates existing inequalities.”

The report comes as the agencies, backed by more than 100 global NGOs and civil society organisations, are announcing a new roadmap for national and international cooperation on the subject, called the Integrated Global Action Plan for the Prevention of Pneumonia and Diarrhoea (GAPPD). (A special issue of the medical journal The Lancet, also released Friday, covers the issue and the new action plan in depth.)

“With the release of the [GAPPD], we have a tool in place to combat these preventable illnesses once and for all,” Dr. Julio Frenk, dean of the Harvard School of Public Health, said Friday. “If we do this right, the ripple effects for equity, education and poverty reduction could be monumental.”

The new initiative goes to the heart of one of the Millennium Development Goals (MDGs), the internationally agreed development metrics. While MDG 4 requires that under-five child mortality be reduced by two-thirds by 2015 (compared to 1990 levels), progress has been deemed insufficient in several areas, including sub-Saharan Africa and South Asia.

While the action plan does not necessarily unveil any new techniques or funding mechanisms to battle pneumonia and diarrhoea, it does provide an approach that would integrate the use of already widespread interventions by multilateral, national and local actors.

“Although effective interventions have been well established, they are not always promoted together to achieve maximum benefit,” the report states.

“It is now clear that pneumonia and diarrhoea must be addressed in a coordinated manner. The determinants are often the same, hence preventive strategies and delivery platforms via health care facilities, families, communities and schools are similar.”

It is commonly known in the health field, for instance, that breastfeeding can cut down dramatically on rates of childhood diarrhoea. But new data suggests that just 39 percent of infants below six months of age are exclusively breastfed.

Likewise, slightly less than a third of children suspected to have pneumonia receive antibiotics, while only slightly more of those with diarrhoea receive cheap oral rehydration salts.

“The interventions are there already, but we now have to focus on reaching the poor and very vulnerable – those at highest risk who are often living in the hardest-to-reach areas,” George Armah, a University of Ghana researcher into causes of diarrhoea, told IPS by telephone.

“Importantly, these are things that can be done without much cost – for instance, improving vaccination coverage to these areas and improving sanitation.”

Yet while the new action plan aims at a minimum of 90 percent vaccine coverage by 2025, some are warning that high vaccine costs could make this integral part of the GAPPD approach untenable in the long term.

“Even at reduced prices, the [diarrhoea-causing] rotavirus and [pneumonia] vaccine together amount to 75 percent of the skyrocketing cost to fully vaccinate a child today. The price of the basic vaccines package has risen by an astronomical 2,700 percent over the last decade,” Dr. Jennifer Cohn, the medical director for the Access Campaign at Medecins Sans Frontieres (MSF), a humanitarian agency, said Friday.

“We are concerned that countries where we work will have the rug pulled out from under them when donor support to pay for vaccines tapers off and they are expected to foot the bill themselves. Because of the high price of new vaccines, countries may be forced to make difficult choices about which vaccines they can and can’t afford to use in order to protect children from killer diseases.”

The WHO and UNICEF emphasise that the GAPPD framework puts particular focus on frontline health-care providers, particularly those operating in the smallest or remotest communities. The University of Ghana’s Armah likewise notes that much of the work necessary under the action plan will depend on those who staff community-level health posts.

“Here in Ghana, the medical programmes are now not only top-to-bottom but also bottom-to-top, and it will be important to recognise that those within the community are best placed to identify people in need of vaccinations,” he says.

“Further, while interventions are being done we absolutely have to work with people to change their habits – and recognise that we in developing countries have an important role in this. After all, if we increase vaccinations but don’t change people’s [habits], then we aren’t going to be able to bring down these problems. So we have to look at all of these things together.”

Yet the framework also offers a secondary set of broader goals that adhere closely to the holistic suggests Armah makes. If these were reached, their effects would go far beyond the immediate aims of ending childhood pneumonia- and diarrhoea-related deaths.

By 2030, for instance, the framework undertakes to offer universal access to basic drinking water in all homes and health care facilities. And by 2040, all homes are to have “adequate” sanitation.

In addition, the GAPPD pledges to provide universal access to clean energy technologies (smoky indoor cooking technologies being a major driver of pneumonia), as well as the “virtual elimination” of paediatric HIV, long considered one of the world’s neglected diseases.

“Implementation … will require focused interventions that make safe drinking water, sanitation, hygiene, nutrition, primary health care and health information and education available to everyone,” Harvard’s Frenk says. “The GAPPD is a key piece of the puzzle, and now is the time to make it matter.”