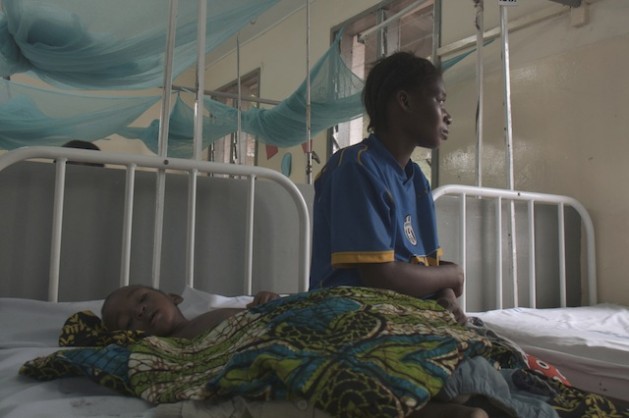 DAR ES SALAAM, Dec 13 2012 (IPS) - Half asleep, Anuary lies exhausted on his bed in Amana Hospital in Dar es Salaam, Tanzania’s capital. His mother, Mariam Saidi, sits on the edge of his mattress, staring blankly out of the window. Every now and then, she turns to wipe her 18-month-old son’s forehead.

When she brought Anuary to the hospital the day before, he had a high fever, was suffering from viral diarrhoea, was severely dehydrated and had lost consciousness by the time he was admitted. The doctors saved his life, but he faces a slow discovery.

“Viral diarrhoea and respiratory infections are very common in children here,” hospital director Dr. Meshack Schimwela tells IPS. “Both illnesses are leading causes of death of children under the age of five in Tanzania.”

Anuary’s hospitalisation puts Saidi, a single mother who works as a hairdresser in the slum of Buguruni on the outskirts of Dar es Salaam, under severe economic strain. Each day that she spends next to her son’s bed is a day that she does not earn any money.

Already, she struggles to make ends meet with her meagre salary of four dollars a day, which, she says, affords her only one meal a day. “God knows how we will cope,” the 21-year-old tells IPS. “It’s very difficult.”

Anuary’s illness could have been easily prevented had he been immunised against the Rotavirus, which causes severe diarrhoea, commonly known as “stomach flu”. But the vaccine is currently not available through the public health system in this East African nation.

The situation is similar in many other countries on the continent. About 20 percent of Africa’s children – or every fifth child – are not immunised, according to the international children’s charity Save the Children.

“It’s always the poorest children who don’t get access to vaccination services,” says Kirsten Mathieson, health policy and research officer at Save the Children. “Much more needs to be done to reach the ‘fifth child’.”

In Tanzania, at least, this may soon change. Through co-financing from the GAVI Alliance – a global public-private partnership for vaccines and immunisation that negotiates lower vaccine prices for the world’s poorest countries – the government will be able to integrate Rotavirus as well as pneumococcal vaccines into its routine public immunisation programme from January 2013.

“Children in developing countries have an 18 percent higher chance of dying before their fifth birthday (than those living in developed countries). Vaccination could make a big difference,” GAVI deputy chief executive officer Helen Evans tells IPS.

Dr. Mtagi Kibatala, acting chief paediatrician at Amana Hospital, agrees: “A lot of the children in our paediatric wards would not be here had they access to Rotavirus and pneumococcal vaccines.”

Vaccinating all of the children in this country of over 885,000 square kilometres, almost four times the size of the United Kingdom, will take time. Reaching nomadic families and those living in remote rural areas or on small islands will be especially tough, Kibatala tells IPS. She expects it will take “at least a year” to see an improvement in child health and a decrease in mortality rates.

Another hurdle is Tanzania’s severe health worker shortage. About 40 percent of positions in the country’s public health facilities are vacant, according to the Ministry of Health. Without sufficient personnel, it will be difficult to provide health care to every child, Schimwela says.

The impact vaccines can have on children’s health “is very clear”, explains Schimwela. Tanzania has seen a steady decline in child mortality since it started offering vaccines through its public health system that protect against polio, tetanus, tuberculosis and diphtheria.

Although the introduction of the Rotavirus vaccine will come too late for Anuary – children have to be younger than 15 weeks for it to be effective – thousands of Tanzania’s children will not only be able to lead healthier, but also happier, lives.

One of those children will be six-week-old Rosemary Julius.

Her mother, Janet Julius, patiently sits on a blue plastic chair in front of the Buguruni health clinic, fanning herself against the stifling December heat, Rosemary snug on her lap.

Rosemary is one of seven infants who were chosen by the clinic staff to receive dual Rotavirus and pneumococcal immunisation. Although the vaccines will officially only be available from next month, the health department decided to immunise a small group of babies in celebration of the launch of the new vaccines.

Julius, a 22-year-old housewife who was told about this opportunity during a post-natal check-up, says she is extremely happy that Rosemary will now be protected against pneumonia and viral diarrhoea. She tells IPS: “I have seen babies get very sick and die. The vaccine will help my child to grow up well.”