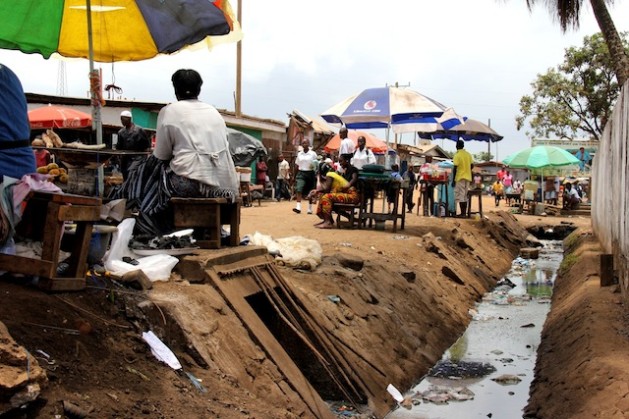 NIAMEY , Apr 10 2013 (IPS) - About 20 communities in Tillabéri, west Niger, have been declared open defecation-free zones as across the country, very few people have access to proper sanitation.

The communities were part of a Community Led Total Sanitation (CLTS) project, launched in September 2010 in 32 villages in the region by the local office of the NGO Plan International.

Souley Hachimou, a sanitation technician in Niamey, the Niger capital, told IPS: “Open air defecation is a widespread hazard in Niger, especially in rural areas where people do not see the need for latrines, as they have the bush nearby to relieve themselves.”

But, according to the United Nations Children’s Fund (UNICEF), more than 90 percent of the population in rural areas still practice open defecation.

Part of the reason could be Niger’s rapid population growth since 1990.

According to a study on sanitation in the five African countries of Niger, Sierra Leone, Ghana, Uganda and Rwanda, published on Feb. 20 by the international NGO WaterAid, “between 1990 and 2013, Niger’s population increased by 7.7 million people, but only one million people had access to sanitation during the same period.”

Salmou Yacouba, a 62-year-old resident of Saga-Gorou, a village close to Niamey, told IPS that this was because many in the rural areas were not used to toilets. “The construction of latrines, even traditional ones, requires money to buy cement and steel reinforcements for the slab, never mind the labour. We are not used to toilets – they are for towns where there are no open spaces for people to relieve themselves,” she said.

Boulkassoum Hamadou, an inhabitant of Tillabéri, told IPS that it was difficult to maintain the deep pits needed for latrines in rural areas.

“They have to be emptied once they are full, otherwise the stench around the village is intolerable. Everyone needs to help maintain latrines, which is difficult enough in a household, never mind a village.

“This is why people continue to defecate outside.”

But Marietou Boubacar, a 31-year-old small-scale farmer in Saga-Gorou, conceded that open defecation was unhealthy. “When you learn that contagious diseases, especially cholera, are caused by a lack of sanitation and hygiene, you start to adopt good practices, and you stop defecating in the open because health is precious,” she told IPS.

The WaterAid report pointed out that “out of 15.5 million Nigeriens, 14.1 million do not currently have access to proper toilets; only six percent use latrines, while 79 percent resort to open air defecation.” The report, titled, “Keeping promises: Why African Leaders Need Now to Deliver on Past Water and Sanitation Commitments” attributes this to the government’s failure to honour previous financial commitments in the sanitation sector.

In all five countries covered by the study, the current levels of access to sanitation compared to the targets set out in the U.N. Millennium Development Goals, eight development goals adopted by U.N. member states in 2000, leave much to be desired. The current overall level of access to sanitation in Niger is nine percent, though in rural areas it is only four percent.

Niger has also failed to meet the commitments of the African Union’s “eThekwini Declaration” signed in South Africa in 2008, where governments agreed to commit at least 0.5 percent of their GDP to sanitation.

According to the WaterAid report, 0.89 percent of GDP (39.4 million dollars) has been spent on water and sanitation combined between 2007 and 2010.

“There is no clear separation of budget items dedicated to water and sanitation to help make more accurate assessments of the efforts made by each government department, but investments are probably less in water and hygiene,” Hachimou said.

Soumaïla Hima, a health worker in Niamey, said that “a lack of access to sanitation and hygiene is the cause of the most recurrent diseases in our country, such as parasitic and diarrhoeal illnesses.”

“The cholera epidemic which spread across the whole country last year, causing several thousand infections, including 300 deaths, is mainly the result of this,” he told IPS.

The WaterAid report cites a World Bank calculation that “the lack of access to sanitation costs Niger the equivalent of 2.4 percent of its GDP, about 143.6 dollars per year (to treat diseases), which is two and a half times the annual amount spent on access to water and sanitation.”

In addition to the cost incurred for medical visits, hospitalisation and the purchase of medicines, Nigeriens also waste a huge amount of time looking for a place to relieve themselves — about 2.2 billion hours per year, Hamani Oumarou, the head of WaterAid in Niamey, told IPS.

Development partners are supporting the Niger government achieve its target to increase the number of people with access to sanitation from six percent in 2009 to 25 percent per year by 2015, according to the Nigerien Minister of Water and Environment.

Togota Sogoba, the head of water and sanitation at UNICEF in Niamey, told IPS that the organisation was also undertaking “projects along the lines of CLTS (Community Led Total Sanitation) in 225 villages, among which 140 have completely stopped open air defecation.”