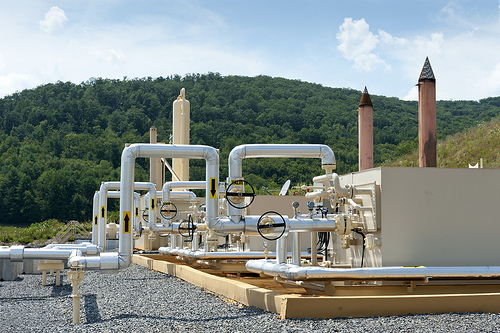 MEXICO CITY, Apr 18 2013 (IPS) - Mexico plans to expand shale gas exploration this year, but it could run into a shortage of water, which is essential to hydraulic fracturing or fracking, the method used to capture natural gas from shale rocks.

“In Mexico there isn’t enough water. Where are they going to get it to extract shale gas?” Professor Miriam Grunstein at the Centre for Research and Teaching in Economics (CIDE) remarked in an interview with IPS.

She is opposed to the involvement of PEMEX, Mexico’s state-run oil company, in fracking, and recommends that it instead focus on higher priority sectors.

In 2012, a lengthy drought especially affected a large part of central and northern Mexico, with a heavy impact on agriculture and livestock, and on living conditions in dozens of rural villages.

And the forecast for this year is not much different.

Since 2011, PEMEX has drilled at least six wells for shale gas in the northern states of Nuevo León and Coahuila. And it is preparing for further exploration in the southeastern state of Veracruz, at a cost of 245 million dollars over the space of 18 months, in conjunction with the Mexican Petroleum Institute (IMP), a state institution.

To obtain shale gas, high pressure is applied in order to pump vast quantities of chemical sludge into layers of shale rock located deep in the earth. This results in the fracturing of the shale and the release of natural gas trapped in the rocks.

Enormous quantities of water and a broad range of chemicals are required. And the process generates large amounts of waste fluids, which contain dissolved chemicals and other contaminants that need treatment before recycling or disposal.

“The environmental impact has to be factored in,” Professor David Enríquez at the private Autonomous Technological Institute of Mexico (ITAM) told IPS. “It is an extremely touchy question, especially when you take into account the lack of water and the environmental problems in this country. Technical studies of all kinds have to be carried out, and the environment should be included in them as the key variable.”

“If that doesn’t happen, shale gas projects should not move ahead,” said Enríquez, who specialises in energy issues.

In a 2011 report, “World Shale Gas Resources: An Initial Assessment of 14 Regions Outside the United States”, the U.S. Energy Information Administration (EIA) assessed 48 shale gas basins in 32 countries, including Mexico, and estimated that there were 6,622 trillion cubic feet of shale gas in the United States and the other 32 countries studied.

For Mexico, it calculated 681 TCF – the fourth largest reserves in the world

But PEMEX estimates the country’s shale gas potential at a more conservative 297 TCF.

“The best available practices and technology have to be incorporated to achieve a good profit margin, minimise the use of water, and comply with environmental regulations,” Francisco Barnés, a member of Mexico’s Energy Regulatory Commission (CRE), told IPS. “The environment is fundamental; it doesn’t matter whether or not the project is profitable.”

In deposits like Chicontepec in Veracruz, the biggest oilfield in Mexico, which was discovered in the mid-1970s, PEMEX has used recycled water.

But in its shale gas wells, the company has not clarified where the water comes from or what is being done with the waste.

The National Hydrocarbons Commission (CNH), in charge of technical permits for PEMEX projects, will analyse and approve regulations for fracking this year.

Mexico’s oil giant plans to drill 20 wells by 2016, with a total investment of over two billion dollars. It projects operating 6,500 commercial wells over the next 50 years.

“If there is an environmental impact, why isn’t development curbed?” Grunstein said. “When it comes to large-scale drilling, there is no confidence in the state. It implies a ridiculously high opportunity cost.”

In response to the criticism, some cite the experience of the Center for Sustainable Shale Development (CSSD), an alliance of environmental organisations, academics and oil companies established this year in the U.S. state of Pennsylvania, where extensive shale gas development has taken place.

The Center adopted 15 voluntary performance standards for the protection of air quality, water and the climate, a format that could be replicated in Mexico. The scheme includes an independent, third-party evaluation process to certify companies that achieve and maintain these standards

“There should be an environmental certificate by national and international bodies that evaluate the model used and carry out monitoring,” Enríquez said. “Technical, analytical criticism is needed to tell us, depending on the characteristics of the environment and the market, whether or not it is the moment to develop it in a given area and with specific technology.”

“But I haven’t seen this level of debate happening,” he said.

Barnés proposed fomenting water recycling and desalination of seawater, a costly technique that is plagued by environmental concerns, such as where the residue ends up after the extraction of salt.

“This is what we have to resolve, with heavy environmental regulation,” the official said.

There are 435 desalination plants operating in Mexico. The largest is in the northwest state of Baja California Sur, and has a capacity of 200 litres per second, according to the Mexican Institute of Water Technology (IMTA).