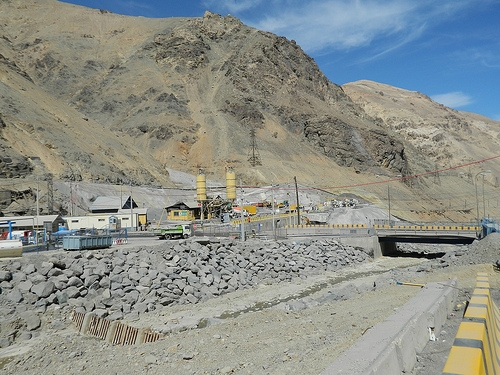 The high cost of energy is a complaint at El Teniente, the biggest underground mine in the world, owned by the Chilean National Copper Corporation. Credit: Marianela Jarroud/IPS

SANTIAGO, Apr 2 2013 (IPS) - The Chilean government has warned of the potential flight of mining and energy investments to Peru because of court rulings that have paralysed large-scale mining projects in the north of the country. But this fear is unfounded, at least in the short term.

Peru and Chile are in the top ten world destinations for investment in non-ferrous metal exploration, according to the Metals Economics Group, which collects information about the industry. In its 2013 report it places Chile fifth and Peru sixth, while Latin America heads the ranking of regions, receiving 25 percent of exploration investment capital.

Chile is the world’s top producer of copper and the country with the largest reserves for future extraction.

Mining investment is concentrated mainly in the north, near the borders with Peru, Bolivia and Argentina, where mines are estimated to consume 80 percent of the area’s electricity.

Against a backdrop of rising energy demand, industry owners have expressed concern about several court rulings and administrative decisions against mining projects.

One high-profile case was that of the Castilla plant, a project of the MPX Energia company owned by Brazilian billionaire Eike Batista, that was to be the largest coal-fired generating plant in South America.

The Supreme Court ordered a halt to the Castilla project in September after the community of Totoral, close to the planned site for the thermoelectric plant in Atacama region, 810 kilometres north of Santiago, filed for an injunction against it.

The ruling against Castilla was apparently the last straw for Batista’s troubled investments in Chile, where his empire is in crisis due to capitalisation of his companies based on market expectations of potential projects that have not been realised.

Six months after the court decision, MMX, another of Batista’s companies, announced that it was abandoning an iron exploration project that was at the geological mapping stage.

MMX said that problems with energy supply would drive up the cost of investment and make the project “less attractive.”

That was when Economy Minister Pablo Longueira said the “painful” decision by MMX must make Chileans aware that “Peru is a market that is becoming increasingly attractive for mining development.”

But according to Lucio Cuenca, the head of the Latin American Observatory of Environmental Conflicts (OLCA), Longueira’s statements are “fictional blackmail” because “Chile, with its strong institutions and its mining and environmental policies, is still the main attraction for mining investment at the international level.

“Of the 320 billion dollars projected to be invested in Latin America from now until 2020 (according to industry estimates), one-third is forecast to be targeted to Chile,” he told IPS.

However, if investments in the electricity sector are delayed, Chile “could end up with a rather limited and expensive energy supply, so that it is not surprising that investments that could have been made here should shift elsewhere,” said economist Jorge Rodríguez Grossi, who served as energy minister in the government of former president Ricardo Lagos (2000-2006).

But in Peru, opposition by indigenous communities to different extraction industry projects creates an “unfavourable” climate, he added.

Marita Chappuis, former director of mining in Peru’s ministry of mines and energy and currently a consultant on the industry, does not believe that mining companies will move from Chile to other countries, “because the problems are basically technical and can be solved, whereas in Peru the problems are predominantly social.”

In this area, “Peru is not a threat to anyone,” she told IPS.

Although there have been no court decisions freezing mining investment in Peru, social protests have succeeded in shutting down mines. Chappuis mentioned the Conga gold mining project, an extension of the Yanacocha mine owned by the U.S. Newmont Mining Corporation, which was planned for the northern region of Cajamarca.

“Protesters succeeded in paralysing a 4.8 billion dollar project whose permits had already been approved and which was under construction. That had never happened before,” she said.

Javier Aroca, a lawyer who worked for over a decade as the coordinator of Oxfam International’s Extractive Industries Programme in the South America region, believes Peru is prepared to receive more foreign investment because the government actively foments it.

The greatest obstacle is “resistance movements against new mining and oil and gas projects in areas where there was no tradition of extractive industries,” he told IPS. “People do not want these industries because they fear losing their livelihoods.”

Social and environmental regulations are stricter in Peru. So when it comes to regulatory frameworks, “extractive investments in Chile have a more favourable environment, which I think is absurd,” he said.

According to researcher José de Echave, former deputy minister of environmental management and a member of the Peruvian NGO CooperAcción, both countries are still attractive to investors.

If a company employs bad practices in Chile, “the authorities in Peru will not necessarily be apprised of its record, which could indicate what kind of relations it would have with the local population,” he told IPS.

In short, said OLCA’s Cuenca, the basic problem faced by the mining industry on both sides of the border is community and social resistance.

“Peasant and native communities, and others, are blocking the foreign investment strategy in the sector of non-renewable natural resource extraction,” he said.

It would be worth analysing why investment projects wind up being disputed in court, said Rodríguez Grossi, who is now dean of the Faculty of Economics at Alberto Hurtado University.

In Chile, zoning laws must be overhauled so that specific areas are established for waste treatment and noisy or dangerous industries, in order to avoid affecting local people, he said.

But in Cuenca’s view, that would not be enough. The mining and energy industries “fuel a highly profitable process of economic growth involving foreign investment. But at the same time they create a lot of problems in the areas where they operate, and local people experience this and are aware of it.” That is why, he concluded, “opposition will continue.”