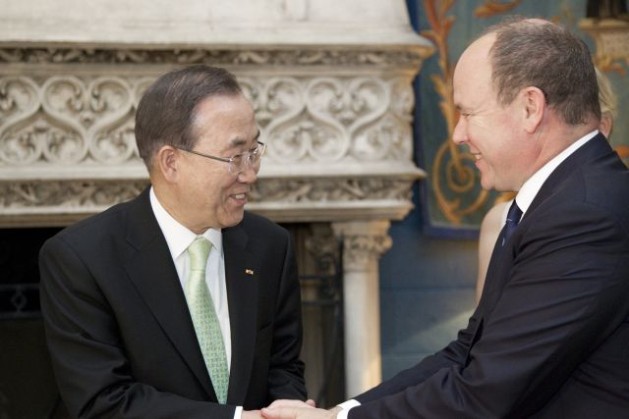 UNITED NATIONS, Apr 9 2013 (IPS) - When Secretary-General Ban Ki-moon visited Kiribati in 2011, he had “an unexpected insight” into the fear that stalks the Pacific Island nation.

Along with toiletries, the hotel room “had an additional item that is not your typical amenity: a life jacket,” he said.

The room was equipped with a personal flotation device, obviously for dramatic effect – just in case the island, along with the hotel, sank into the ocean while the secretary-general was still a guest.

Ban said he joined the country’s president, Anote Tong, to plant mangroves as a guard against rising tides that are poisoning wells and threatening to swamp the island nation of over 100,000 people.

If current trends continue, Kiribati will be one of many vulnerable island nations which could be wiped off the face of the earth due to a sea-level rise triggered primarily by climate change.

Recounting the ecological dangers facing Kiribati, he told a gathering at the Museum of Oceanography in the Principality of Monaco last week that a major global environmental disaster is waiting to happen.

“We continue to lose biodiversity at an alarming rate,” he said, “fish stocks are shrinking rapidly – mostly due to unsustainable commercial fishing. And greenhouse gas emissions are rising and climate change is accelerating.”

The oceans are growing more acidic, threatening the whole marine food chain. The world’s coral reefs are in decline.

“Our consumption is unsustainable. And our ecological footprint is overstepping planetary boundaries,” Ban said. “We must act now to provide a liveable future for the nine billion people who will inhabit the planet in 2050.”

Since the Stockholm Conference in 1972, the Earth Summit in Brazil in 1992, and Rio+20 Conference on Sustainable Development last June, the United Nations has sought to raise awareness of the threat – and the opportunities.

During his two-day visit to Monaco, the secretary-general singled out the contributions made by one of the U.N.’s smallest member states, which has continued to sustain its focus on ecological hazards worldwide.

The secretary-general thanked the reigning monarch, Prince Albert II, for his personal commitment to the protection of biodiversity and the world’s oceans, as well as his work to combat climate change through the Prince Albert II of Monaco Foundation.

Valerie Bruell-Melchior, Monaco’s deputy permanent representative to the United Nations, told IPS Ban’s visit was the first ever by a U.N. secretary-general. The long-planned visit was to commemorate the 20th anniversary of Monaco’s membership in the world body.

When the U.N. Correspondents Association (UNCA) decided to honour journalists for excellence in reporting, the only member state volunteering to dedicate a prize was the Principality of Monaco.

And that prize, a gold medal and 10,000 dollars in cash, was for reporting on climate change, biodiversity and water.

Bruell-Melchior said the award was first launched in 2009 and represented Monaco’s commitment to raise awareness of the world’s environmental problems.

Last year, Inter Press Service (IPS) news agency was the winner of that award, which recognised the collective contributions of a team of IPS reporters, who also covered the U.N. Conference on Sustainable Development in Brazil last June.

J.Tuyet Nguyen, U.N. correspondent for the German Press Agency DPA, and chairman of the UNCA awards committee, told IPS the government of Monaco decided to create the prize, jointly with UNCA, in 2008 when climate issues were hitting the headlines worldwide.

“I would say that the Prince Albert II of Monaco Foundation’s participation in the annual UNCA Awards Dinner and Dance has helped highlight the importance of critical reporting on climate issues – and its continued support will encourage journalists to go into a complex industrial field to bring out the best stories,” he added.

Since the creation of the prize, “We have had enthusiastic responses from journalists around the world who devote time to find out whether government policies and U.N. actions are really working to combat climate change.”

He said the UNCA climate change award will be given out again this year on Dec. 18 in New York “thanks to Monaco’s support.”

Meanwhile, addressing a gathering at Monaco’s Museum of Oceanography last week, the secretary-general said Prince Albert I, who founded the museum, would be devastated to learn what is happening to his beloved marine environment.

“And he would barely recognise the Arctic that he explored. I myself have been to the Arctic and the Antarctic to see the effects of climate change. So has Prince Albert II,” Ban said.

“Like me, the prince understands the risks of doing nothing. And we are approaching environmental tipping points,” Ban cautioned.

In the Arctic, scientists are concerned the North Pole may soon be ice-free in summer, threatening a dangerous feedback loop.

White ice reflects the sun. Dark water does not – it absorbs warmth – and melts more ice, he said.

Another such loop is possible if the permafrost in Siberia and Alaska continues to thaw, releasing stored methane. And methane, he warned, is a far more powerful greenhouse gas than carbon dioxide.

Ban said runaway climate change is a real risk – and a threat to the global environment, to sustainable development and to the security of nations and economies.