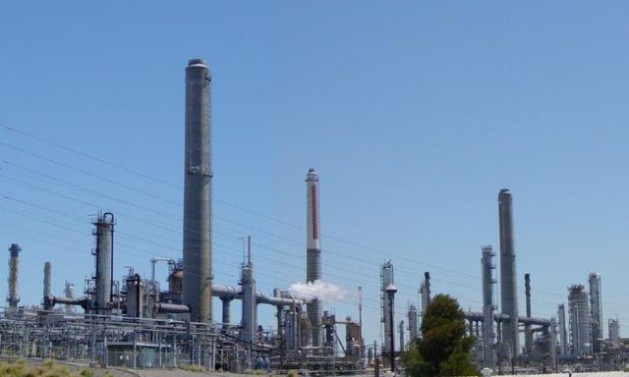 A Shell oil refinery in Martinez, California. Credit: cc by 1.0

WASHINGTON, Mar 27 2013 (IPS) - The International Monetary Fund (IMF) is urging national governments around the world to roll back or eliminate subsidies on petroleum-based energy sources, estimating that this alone could result in a 13-percent decline in global carbon dioxide emissions.

In an unusual new paper marking its full entry into the climate change debate, the Washington-based fund on Wednesday said the cost of “pre-tax” subsidies for these products, when consumers pay less than the cost of supply, stood at about 480 billion dollars in 2011.

Further, the “post-tax” cost of these subsidies – wherein a government doesn’t charge enough to take into account the negative ramifications of energy consumption, including environmental impact – are far higher. Suggesting a figure far higher than previous estimates, the IMF puts this number at around 1.9 trillion dollars, or 2.5 percent of global GDP.

While developing countries and emerging economies account for much of the pre-tax subsidies, IMF researchers have found that developed countries make up some 40 percent of the post-tax total. The United States leads all countries in this regard, at nearly a half trillion dollars in annual subsidies, followed by Russia and China.

The implication is that these countries should be charging consumers far higher for coal, gasoline and other petroleum products, both in order to offset their negative impacts and to give consumers a clearer understanding of the full consequence of their use. Following on previously stated policy, the IMF is also reiterating its support for some sort of carbon tax.

The new estimates on the environmental and other costs of energy subsidies – what the IMF refers to as “externalities” – are far higher than previous such estimates. In part, this is because the IMF is incorporating traffic-related costs, such as from accidents and congestion.

But for the majority of this cost estimate, IMF officials say they are using a fairly conservative figure of 25 dollars per tonne of carbon dioxide, from a widely referenced 2010 study by the United States Interagency Working Group on Social Cost of Carbon. Other estimates for this number have been significantly higher, up to 80 dollars per tonne.

The new paper looks into the environmental impact of energy subsidies, including the distortions that subsidies cause by leading consumers to make decisions without reference to their full impact. But it also outlines several additional ramifications of these practices, particularly in developing countries.

For instance, over decades these subsidies have been found to crowd out investment in energy production, including in renewables. Simultaneously, they constrict state coffers such that governments have less money with which to fund public spending, for instance on education, health or infrastructure.

“In countries across sub-Saharan Africa, governments are spending an average of three percent of GDP on energy subsidies – the same as on public health – so reducing these subsidies would free up space for more productive spending that is much needed,” Roger Nord, a senior advisor in the IMF’s African Department, told reporters Wednesday.

“As elsewhere, energy subsidies in Africa benefit principally those who are already better off. Take electricity – the poor are typically not even connected to the grid; they don’t have air conditioning or SUVs.”

There have been examples of success in this regard. Proponents point to Ghana, for instance, which was able to reduce subsidies and, in turn, to allocate part of those savings to rural electrification. Likewise, when Kenya liberalised its energy sector it was able to double new investments in power generation in just 10 years, a stark contrast with many other African countries.

At a time of continued concern over mounting debt in capitals throughout the world, the IMF is emphasising the short-term implications that reducing or eliminating energy-related subsidies would have on governments in search of new revenues. And indeed, coupled with the new and increasing concern over global climate change, it would seem as though the push to roll back subsidies would be newly pertinent for many policymakers.

Yet while Wednesday’s paper constitutes the most significant public stance the IMF has taken on this issue, the fund’s research teams have telling governments for years that reducing subsidies would bring in additional revenue – with relatively little change on the ground.

Likewise, as energy costs have increased, other multinational groupings have begun to raise alarms. Most prominently, the Group of 20 (G20) countries have now twice committed to halting “inefficient” energy subsidies over the “medium term”.

Yet according to the new analysis, most countries have seen little progress in following through on this pledge. Certainly this is the case in the world’s largest subsidiser, the United States.

“The United States government has subsidised fossil fuels for the past 100 years,” Doug Koplow, the founder of Earth Track, an energy subsidy watchdog, told IPS.

“We subsidise the extraction, capital formation and clean-up of extraction sites, as well as offer corporate structures that entirely exempt oil and gas companies from corporate taxation. In the last two decades, we have also started significant subsidies for renewable energy. To a great extent, this is all just hardwired into the system.”

Meanwhile, despite widespread understanding that change is needed, significant political inertia on the subject here does not appear to be dissipating.

“Almost every year we get new proposals to reform these subsidies that inevitably get defeated, and I don’t have a lot of confidence that will change in the near future,” Koplow says.

“In some countries – New Zealand is a typical example – severe fiscal crises have indeed allowed governments to deal with all of their energy subsidies at once, and this could happen in the U.S. as well. But the politics on this stuff is fierce.”