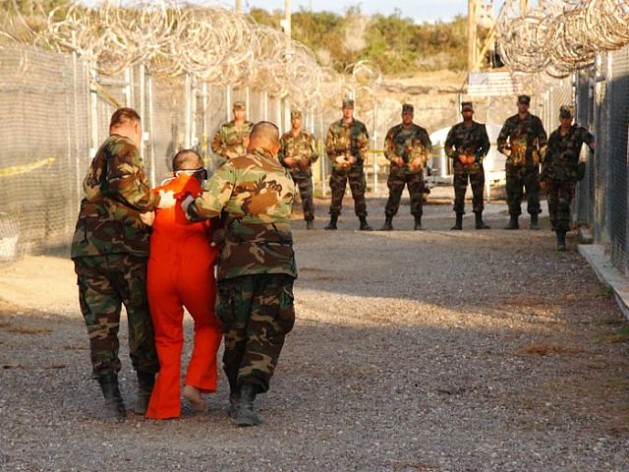 WASHINGTON, May 1 2013 (IPS) - With at least 100 detainees now participating in a three-month-old hunger strike, U.S. President Barack Obama Tuesday reiterated his earlier denunciations of the Guantanamo detention facility and blamed Congress for preventing its closure.

Speaking at a White House news conference, he said he has asked his staff “to review everything that’s currently being done in Guantanamo, everything that we can do administratively” and promised to “re-engage with Congress to make the case that this is not something that’s in the best interest of the American people. And it’s not sustainable.”

"The notion that we’re going to continue to keep over a hundred individuals in a no-man’s land in perpetuity...that is contrary to who we are." -- U.S. President Barack Obama

“I think it is critical for us to understand that Guantanamo is not necessary to keep America safe,” he said. “It is expensive. It is inefficient. It hurts us in terms of our international standing. It lessens co-operation with our allies on counter-terrorism efforts. It is a recruitment tool for extremists. It needs to be closed.”

His remarks followed the announcement that the Navy has sent some 40 additional medical personnel to Guantanamo to deal with the spreading strike.

At least 21 of the strikers, five of whom have been hospitalised, are reportedly being force-fed in a procedure which the American Medical Association (AMA) has denounced as a violation of the profession’s “core ethical values”.

Obama, however, indicated Tuesday that he supported these measures. “I don’t want these individuals to die,” he said.

While welcoming Obama’s renewed commitment to close the prison, attorneys for detainees and human rights groups stressed that Obama could take a series of steps without Congress to improve the situation, notably by repatriating more than half of the remaining 166 detainees.

“Congress is certainly responsible for imposing unprecedented restrictions on detainee transfers, but President Obama still has the power to transfer men right now,” according to the Center for Constitutional Rights (CCR), a leader in the legal battle over Guantanamo since terrorist suspects were first sent there from Afghanistan and Pakistan in early 2002.

“He should use the certification/waiver process created by Congress to transfer detainees, starting with the 86 men who have been cleared for release,” the New York-based group said.

Under a 2012 law, the secretary of defence may order detainees returned to their homelands or to third countries if he certifies on a case-by-case basis that they will pose no future threat to U.S. national security.

Eighty-six prisoners, including 56 Yemenis, have been cleared for release by Pentagon review boards to date, but the administration has not yet certified them, apparently due to fears that that if any of them are subsequently implicated in anti-U.S. terrorist activity, the political backlash could be too costly.

According to a recent U.S. intelligence study, between 16 and 27 percent of previously released detainees have participated in terrorism since they left Guantanamo.

“(The law) as written allows the president to transfer individuals if it’s in the national security interest of the United States,” noted Carlos Warner, who represents 11 detainees. “The president’s statement made clear that Guantanamo negatively impacts our national security, (so) the question is not whether the administration has the authority to transfer innocent men, but whether it has the political courage to do so.”

Whether Obama’s strong remarks Tuesday signal a new determination on his part and that of his new Pentagon chief, Chuck Hagel, to take advantage of the certification authority under the 2012 law remains unclear, although his vow to consult with Congress suggested to some observers that he would be seeking more political cover before taking such a step.

“(U)ltimately, we’re going to need some help from Congress, and I’m going to ask some folks over there who care about fighting terrorism but also care about who we are as a people to step up and help me on it,” he said.

The administration of President George W. Bush detained a total of 779 suspected terrorists at Guantanamo but had repatriated some two-thirds of them to their homelands or third countries by the time Obama promised on his first day in office in January 2009 to close the facility within one year.

His efforts to do so, however, were blocked by Congress which enacted legislation preventing the transfer of detainees to U.S. soil and greatly restricting the administration’s power to repatriate them, particularly to countries, such as Yemen, suffering significant internal instability.

The Obama administration itself imposed a freeze on all transfers to Yemen after the attempted bombing of a U.S.-bound airliner in December 2009 by a Nigerian national who had allegedly been trained in Yemen.

While the administration had succeeded in repatriating or resettling about 80 detainees in its first two years in office, progress ground to a halt by 2011.

Earlier this year, the State Department shut down the office of the special envoy in charge of repatriating cleared prisoners, one of a series of steps – including Obama’s failure to mention Guantanamo in his most recent inaugural and State of the Union addresses and the failure to initiate promised annual reviews of detainees who had not been cleared for repatriation — that contributed to the deepening despair and desperation of the remaining detainees, according to both their lawyers and Pentagon officials.

The detainees “had great optimism that Guantanamo would be closed. They were devastated …when the president backed off,” Gen. John Kelley, the head of the U.S. Southern Command (SouthCom), which has jurisdiction over the facility, told Congress
last week, before the spreading hunger strike drew national attention.

In addition to the 86 detainees who have been cleared for release, nine, including the operational “mastermind” of the 9/11 attacks, Khalid Sheik Mohammed, have either been convicted or are being tried before military commissions that have been attacked by civil and human rights groups as lacking due process.

Another 46 detainees have been deemed too dangerous to release but cannot be tried either because the evidence against them would be inadmissible in court (due to its acquisition by torture or other illegal methods) or whose alleged acts did not amount to a crime under U.S. law. They were designated for indefinite detention during Obama’s first term.

In his remarks Tuesday, Obama appeared to distance himself from indefinite detention, which has been denounced by the U.N. High Commissioner for Human Rights as a violation of international human rights law.

“The notion that we’re going to continue to keep over a hundred individuals in a no-man’s land in perpetuity, even at a time when we’ve wound down the war in Iraq, we’re winding down the war in Afghanistan, we’re having success defeating Al-Qaeda core … — the idea that we would still maintain forever a group of individuals who have not been tried, that is contrary to who we are, it is contrary to our interests, and it needs to stop,” he said.

“President Obama’s call to end indefinite detention at Guantanamo is encouraging after his long silence on the issue,” said Laura Pitter, counter-terrorism adviser at Human Rights Watch (HRW), although she also noted that he was unclear whether his critique extended to detainees deemed to dangerous to release.