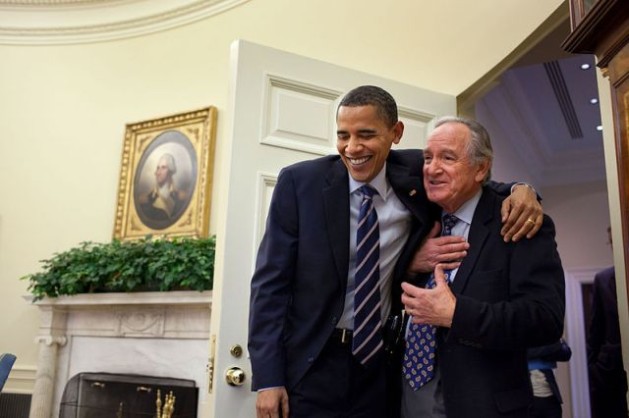 President Obama with Sen. Tom Harkin at the door of the Oval Office. Harkin introduced the Fair Minimum Wage Act of 2013, which currently has 29 co-sponsors. Credit: Official White House Photo by Pete Souza

ATLANTA, Georgia, May 29 2013 (IPS) - During his State of the Union address earlier this year, U.S. President Barack Obama spoke about the need to increase the federal minimum wage, which Congress has not voted to raise since 2007.

But while several legislative proposals have been introduced to raise the federal minimum wage, they have not gone anywhere.

"Inequality in the U.S. has been growing for decades and those at the very top are getting most of the rewards for growing productivity in this economy." -- Roger Hickey of the Campaign for America’s Future

In the U.S. Senate, where federal minimum wage increase legislation is more likely to pass because it is majority Democratic, one committee hearing has been held but no vote as of yet.

On Mar. 15, the House considered the legislation indirectly, when a motion was made to add the federal minimum wage increase to unrelated workforce development legislation. That motion failed 184 to 233, with not a single Republican voting yes, and a few Democrats joining nearly all Republicans in voting no.

“We know our economy is stronger when we reward an honest day’s work with honest wages.  But today, a full-time worker making the minimum wage earns 14,500 dollars a year.  Even with the tax relief we put in place, a family with two kids that earns the minimum wage still lives below the poverty line.  That’s wrong,” Obama said during his Feb. 12 remarks to the nation.

“Tonight, let’s declare that in the wealthiest nation on Earth, no one who works full-time should have to live in poverty, and raise the federal minimum wage to nine dollars an hour.  We should be able to get that done,” he said.

“When I heard that, I nearly jumped through the TV and kissed him,” Rev. Harriet Bradley, co-chair of the Atlanta chapter of 9to5, an advocacy organisation that promotes the policy concerns of working class women, told IPS. “He was telling the truth.”

The current federal minimum wage is seven dollars and 25 cents per hour.  This is what Rev. Bradley makes in her full-time job as a caregiver.  She provides home-based health care for people who qualify under Medicare.

Bradley also receives a two-dollar per hour mileage reimbursement, but no healthcare or any other benefit from her job. She lives in an extended stay hotel – where she pays rent by the week, rather than by the month – because she finds it to be more economical than an efficiency apartment.

When asked how she survives on such a wage, she cites “the Lord.  Jesus Christ does this every day.”

The most recent minimum wage increase was in 2009, the last increase implemented pursuant to Congress’s 2007 vote.

The federal minimum wage today is worth 31 percent less than what it was at its peak in 1968, even as productivity has increased.  If the federal minimum wage had kept pace with inflation since 1960, today it would be more than 10 dollars per hour.  If it had actually kept pace with the increased productivity of U.S. workers, it would be 22 dollars per hour.

Because the federal minimum wage is below the poverty line, many workers are forced to rely on safety net programmes such as public or subsidised housing, food stamps, and the like.

On Mar. 14, the Senate’s Health, Education, Labor, and Pension (HELP) Committee held a hearing regarding increasing the federal minimum wage, and, for what would be the first time in U.S. history, requiring future increases to be tied to inflation.

Only three senators attended the hearing: Sen. Harkin; Lamar Alexander, a Republican from Tennessee; and Elizabeth Warren, a Democrat from Massachusetts.

A strong advocate for working class people, Harkin is retiring at the end of this term. However, passing the federal minimum wage increase before then is a top priority for him.

At the hearing, Warren was very critical and aggressive in her questioning of two small business owners who claimed that forcing them to raise their wages would also force them to lay off workers.

At the hearing, Dr. Arindrajit Dube, a professor of economics at the University of Massachusetts, testified that in states that had raised the minimum wage at the state level, there had been few or no job losses as a result.

Raising the federal minimum wage is “important because inequality in the U.S. has been growing for decades and those at the very top are getting most of the rewards for growing productivity in this economy,” Roger Hickey, co-director of the Campaign for America’s Future, told IPS.

“An increase in the minimum wage, which hasn’t happened in many years, would not only be good for those families that are trying to put bread on the table… It would be good for economic growth if more low-wage people had a wage increase,” he said.

“You would suddenly have more demand in the economy for the goods and services that corporations produce and we’d have more growth, and therefore, more jobs, so it’s a win, win, win. I think generally it’s accepted that will be acted upon after the immigration bill is debated and hopefully passed. ..If Republicans stall or defeat a vote in the House, it will certainly become an election year issue.”