Indigenous communities in northern Nicaragua are demanding that the authorities take urgent action to halt the attacks on their lives and territory by illegal invaders. 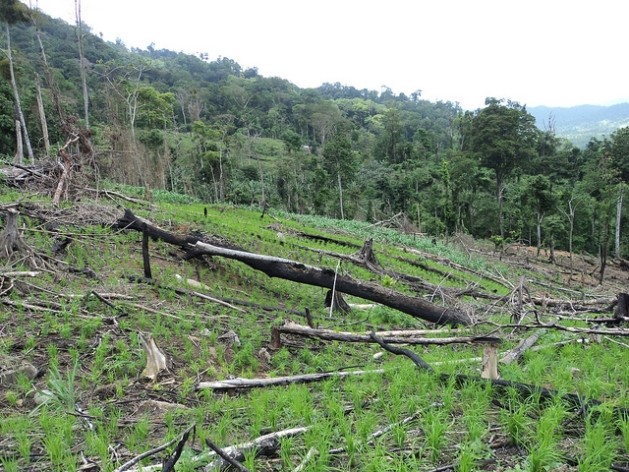 Logging is one of the main threats in the southern area of the Bosawas Biosphere Reserve. Credit: José Garth Medina/IPS

MANAGUA, May 15 2013 (IPS) - Mayangna indigenous communities in northern Nicaragua are caught up in a life-and-death battle to defend their ancestral territory in the Bosawas Biosphere Reserve from the destruction wrought by invading settlers and illegal logging.

The president of the Mayangna indigenous nation, Aricio Genaro, told Tierramérica that their struggle to protect this reserve, which is still the largest forested area in Central America, was stepped up in 2010, due to the increased numbers of farmers from eastern and central Nicaragua moving in.

In addition to the destruction of natural resources, this invasion has turned violent and poses a serious threat to the biosphere reserve’s indigenous population, estimated at roughly 30,000. Since 2009, 13 indigenous people have been killed while defending their territory, said Genaro.

The latest victim of this violent confrontation was Elías Charly Taylor, who died from gunshot wounds he received in the community of Sulún on Apr. 24, when returning from a protest demonstration against the destruction of the forest.

This protest, initiated in February, has drawn the attention of the government of leftist President Daniel Ortega and publicly exposed the destruction of Bosawas, which encompassed more than two million hectares of tropical forest when it was designated a Biosphere Reserve and World Heritage Site by the United Nations Educational, Scientific and Cultural Organisation (UNESCO) in 1997.

According to a study published in 2012 by the German Agency for International Cooperation (GIZ), the Nicaraguan National Union of Farmers and Ranchers, the European Union and Oxfam, if deforestation were to continue at its current rate, all of the reserve’s forests would be wiped out in 25 years.

The Mayangna live from hunting and fishing, domestic livestock raising and subsistence agriculture, growing crops like corn, beans and tubers with traditional methods. But their way of life has been severely impacted by the invading farmers.

“They shoot everything, burn everything, poison the water in the rivers, and chop down the giant trees that have given us shade and protection for years, and then they continue their advance, and nothing stops them,” said Genaro.

“You don’t see tapirs anymore, the pumas and oncillas (tiger cats) have fled the area, you no longer hear the singing of the thousands of birds that used to tell us when it was going to rain. Even the big fish in the rivers are gone. Everything is disappearing,” he said.

According to Kamilo Lara of the National Recycling Forum, a network of non-governmental environmental organisations, more than 96,500 hectares of forest have already been destroyed within the protected core of the Bosawas Biosphere Reserve.

Lara added that “55 percent of the forests in the so-called buffer zone, where some 20,000 mestizo farmers (of mixed indigenous and Spanish ancestry) have settled, have been cleared to sell the timber, to create pastures for cattle grazing, and to grow crops for commercial purposes.”

Jaime Incer Barquero, a presidential advisor on environmental affairs, told Tierramérica that the national authorities need to speed up protective measures “before the reserve loses its status (as a UNESCO biosphere reserve) and the world loses the reserve.”

This view is shared by the UNESCO representative in Nicaragua, Juan Bautista Arríen, who believes that “urgent and firm action” must be taken to protect both the indigenous population and the natural environment.

In response to the denunciations from indigenous communities and environmentalists, the Ortega administration has begun to implement a number of measures to deal with the destruction of the reserve. It has authorised the use of force, sending in 700 members of the Nicaraguan army’s newly formed Ecological Battalion along with a roughly equal number of police officers, for the initial purpose of controlling the violence between the settlers and the indigenous inhabitants of the reserve.

A commission of national authorities was also formed to coordinate actions and implement an “iron fist” policy against individuals and organisations responsible for damaging the environment.

After visiting the area early this month and observing the damage first hand, the authorities issued Decree 15-2013, which created a permanent Inter-Institutional Commission for the Defence of Mother Earth in Indigenous and Afro-Descendant Territories of the Caribbean Coast.

The main function of this commission, created to “strengthen the regime of autonomy of the Caribbean coast,” will be to enforce ancestral land rights in indigenous territories in conjunction with the corresponding agencies, as well as to promote the joint adoption and implementation of measures with local and regional authorities to protect the reserve’s biodiversity.

In addition, a series of criminal, administrative and civil court proceedings will be initiated against all individuals charged with destroying or threatening the environment and the rights of indigenous communities.

In accordance with the law that established the North Atlantic and South Atlantic Autonomous Regions, indigenous territories may only be occupied and used productively by members of native communities.

The director of the Centre for Environmental Policy Initiatives, sociologist Cirilo Otero, endorsed the protective measures, but warned that the implementation of coercive measures to protect the environment, unless they are accompanied by policies to support the small farmers who are moving into the reserve as a way of escaping poverty, could give rise to a socio-economic conflict and more violence.

The government has approached the general director of UNESCO, Irina Bokova, to present the problem and request assistance, while the country struggles to halt the destruction of the last major forested area in Central America through its own means.