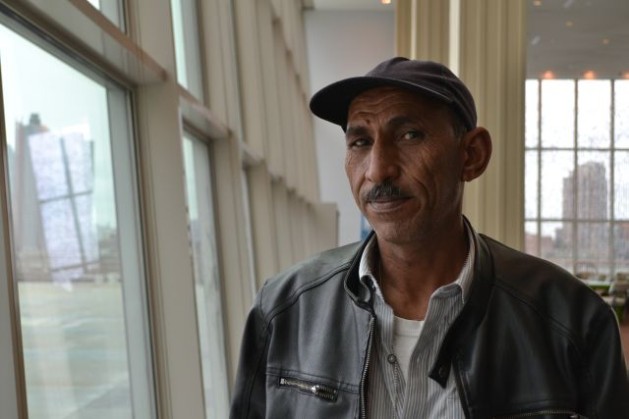 UNITED NATIONS, May 30 2013 (IPS) - For thousands of years the Bedouin people have made their home in the desert of what is now Israel. But for almost the last six decades, the Bedouin have been on the move, repeatedly relocated to make room for Israeli settlements.

As the Bedouin fight to be recognised as an indigenous people by Israel, Eid Jahalin, 49, who lives in the desert near the Jerusalem area, is advocating for them. Jahalin believes that “land without people” is Israel’s sole focus, while the Bedouin’s vast knowledge about living in the desert, practiced over centuries and crucial to preserve with climate change looming, stands to be lost.

"Many children, some eight and younger, have diseases after being born next to the garbage dump." – Eid Jahalin

IPS correspondent Lucy Westcott spoke to Jahalin, who was in New York City and the United Nations for the first time, about the current state of the Bedouin and how their relocation impacts climate change.

Q: What are the most recent developments by the Israeli government concerning relocation of the Bedouin?

A: The Israeli government is continuing with the same proposals, the same project, and they’re working faster. There is no pressure on Israel and nobody is stopping the plan.

A few days ago there was resistance to the plan because when it was published at the beginning of last week, the settlers talked about a Bedouin city in Nuweimeh. The settlers said they don’t want to give a “prize” to the Bedouin when they have been told, because of Secretary of State John Kerry, who recently visited Israel, that they have to stop their settlement plans.

Moshe Ya-alon, the minister of defence, is new and he said he will study the Bedouin relocation plan, so at the moment there’s a little less pressure. I believe that the government and settlers are working together, that they’re partners. When there is pressure and the government is stuck in the mud, then they activate the settlers, and then they say it’s the settlers. What they can’t do, they get the settlers to do.

There are 2,300 Bedouin in 20 communities in the hills east of Jerusalem, and more than 80 percent of them are refugees, according to 2011 United Nations figures. Over two-thirds are children.

The issue of displacement and abandonment of the Bedouin’s livelihood and traditional culture is becoming an international priority. On Tuesday, the United Nations Relief and Works Agency for Palestine Refugees released a report with Bimkom that called the deteriorating social and economic conditions of the Bedouin “non viable”.

It is the first report of its kind about the forced relocation of 150 families, which started in 1997, to Al-Jabal village, located nearest the largest rubbish dump in the West Bank. Seven hundred tonnes of waste are deposited there daily. The Bedouin have been relocated to make room for Israel’s settlements, which are illegal under international law.

Q: How long has this situation been going on for?

A: It’s been going on since 1967. From 1967-78, it was only an issue with the army, who would take land and declare it as a military zone. A year and a half later they would give that land to the settlers. After 1978 began all the chaos with the settlers.

The last major forced displacement was in 1997-8 and almost 2,000 people were displaced. During that time, there was a process of taking those families and people and putting them in containers, leaving them next to the garbage dump. To this day, there are some people who don’t have money who are still living there, in tin shacks.

Q: What is the situation like for the Bedouin in 2013?

A: One of the worst problems is that many children, some eight and younger, have diseases after being born next to the garbage dump, that not even Hadassah, the main Israeli hospital in Jerusalem, recognises. There is one family – a mother, father and three children – that have this disease, and nobody knows what it is. Hospitals have said it’s the first time they’ve seen this disease and it’s unusual. The children are sick to this day, staying at home with the parents.

A: If only the Israeli government would leave the Bedouin alone. They’ve closed access to the road for the school, for the whole community, and that’s their help?

And if they, the Israeli government, say ‘we’re helping the Indigenous people,’ I want to hear one example.

Q: What specialised knowledge about living in the desert do the Bedouin stand to lose with continued relocation?

A: A month ago, for example, I was down in the JordanValley in Jericho, and everybody was complaining about the unusually extreme heat. When I went home, none of my family was complaining about the heat because as Bedouin, we’re used to the heat and know when to go in the sun and when not, when there is danger in the desert and when there’s no danger.

In New York, I don’t know exactly where I am, but if I’m in the desert, I know everything. The weather is changing these days, but now we have to think forward and think what needs to be done. Because I live in the desert, it’s easy for me to deal with the changes, not like in the city or in villages.

This planet is a very small ball. If somebody makes a problem or damages on one side, then we feel it on the other, so we have to protect the land.

Q: As this is your first time at the United Nations, what do you hope the community will learn about the situation of the Bedouin people?