UNITED NATIONS, May 15 2013 (IPS) - Eighteen days ago, Diane Wilson, a 65-year-old fisherwoman from Texas, decided to go on a hunger strike. 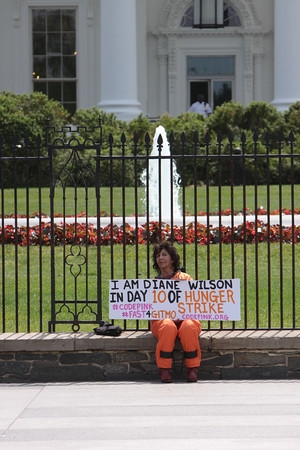 Dressed in an orange jumpsuit, Wilson has been protesting outside the White House gates for over two weeks now. Her demand: Shut down Guantanamo Bay prison.

U.S. President Barack Obama has come under heavy criticism for his failure to close down the facility at Guantanamo Bay in Cuba. Obama has blamed the Congress for not supporting the closure. But experts and activists suggest that Obama can at least start the process by transferring detainees who have been cleared of all charges.

The detention facility at the Guantanamo Bay opened in 2002. According to reports, 100 out of 166 prisoners are on hunger strike. Some of the prisoners are being force-fed. Human rights groups have strongly condemned this technique of force-feeding prisoners, labeling it a form of torture.

This is not the first time Guantanamo Bay prison has witnessed hunger strikes. The first one dates back to 2005 where close to 200 detainees were on hunger strike.

Q: What do you want to achieve through this hunger strike? As you know, many prisoners at the Guantanamo Bay prison have been cleared of all charges, but some are still awaiting trial.

A: The facility should be closed down – this is what I want. I am fasting in solidarity with those prisoners at Guantanamo, simply because they want justice. It is pretty much well known that President Obama can shut down Guantanamo right now. He can do it. He should have done it yesterday.

Q: What would you do if your body just gives up, given that you are a 65-year-old woman surviving on water, a pinch of salt and a potassium tablet for 17 days now?

A: Whenever such thoughts cross my mind, I think about those men in Guantanamo.

"I am a constant reminder of the conditions under which the prisoners at Guantanamo Bay live." -- Diane Wilson

I get to lay down on a soft bed at night. I get to talk with people and I don’t have to sit in a cold, freezing room. I am not humiliated and tortured and I think if they can do it, I can do it.

Moreover, this is not my first time fasting for many days at a stretch. I had fasted for 30 days. The longest I had fasted was for 45 days when I was protesting to stop Valero from processing tar sands in Houston, Texas. I was little bit younger then, but age definitely takes its toll. This is early in the game though.

Basically, I am an optimistic person and I really believe that people can make a difference. In a way I have surrendered to the fast. I will take it as far as I can. I don’t mind collapsing. All I got to do is think of those men in Guantanamo. I know we can shut down the facility, and if required I am ready to go that far.

Q: Why did you choose the White House as the venue for your protest?

A: I am protesting directly in front of the White House. It is a strategic zone. A few days ago I locked myself to the White House gates. I wear an orange jumpsuit and makeshift chains round my legs and neck. I also wear a black hood over my face. This is my way of representing those men in Guantanamo in front of the Obama administration.

I am a constant reminder of the conditions under which the prisoners at Guantanamo Bay live. To propel any change, you have to be in their faces, and I am in their face.

Q: How do people react when they see you protesting outside the White House?

There are a lot of children who are brought to see the White House and they are always very curious. We got a huge poster of Obama with a statement that says Guantanamo is inefficient, expensive and in no way keeps America safe. In fact it is a recruiting tool because of the way the prisoners are being treated.

There are a lot of international guests and they are always curious and many people come and speak to us. We have had senators coming up and telling us that we were doing a good job. Actually some came up to us and shook our hands. They said that we should keep it up. In fact, it is a matter of keeping up. That is what it is.

Q: Who is your inspiration?

A: I take a lot of my inspiration from Gandhi. He is my man.

A: When people ask me, I say I am a fisherwoman. I am a fourth generation shrimper. I did not do anything until I reached 40 and I am a really late bloomer.

I think there are a lot of problems with the recent movements – you got the environmental, you got the indigenous, you got the human rights and they tend to remain in separate camps. But there is a connection between all of them.

I guess because I am a fisherwoman and I lived my life on the bay and there is no sense of boundaries so my activism has flowed.

Q: What has been the reaction from your family?

A: I generally don’t tell them what I am doing and I let them find out. My family members are by and large Republicans and they love George Bush. They don’t like this kind of out there and in your face like action from me. So it is not fun.

Q: Diane, you are the author of book called “An Unreasonable Woman”. Do you think you are being unreasonable in your demands?

A: No, I am not unreasonable. I am asking for these men’s lives.