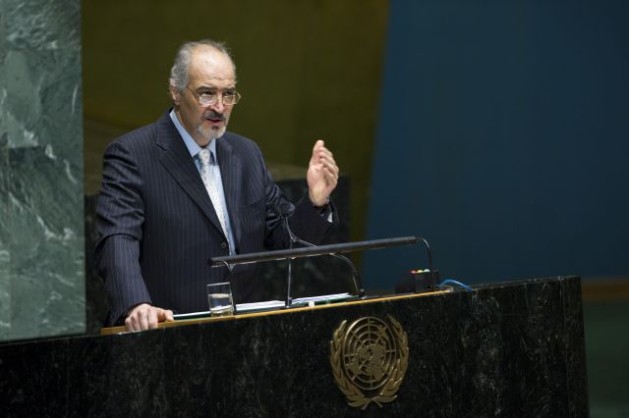 Bashar Ja’afari, Permanent Representative of the Syrian Arab Republic to the UN, addresses the Assembly on May 15. Credit: UN Photo/Evan Schneider

UNITED NATIONS, May 15 2013 (IPS) - When the 193-member General Assembly voted Wednesday to condemn the beleaguered government of Syrian President Bashar al-Assad, there was an increase in the number of sceptics who neither supported nor opposed the tottering regime in Damascus.

As the number of supporters to the resolution declined, from 133 to 107, the abstentions increased significantly, from 31 to 59, including a mix of Asian, African and Latin American countries.

Asked for a response, Jose Luis Diaz, Amnesty International’s U.N. representative in New York, told IPS, “I think the number of abstentions – and the divisions in the General Assembly – are the consequence of political considerations.”

He said some countries would have preferred to give space to a renewed push for negotiations in the wake of the recent agreement between Russia and the United States, including a proposed international conference on Syria.

“They abstained because to vote ‘no’ would have been to side openly with Assad and to ignore the appalling crimes taking place in Syria,” Diaz said.

“All in all,” he said, “I don’t think there’s much disagreement among the vast majority of the General Assembly members – not counting the Syrian government and its supporters, like Russia, China and North Korea – about what is needed in Syria.”

As expected, China and Russia voted against the resolution, as they did in the Security Council when they exercised their vetoes on three Western-sponsored resolutions condemning the Syrian regime and the killing of civilians.

The resolution, drafted by Qatar and co-sponsored or backed by most of the Arab countries and Western powers, recognised the Syrian National Coalition as “effective representative interlocutors needed for a political transition” in Syria.

Unlike resolutions adopted by the Security Council, General Assembly resolutions are not legally enforceable.

Asked if the resolution will have any impact, Luis Diaz told IPS, “It probably won’t have an immediate impact, but one good thing would be if it builds pressure on the Security Council to take up the issue again and press for binding action.”

Lost in the highly political debate on the resolution text, he said, was the fact that it has the strongest language on accountability of any of the previous General Assembly resolutions on Syria.

Russia, which lobbied last week against the resolution, described it as “very harmful and destructive”.

U.S. Deputy Permanent Representative Ambassador Rosemary DiCarlo told delegates Tuesday that over the last 26 months “we have witnessed a brutal conflict in Syria”.

She said the Assad regime, drawing upon an arsenal of heavy weapons, aircraft, ballistic missiles, and potentially chemical weapons, has killed or injured untold numbers of civilians who for many months manifested their opposition purely through peaceful protest.

She said the sustained violence has created a severe humanitarian crisis with more than 1.4 million refugees and 4.25 million internally displaced persons within Syria.

“The consequences of this crisis are growing more dire not only within Syria, but across the region,” DiCarlo said.

She singled out the generosity of the governments and people of Lebanon, Jordan, Turkey, Iraq and others who host large numbers of refugees “which has been extraordinary.”

“But these countries now face grave threats to their security and an overwhelming economic burden. It is clear that we need a Syrian-led peaceful political transition,” she added.