Kurds Advance, Into the Unknown 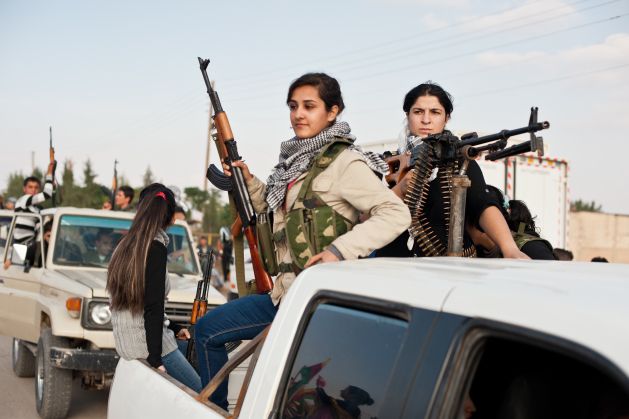 Women like these in Derik play a key role in the Kurds revolution in Syria. Credit: Giulio Petrocco/IPS.

GIRKE LEGE, Syria, Jun 18 2013 (IPS) - A ban on political and even social gatherings, a bar on Kurdish language and culture; uprooting people, forced disappearances and a ‘caste’ of hundreds of thousands of local Kurds deprived of citizenship… life for Kurds in pre-war Syria was probably as dire as it is today for their kin in Iran.

After decades of brutal repression at the hands of President Assad and earlier his father president Hafez Assad, Syrian Kurds had attempted to revolt in 2004. So it came as no surprise that they joined the uprising in March 2011.

A few months later they were shaking off the control of Damascus by manning their own checkpoints and ensuring an area where social centres, Kurdish schools and political parties – both new and those in hiding for decades – would pop up in their dozens.

However, it was striking for many that while Aleppo – Syria’s second largest city 300 kilometres north of Damascus – was being levelled to the ground by Assad’s fighter jets, Kurdish militiamen told IPS that they had “not fired a single shot.”

“From the very beginning, the Kurds in Syria have been committed to their own peaceful revolution meant to bring peace and democracy to the country,” Salih Muslim told IPS in Qamishli, 680 kilometres northeast of Damascus. This former chemical engineer is the leader of the Democratic Union Party (PYD), the dominant party among the Kurds of Syria which has an ideology akin to the Kurdish Workers Party (PKK), an armed movement seeking rights and recognition for Kurds within Turkey.

“We knew that Assad’s regime would not collapse in just two months, so we organised our people in civil defence committees to ensure the safety in our areas.”

While Kurdish colours – yellow, green and red – are hegemonic in Kurdish-controlled areas, they are hardly visible in areas controlled by the Arab opposition. The Kurdish resurgence seems a parallel, if silent revolution.

Today, the Kurds of Syria are grouped around over 30 political parties. The biggest have strong links with Kurdish political parties in Iraq or Turkey. The Kurdish parties of Syria differ in the status they seek, ranging from an autonomous region similar to Kurdistan in Iraq – almost a de facto state – to a more humble yet ambitious “recognition of the constitutional rights of the Kurdish people of Syria”, according to Muslim.

“Damascus is not afraid of us because we aren’t even demanding an autonomous region,” Muslim told IPS. “We’re only looking for democratic self-determination within Syria’s borders.”

Kurds are still in control of their areas in north-eastern Syria in precarious balance between the Free Syrian Army (FSA) and Assad’s army.

One of the major hurdles in a dialogue between the warring parties is the increasingly fragmented Arab opposition. The involvement of groups linked to Al-Qaeda like Jabat al-Nusra, has even led to former FSA fighters joining the Kurdish militia in Aleppo, where the Kurdish controlled neighbourhoods Sheikh Maqsood and Ashrafieh in the north-west of the city have been repeatedly bombed by Assad’s jets.

One of the Syrian Kurds’ greatest achievements since the beginning of the uprising was the union of all their factions in July 2012 under the auspices of Massoud Barzani, president of the Kurdish Autonomous Region of Iraq. Harmony among them is still far from complete but a common enemy seems to work as an effective unifying force.

Moreover, many PKK fighters are reportedly heading for Syrian Kurdistan after Abdullah Ocalan – the PKK’s imprisoned founder and leader – declared a ceasefire and a pull out from Turkey in March. Such a move would add to the logistical support funnelled by the Iraqi Kurds which has proved vital for those in Syria.

But uncertainty has overshadowed the region since the very beginning of the war. Syrian Kurds are already familiar with Assad’s policies, but could an opposition-led government in Damascus be any better?

Muslim claims that the Kurds “will fight for their rights no matter who wins the war” but senior political and military opposition leaders have repeatedly and publicly declared that they are far from eager to recognise the rights of the Kurds in Syria.

This came as no surprise to the PYD leader: “Not happy with us just being Muslims, these people also want us to be Arabs,” said Muslim, pointing to a mentality “deeply rooted in the region for centuries and perpetuated by both the Assads as well as the core of the Syrian insurgents.”

For the time being, the revolts shaking North Africa and the Middle East since 2011 hardly include non-Arab indigenous peoples. While Libya’s Berbers still wait for recognition in post Gaddafi Libya, Egypt’s Copts are constantly threatened since the collapse of the regime of former Egyptian president Hosni Mubarak. The Kurds in Syria are also aware that this is all about an “Arab” Spring.

In the last few weeks Damascus has achieved important victories to the point that the Syrian army is already planning a final assault on Aleppo. Those living in the city’s Kurdish neighbourhoods, and elsewhere in Syria, are starting to wonder what might happen if Assad’s soldiers finally end up knocking on their doors.

‘The mountains are the Kurds’ only friends’, local Kurds often say about this nation historically massacred by local rulers and betrayed by foreign powers. Despite their isolation in Turkey, Syria, Iran and Iraq, Kurds have taken major steps forward towards recognition in the last three decades. Could those in Syria possibly take advantage of this unique opportunity and set yet another landmark?

With Russia and Iran backing Assad and the West offering military support to the Sunni insurgents, the international community is split in two blocs. It’s a Cold War scenario where “third ways” will hardly be considered, and which leaves Syrian Kurds’ fate fully dependant on solidarity from Kurds in Iraq and Turkey.