UNITED NATIONS, Jun 11 2013 (IPS) - Author Malcolm Gladwell draws on the science of epidemiology in his book “The Tipping Point” to explain how ideas spread through a population, in the same way as an infectious disease can proceed from a few cases to a full-blown pandemic. 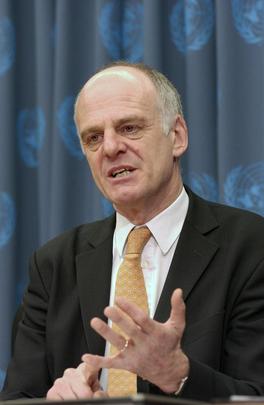 In previous years I have worked on HIV and influenza pandemics: I have seen how rapidly contagion can spread. Recently, I have asked myself whether the world is near the tipping point for ending hunger. Has the momentum reached a critical mass? Is it reasonable to contemplate a world free of malnutrition? I believe it is.

In recent years many leaders have made commitments to tackle food insecurity and malnutrition. The intensity of focus and action has mushroomed in 2013 and in June it is higher than ever before.

The Food and Agriculture Organisation of the United Nations’ (FAO) annual flagship publication, the “State of Food and Agriculture: Sustainable Food Systems for Better Nutrition”, was the first edition since 1947 to focus on maximising the nutritional impact of agriculture and food systems. It follows the decision by the countries that govern FAO to make the eradication of hunger and malnutrition its number one strategic objective.

World Environment Day focused on the issue of food loss and waste, with the U.N. Environment Programme and FAO teaming up in a campaign titled “Think. Eat. Save. Reduce your foodprint.” Given that one-third of all food produced is discarded between harvest and your home, minimising food waste is essential. Pope Francis said it best when he said that “wasting food is like stealing from the table of the poor.”

The renowned medical journal The Lancet’s latest edition on nutrition includes evidence that malnutrition is responsible for almost half of all child deaths – a staggering three million lives per year. Of these, 800,000 babies died because they were born too small or too soon, usually because their mother was malnourished. It estimated that scaling up 10 interventions could save one million children’s lives and prevent chronic malnutrition in 33 million more. The burden of scientific proof is now overwhelming.

Just ahead of the G8 Summit, the governments of the United Kingdom and Brazil, together with the Children’s Investment Fund Foundation, co-hosted an international summit on “Nutrition for Growth.” Several hundred high-level participants committed to reducing the burden of malnutrition on individuals, societies and the economy.

"The Zero Hunger Challenge is not a plan or a programme. It is a compass..." -- Dr. David Nabarro

Tens of thousands of people gathered in Hyde Park in support of a campaign called “Enough Food IF” and there were major events in 15 other cities throughout the world. Civil society groups from more than 30 countries then met in Washington DC to discuss how to achieve better results. These are among the thousands of citizens throughout the world who will check that the promises are kept.

This whirlwind month is an example of the increasing momentum building towards an end to hunger.

As the deadline for the Millennium Development Goals nears, the international community is considering the post-2015 development agenda and sustainable development goals. Though negotiations are still underway, there is growing support among governments and other stakeholders for food security and good nutrition for all people to be one of the goals.

Forty countries from Africa, Asia and Latin America are at the front of the Scaling Up Nutrition Movement. They are supported by hundreds of partners from civil society, business and the development community, who are aligned behind national nutrition plans, designed and owned in-country. Results are already visible with many reducing the percentage of their children who are chronically undernourished.

Almost one year ago the U.N. Secretary-General Ban Ki-moon sensed the tipping point was near. He threw down the gauntlet at the U.N. Conference on Sustainable Development, known as Rio+20 by launching his Zero Hunger Challenge. In our world of plenty, he said, not a single person should go hungry.

Ban, who comes from the Republic of Korea, knows from personal experience the indignity of hunger. He has seen how people can overcome hunger by making food and nutrition security a top national priority, and making sure that all departments of government, as well as scientists, farmers, responsible businesses and civil society work together to make it happen.

The secretary-general’s vision is a world in which every man, woman and child enjoys their right to food, and where all food systems are sustainable. The Zero Hunger Challenge is not a plan or a programme. It is a compass, setting the direction for countries, organisations and individuals who choose their own paths towards zero.

Fifteen countries are moving forward in line with the Zero Hunger Challenge. Dozens of others have formed multi-party parliamentary groups in support of ending hunger. The 23 international organisations which make up the High Level Task Force on Global Food Security are supporting countries which take up the Challenge.

Through all of this, the Committee on World Food Security, the preeminent body for global governance of food, has come into its own. Made up of governments, civil society and the private sector, the Committee has developed Voluntary Guidelines on the Responsible Governance of Tenure of Land, Fisheries and Forests in the Context of National Food Security. It is working on principles for responsible agricultural investment, and on protracted food insecurity in countries in crisis.

These are the reasons I am optimistic that the world will soon reach a tipping point for ending hunger. Now is the time for promises that have been made translate into a steep decrease in the number – now 870 million – of people who are still hungry today. It will not be easy, and progress may not be linear, but we have an unprecedented opportunity to eliminate one of humanity’s most ancient scourges.

*Dr. David Nabarro is the Special Representative of the United Nations Secretary-General for Food Security and Nutrition.