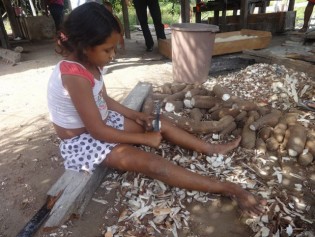 By David Nabarro
Author Malcolm Gladwell draws on the science of epidemiology in his book "The Tipping Point" to explain how ideas spread through a population, in the same way as an infectious disease can proceed from a few cases to a full-blown pandemic.

By Fabíola Ortiz
Providing school meals for 45 million children is a remarkable achievement for Brazil. But the programme faces specific difficulties, as well as the generic problems plaguing any national plan in this vast country of more than 192 million people.

By Fabiana Frayssinet
The Brazilian government is stepping up South-South aid, to strengthen the South American giant’s status as a donor country and its international clout. It now provides assistance to 65 countries, and its financial aid has grown threefold in the last seven years.

By Danilo Valladares
“We don’t want a repeat of welfare-oriented programmes, because they are unsustainable,” said Rony Palacios of the National Network for the Defence of Food Sovereignty in Guatemala, criticising President Otto Pérez Molina’s Zero Hunger plan.