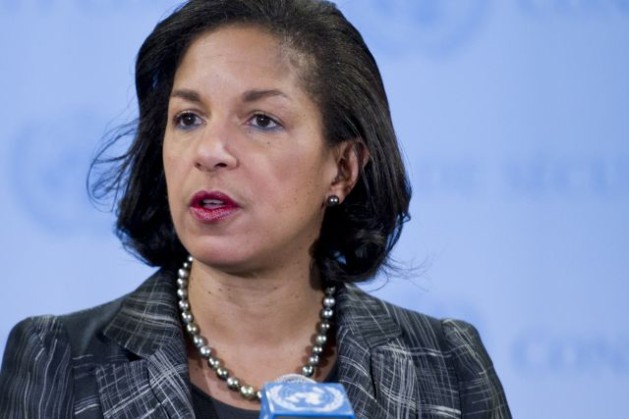 He also announced that another longtime aide on the National Security Council staff who began working with Obama when he was still a freshman senator from Illinois, Samantha Power, will replace Rice as Washington’s U.N. envoy, a cabinet position.

"Power and Rice are smart, tough, and experienced. But both are firmly in the interventionist consensus." -- Harvard University’s Stephen Walt

The moves, which had been anticipated but whose precise timing was uncertain, are considered unlikely to signal major changes in U.S. policy, despite the fact that both Power and Rice have been associated with the more-interventionist tendencies within the Democratic Party.

“I don’t think this change in personnel marks a turning point in policy,” said Charles Kupchan, a senior fellow at the Council on Foreign Relations.

“From the get-go, foreign policy under Obama has been run from the (White House) Oval Office, and Obama’s brain trust has included primarily a small inner circle of folks that cut their teeth on the (2008 presidential) campaign. Susan Rice and Samantha Power have been part of that inner circle all along.”

“I see the move as a confident second-term president promoting people who will be more visible,” noted Heather Hurlburt, director of the National Security Network (NSN), a think tank considered close to the administration.

“Donilon’s great strength was his managerial skill and willingness to work behind the scenes. Rice’s public persona is one of her great strengths, and I’m sure the White House will use it.

A Razor Tongue, But "Charming" Nonetheless

At closed door meetings of the U.N. Security Council, the outspoken Rice was known to throw diplomatic protocol to the winds.

With her harsh comments and her unyielding negotiating tactics, Rice was never known to pull her political punches.

And Rice’s idioms baffled and upset some of the diplomats who were unable or unwilling to respond to her in the same jargon.

An Asian diplomat told IPS that at one closed-door meeting Rice dismissed one of the proposals as “total crap” and shocked some of the diplomats when she described another line of thinking as “bullshit".

At a personal level, he said, she was outrageously charming with a strong sense of humor and genuine affection.

“She had the capacity to tell you to ‘go to hell’ in a way that you will enjoy the ride,” said the Asian envoy who spent two years at the negotiating table with Rice.

Russian ambassador Vitaly Churkin was one of the few diplomats who was willing to match his wits against hers.

He responded angrily when Rice described as “bogus” Russia’s call to investigate civilian deaths in Libya caused by NATO bombings.

Conscious of Rice’s stint at Stanford University, Churkin told reporters: "Really this Stanford dictionary of expletives must be replaced by something more Victorian, because certainly this is not the language in which we intend to discuss matters with our partners in the Security Council."

Asked for his reaction following the Obama administration’s decision to withdraw Rice’s nomination as a secretary of state, Churkin told a TV interviewer last year: “The only thing I can say is that, if it means that Ambassador Rice is going to spend four more years in the United Nations, I will have to ask for double pay.”

A Latin American ambassador, who was seated close to the Chinese envoy at the Security Council chamber, told IPS that when Rice took some passing shots at China, “I noticed, for the first time, the Chinese ambassador looked agitated and his hands were shivering.”

In a statement released Wednesday, U.N. Secretary-General Ban Ki-moon singled out the dynamic role that Rice has played as the U.S. Permanent Representative to the United Nations since 2009.

“She has been a strong voice in the Security Council and an effective advocate on the full range of issues before the United Nations, from peace and security to human rights and development.’

Ban said he has benefitted greatly from her support and counsel.

He welcomed the firm commitment she so often demonstrated, in particular to African issues and on matters such as women’s empowerment.

“The United Nations as a whole has benefitted from her commitment to strong U.S. engagement with the organisation as the world’s principal forum for addressing key global challenges through cooperative and multilateral solutions,” he said.

“Power will be one of the people most knowledgeable about the UN that the U.S. has ever sent to represent us there, and that’s quite a statement about the U.S. commitment to that organisation’s potential,” she added, noting that Power’s knowledge is based on her years as a journalist and author covering the world body and some of its most controversial and difficult missions.

Late last year, Rice was considered Obama’s first choice to replace Hillary Clinton as secretary of state but withdrew from consideration after Republicans accused her of deliberately misleading the public about events surrounding the killing of the U.S. ambassador to Libya and three other U.S. personnel in last September in Benghazi.

Unlike Rice, Donilon, or Power, the first national security, Gen. James Jones (ret.), was never close to Obama and tended to see his work primarily as coordinating the advice of the other top national-security officials, notably the secretaries of defence and state and the director of national intelligence.

After two years, Donilon, Jones’ deputy and a Democratic political heavyweight, replaced him, moving quickly to concentrate foreign policy making in the White House and greatly increasing the size and workload of the NSC staff.

A top aide to Secretary of State Warren Christopher during President Bill Clinton’s first term, Donilon is given credit for a number of major strategic initiatives – most recently, promoting this week’s informal and potentially historic California summit between Obama and Chinese President Xi Jinping.

Indeed, one prominent NSC historian, David Rothkopf, wrote on foreignpolicy.com Wednesday that his “greatest contribution was his strategic mindset” that led to “…a restoration of balance to the U.S. national security agenda, a move away from the conflict-dominated view of the years right after 9/11 to one that is more global and has room to consider opportunities, new alliances, and new challenges more effectively.”

If Donilon was more inclined to the more non-interventionist stance of his mentor, Christopher, Rice is best seen as the protégée of Clinton’s second-term and more-interventionist Madeleine Albright whom she has known since childhood and served as assistant secretary of state for African Affairs.

Haunted by Washington’s refusal to act during the 1994 Rwandan genocide (when she worked on Clinton’s NSC), Rice, as well as Power, has been a leading exponent of the Responsibility to Protect (R2P), the doctrine that the international community has a responsibility to intervene in order to prevent genocide or mass atrocities if the otherwise sovereign state is unwilling or unable to do so.

“Power and Rice are smart, tough, and experienced. But both are firmly in the interventionist consensus that has guided U.S. foreign policy for many years, and neither is going to go outside the mainstream on any controversial issues,” Stephen Walt, a prominent international-relations professor at Harvard University’s Kennedy School of Government, told IPS in an email message.
Citing R2P, both Rice and Power reportedly played an important role in persuading Obama to intervene in the civil war in Libya, although, significantly, Rice sided with Donilon against other cabinet officials and CIA director Gen. David Petraeus who recommended a limited military intervention on behalf of rebels in the Syrian civil war late last year, according to numerous published reports.

“Everyone knows there have been disagreements on the team, and the person who resolves them is Barack Hussein Obama. People debate this as if Obama had no opinions on these issues,” noted Hurlburt. “But second-term presidents evolve and get more active (in foreign policy). If that happens, that will be primarily because Obama wants to go there.”

One area in which there could be a major difference is managerial. While concentrating power in the White House, Donilon, a high-priced lawyer outside government, consistently ensured that relevant cabinet secretaries were continually consulted and their policy recommendations presented to the president.

Known for driving his staff particularly hard and making little secret of his unhappiness if in his judgement they failed to perform, he also maintained a deliberately low profile and a carefully calculated demeanour.

While a loyal team player – and the graceful manner in which she withdrew from consideration as secretary of state gained wide admiration and no doubt clinched her claim to her new post – Rice is flamboyant and impulsive by comparison, particularly in her preference for blunt, if colourful — sometimes even scatological — language, a habit that many of her U.N. colleagues found off-putting or difficult to get used to (see sidebar).

“She can be quite charming and likeable, and she is awfully smart,” CFR’s emeritus president Leslie Gelb wrote in the Daily Beast Wednesday. “And unlike Donilon, she often rushes to judgment, and then digs in. She’ll have to learn to count to 100, I mean 1000, before making up her mind, and meantime, listen to different views carefully.” He also noted that “she has a temper that needs tempering.”

Indeed, some sources who asked not to be named predicted that she faced major challenges in working out collegial relationships with Pentagon chief Chuck Hagel and Secretary of State John Kerry – both of whom are also new to their jobs and would be expected to make life difficult for her if they felt she was hogging the media spotlight or failing to consult adequately with their departments in formulating options for the president.

“No shrinking violet is she,” one insider told IPS.

In that respect, according to Rothkopf, she could be greatly aided by Donilon’s former deputy and Obama’s new chief of staff, Denis McDonough, a foreign policy wonk in his own right and one of the very few people who are considered as personally close to Obama as Rice herself.