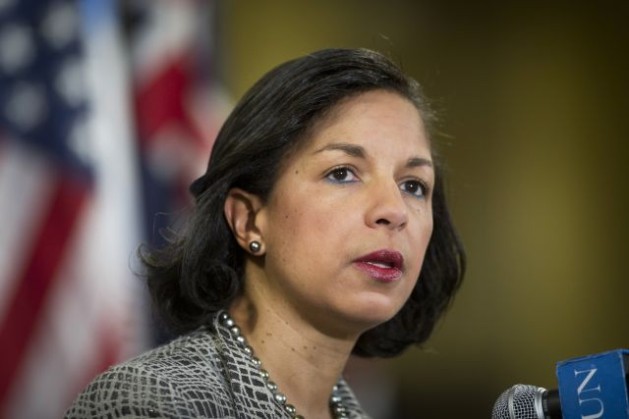 UNITED NATIONS/WASHINGTON, Mar 8 2013 (IPS) - North Korea, which has survived three rounds of diplomatic and economic sanctions since its first nuclear test in 2006, reacted with predictable fury, threatening to nuke the United States, in retaliation for a Security Council resolution imposing new sanctions against Pyongyang.

The White House dismissed the threat. “I can tell you that the United States is fully capable of defending against any North Korean ballistic missile attack,” said White House spokesman Jay Carney Thursday.

If the U.S. and the other nuclear powers finally got serious about a nuclear weapons-free world, this sort of thing would no longer happen.

After the unanimous 15-0 Security Council Thursday, U.N. Ambassador Susan Rice assured delegates the new punitive measures, including an effort to counter the abuse of diplomatic privileges to advance North Korea’s nuclear and ballistic missile activities, will “bite – and bite hard.”

“It will now be much harder for such diplomats to procure technology or divert funds to the nuclear programme without being detected and expelled,” she told the Security Council.

The resolution, which was jointly drafted by the United States and North Korea’s political ally China in reaction to Pyongyang’s Feb. 12 underground nuclear test, also bans the transfer to and from North Korea of specific ballistic missile, nuclear, and chemical weapons-related technology.

The resolution empowers countries to inspect suspicious North Korean cargo traversing their national territory as part of the enforcement regime. It also freezes financial transactions that could help Pyongyang’s nuclear or weapons-related programmes.

Independent analysts said it was difficult to predict the impact of the new sanctions – the most far-reaching against Pyongyang to date – on North Korea’s behaviour.

If North Korea is as irrational as characterised then we should be concerned and find a way out of the current conundrum fast.

The idea that they only become a nuclear threat when they have missile capacity does not give me much assurance. A tugboat in the harbour of any city with a financial centre could do enormous damage.

Their nuclear tests highlight the urgency of making the universal elimination of nuclear weapons an international priority.

The possession and threat of use of nuclear weapons by any country only undermines necessary efforts to stem proliferation and move toward elimination.

How many tests have the North Koreans done? How many have the five permanent members of the United Nations Security Council done? Less than the fingers on one hand compared to around two thousand.

We need one standard for all - nuclear weapons are unworthy of civilisation and no country should be brandishing them.

Direct talks, multilateral talks, talks at all levels should be pursued and North Korea assured that it will not be provocatively attacked by the United States or our allies. This is not rewarding bad conduct but pursuing a course of conduct designed to change it.

A cease fire is not a sufficient ending of the Korean War. The 1953 Armistice Agreement needs updating and a comprehensive peace agreement is timely.

It is time for a Northeast Asia Nuclear Weapons Free Zone to extend this rational approach that has succeeded in the South Pacific, Central Asia, Africa, South Asia, and Latin America, including thereby over 112 countries in nuclear weapons free zones.

A confidence building step would be for the U.S. to declare a no first use of nuclear weapons policy and take that option off the table now."

“If you look at these sanctions in addressing banking in a more serious way and also inspections of planes and ships going through national territory, there’s a potential for these to actually impinge far more than previous sanctions,” said Alan Romberg, East Asia programme director at the Stimson Center, a Washington think tank. “But whether they will do so will depend on their implementation.

“One of the things people are concerned about is that, in the past, China has not been as rigorous in implementing sanctions as might have been hoped. We’ll have to see what it will do in this case,” according to Romberg, who previously served as senior Northeast Asia official in the U.S. State Department.

Peter Weiss, president of the Lawyers Committee on Nuclear Policy, told IPS that since North Korea’s idea of diplomacy is totally sui generis, predicting its reaction to Thursday’s Security Council resolution “would be like predicting tomorrow’s weather when all the meteorological data have become unavailable”.

The fact that China co-authored the resolution with the United States, would lead one to believe it may have some effect, he added.

“But the only thing I would take a bet on is that if the U.S. and the other nuclear powers finally got serious about a nuclear weapons-free world, this sort of thing would no longer happen,” said Weiss, who is also co-president of the International Association of Lawyers Against Nuclear Arms.

Asked whether the repeated patterns of provocations/sanctions would work if the sanctions are not fully implemented, Rice told reporters: “The choice and the answer to your question lies of course with the decisions that the North Korean leadership make.”

“We have been very clear as an international community and as a Security Council that we are united in demanding that North Korea comply with its obligations or face increased pressure and isolation,” she added.

For his part, U.N. Secretary-General Ban Ki-moon, a former South Korean foreign minister, praised the Council’s actions, insisting that it “sent an unequivocal message to (North Korea) that the international community will not tolerate its pursuit of nuclear weapons.”

The latest round of sanctions came only three weeks after North Korea’s nuclear test, the first conducted under the auspices of the country’s young new leader, Kim Jong-un. Pyongyang’s two previous nuclear tests – in 2006 and 2009 – also provoked U.N. sanctions whose implementation, however, has been uneven.

They include an arms embargo on North Korea and a prohibition on trade with it involving nuclear or missile technology, as well as a ban on the export of luxury goods to the country. The new resolution adds to these measures and closes a loophole that until now had permitted countries to decide what constitutes a “luxury good”.

The new resolution blacklists specific goods, including yachts, racing cars, high-priced automobiles and certain kinds of jewelry, among other items.

While most officials both at the U.N. and in Washington consider North Korea’s new threats as bravado, they are concerned about a sharp rise in tensions on the Korean Peninsula itself.

The U.S. and South Korean militaries are currently conducting joint manoeuvres that are scheduled to intensify over the next week. As it became clear over the past several days that Washington and Beijing had agreed on a new sanctions resolution, Pyongyang’s rhetoric became increasingly bellicose.

It called the impending sanctions an “act of war” and declared that the armistice that halted the Korean War 1953 would expire Mar. 11.

At the same time, Seoul’s newly elected president, Park Geun-hye, who pledged during her campaign to pursue a somewhat softer policy toward Pyongyang than her hard-line predecessor, took office only two weeks ago, and analysts are concerned that the North’s leadership may be tempted to take some form of military action to test her intentions.

But the major question hovering over the impact of the new U.N. sanctions is how vigorously China, on which Pyongyang relies almost exclusively for its fuel and other vital supplies, will enforce them.

The fact that it took only three weeks for China to agree on co-sponsoring the sanctions resolution – a much shorter period than with previous round of sanctions – was taken as a sign that Beijing is increasingly losing patience with the Pyongyang regime.

The language and tone were also tougher, according to Romberg, who said it “reflected great frustration with the way North Korea is proceeding”.

“The strategic concerns that lie behind China’s North Korea policy have not changed – that is, to avoid either chaos in the North or an outcome that would mean unification under South Korean leadership allied to the United States,” he told IPS.

“But as we are seeing in many Chinese commentaries on the subject, quite a number of people are questioning whether continuing Chinese support for North Korea is in the PRC’s best interest.”

Indeed, Mao Xinyu, the only grandson of China’s revolutionary leader, Mao Zedong, and a major general in the People’s Liberation Army, called this week on Pyongyang to abandon its nuclear ambitions.

“The United States will not engage in talks for the sake of talks,” he said. “Authentic and credible negotiations …require a serious, meaningful change in North Korea’s priorities demonstrating that Pyongyang is prepared to meet its commitments and obligations to achieve the core goal of the September 2005 Joint Statement: the verifiable denuclearization of the Korean Peninsula in a peaceful manner.”