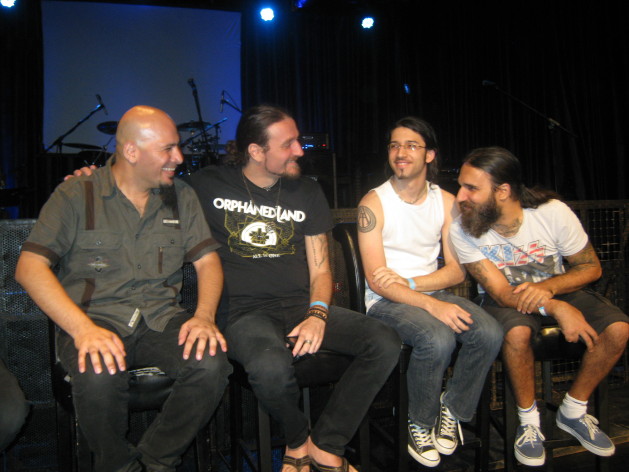 Abed Khatout (left) from the Arab-Israeli band Khalas and Koby Farhi (second from left) from the Jewish band Orphaned Land with musicians in Tel Aviv ahead of joint concerts in Europe. Credit: Pierre Klochendler/IPS.

TEL AVIV, Jul 28 2013 (IPS) - Two heavy metal bands, the Israeli-Arab Khalas (‘enough,’ in Arabic) and the Orphaned Land, a Jewish band, performed simultaneously this week under the roof of Club Hangar 13 in the refurbished port of Tel Aviv. The bands are slated to play together this fall in a series of 18 gigs across Europe.

Though the artistic cooperation is hailed as a major breakthrough – it’s quite rare that a Jewish band plays along with an Arab band even if it is an Israel-Arab one – both bands would rather play their heavy metal Rock’n’Roll with a musical twist than play the strings of their conflicting identity.

Abed Khathout, bass guitar player and leader of the Israeli-Arab band, is from Acre in northern Israel. He made sure to downplay expectations during a rehearsal. “We’re metal brothers before anything else. Music is what connects us.”

The ‘disconnect’ is actually with Khalas’s Palestinian brethren from the occupied territories who argue that musical ventures portrayed as coexistence projects condone the Israeli occupation of the West Bank and East Jerusalem.

“Cultivating brotherhood, sharing the stage shows that rock music is above politics,” stressed Koby Farhi, leader of the Jewish band, and lead singer.

Orphaned Land music is a mix of New Age beat. Their lyrics conjure up prophetic peace amongst religions.

“We were supposed to have a gig in November in Egypt. One week before the tour, we got cancelled. Well, we have Israeli passports,” said Khathout.

Their beat is imbued in the hafla (party) Cairo style. During their show, they suitably sang Alf Leila wa Leila, (A Thousand Nights), a hit from the legendary Egyptian singer Umm Kulthum.

Orphaned Land has performed in Turkey and boasts it is “popular in the Arab world.” The confusion between Turkish and Arab identities is common in Israel due to the Islamic roots of both Turks and Arabs.

But Orphaned Land is persona non grata in the Arab world. Their undesirable status stems from their Jewish origin.

The musical score played by the two bands has one underlying refrain – music is without borders. Yet, as borders are a core issue of the Palestinian-Israeli conflict, politics takes the lead, and in the final analysis, where you live is who you are.

One in five Israelis is an Arab of Palestinian descent. Indeed, most regard themselves as Palestinians, or as “Israeli Palestinians”. Most Israeli Jews define them as “Israeli Arabs”. Right-wing Israel Jews see them as a ‘fifth column’.

Most Palestinians call them the “1948 Arabs” for remaining in the nascent Jewish state during the troubled times.

When Israel fought its war of independence in 1948-9, hundreds of thousands of Palestinians were forced to become refugees. Many amongst those who remained inside Israel were displaced as “internal refugees”.

For the Palestinians, Israel’s war of independence is the Great Catastrophe, or Naqba.

Farhi made every possible effort to emphasise the spirit of togetherness. “Tonight is the second time we play together – Orphaned Land and Khalas, as Israelis and Arabs,” he said.

But of course both bands are Israeli. The fact is many Israeli Jews, for whom being Jewish and Israeli is almost the same thing, almost unconsciously refer to their Arab compatriots as just Arabs.

And it seemed to suit the Arab band not to be branded as Israeli. It’s not easy to live as part of a minority caught in a war between their people (the Palestinians) and their country (Israel).

“We hate it when everyone expects us to sing about the occupation just for being Palestinians,” said Khathout.

Palestinians from the West Bank and East Jerusalem might disagree. Since the second Intifadah uprising (2000-2005), they’ve been maintaining a cultural boycott of Israel in protest against the occupation.

The ‘disconnect’ is actually with Khalas’s Palestinian brethren from the occupied territories who argue that musical ventures portrayed as coexistence projects condone the Israeli occupation of the West Bank and East Jerusalem.

In any case, the strict closures enforced in the West Bank by way of checkpoints, special roads reserved for the settler population, fences and separation walls, don’t help cultural exchanges.

Restriction of movement is being eased during the Muslim holy month Ramadan. The elderly faithful from the West Bank are temporarily allowed to pray at the Haram es-Sharif, Islam’s third holiest shrine, which stands inside Jerusalem’s walled Old City.

The easing of the closure is probably because there are peace talks in the offing.

Apart from the core issue of borders, national identity is a major stumbling block. Israeli Prime Minister Benjamin Netanyahu insists that Israel be recognised by the Palestinians as a “Jewish state”. Palestinian Authority President Mahmoud Abbas is opposed to agreeing to such definition of Israel for it would ignore Israel’s large Palestinian minority.

In Gaza, ever since the Islamic Resistance Movement Hamas’s takeover (2007) and the ensuing Israeli siege, artists such as Arab Idol Mohammad Assaf are barred from entering Israel.

The European Union recently announced that, effective 2014, its 28 member-states would be required to differentiate between Israel proper and Israeli settlements in the occupied West Bank and East Jerusalem in all cooperation and funding agreements.

For most Israeli Jews, the 200,000 inhabitants who live in East Jerusalem’s Jewish neighbourhood aren’t settlers; they’re “Jerusalem residents” and, of course, Israelis.

The 400,000 settlers who live in the West Bank define themselves simply as Israelis.

For the EU and many countries who don’t recognise Israel’s legitimacy in the Occupied Palestinian Territories, Israelis who live there define their identity by imposition rather than by recognition.

“I’m strongly against boycotts,” declared Farhi. “The purpose of art is harmony and coexistence precisely in places of disharmony.”

Orphaned Land and Khalas have a modest dream – “to share a bus together” during their grand tour of Europe.