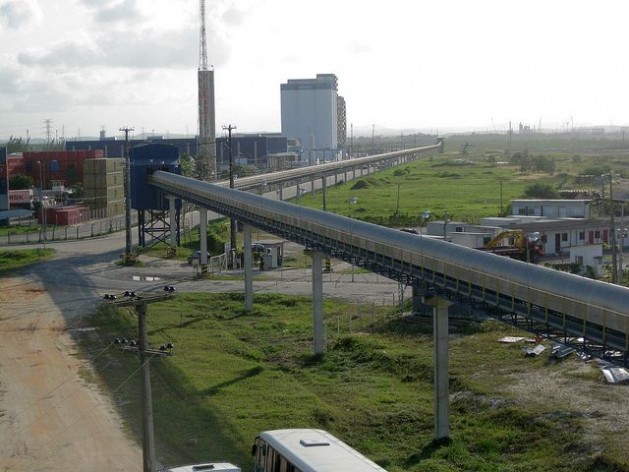 Brazil still looks almost exclusively to the Atlantic - where this grain pipeline operates in the Suape Port complex - turning its back on the Pacific. Credit: Mario Osava/IPS

Mercosur (Southern Common Market), made up of Argentina, Brazil, Uruguay and Venezuela – along with Paraguay, which has been suspended since President Fernando Lugo was ousted in June 2012 – is “a closed bloc, where the size of the country is absolutely decisive.”

Brazil has consistently attempted to impose its rules on the rest of the members, which has stood in the way of agreements, said Amayo, who specialises in economic history and Latin American international studies.

The emergence of an association of four important regional economies – the Pacific Alliance was launched in June 2012 – with a strategic geopolitical location on the Pacific Ocean establishes “a balance of power in South America and Latin America, which favours horizontal negotiations by giving a sense of reality” to Brazil and Mercosur, he said.

This could foment closer ties between the two blocs, in conditions of equality, with neither “unelected leaders nor charismatic informal leaders,” said Amayo. But Mercosur´s current problems make that unlikely.

Retired Brazilian ambassador José Botafogo Gonçalves said Brazil would have to “modify its vision of regional integration.” But, he said, that will not happen under the government of Dilma Rousseff, and “dynamic opportunities” offered by the countries of the Pacific, like Peru and Colombia, whose economies are now growing much faster than Brazil´s, will be missed.

Mercosur served the needs of Brazil “in the historical context” of the 1980s and 1990s, when the import substitution model was being abandoned, the country faced a severe financial crisis, and it was forced to overcome the isolation of its internal market.

Brazil´s opening up of trade made sense. It began with Argentina in 1988 and expanded to Paraguay and Uruguay when the bloc was founded in 1991, “an important step for Brazilian industry and agriculture, which became more competitive,” said Botafogo Gonçalves, vice president emeritus of the Brazilian Centre on International Relations (CEBRI).

But Mercosur “no longer responds to Brazil´s needs” in the current changing global economic situation, he said. Its industry has lost competitiveness and the bloc´s market “is not enough to help it recover,” he said.

Industry now needs to be integrated in global production chains, without insisting that “100 percent of the inputs must be national,” because competitiveness of exports will not be achieved that way, the ambassador said. For example, Mexico, by opening itself up to the maquila – for export assembly plants – in the past few decades, chose a path that today is bearing fruit, he said.

In Botafogo Gonçalves’ view, “there is still space for a broad, pragmatic accord” that would promote production chains that include countries of the Pacific Alliance, boosting the efficiency of Brazilian industry.

What is needed is not just an agreement on reducing tariffs, which have scant importance today because all duties have been drastically reduced, but “a real policy on integration, comprising regulations, energy, investment, infrastructure, intellectual property and communication,” he said.

But the diplomat said he did not see “brilliant prospects” in that area, because of “the irritated reactions” he has observed in the government, which prefers to seek ties with Bolivia and Ecuador, rather than with more promising economies like Peru and Colombia.

The biggest problem in Mercosur, which is still essential for Brazil´s foreign trade despite the sharp drop in exports to Argentina, is that these two large partners abandoned their integration and free trade policies over the last decade, he said.

Argentina did so because of its financial difficulties, not because of opposition to its giant neighbour. But in Brazil´s case, both former president Luiz Inácio Lula da Silva (2003-2011) and Rousseff turned their back on regional integration in practice, while continuing to support it rhetorically, Botafogo Gonçalves criticised.

Amayo´s concern, on the other hand, focuses on Brazil´s attitude as an emerging power towards small countries, which it grants unequal treatment in negotiations. He mentioned the example of Paraguay and Uruguay, in Mercosur.

He also said the expansion of Brazil´s multinational companies, backed up by abundant credit from this country´s state development bank, has drawn negative reactions.
The Pacific Alliance was not created with the intention of “dividing” the region, but to address the interests of its members and their long history of relations across the Pacific region, “and not just China and Japan,” Amayo said. “No one ever asked whether Mercosur divided Latin America,” he added.

Little attention is paid in Brazil to the history and reality of the countries of the Pacific region, in the country´s diplomacy and in research institutions, which rarely approve financial support for studies about the other side of the continent, he lamented.

The new bloc got off to a dynamic start with Costa Rica and Panama asking to join, and many others requesting observer status, which Uruguay, for instance, has already been granted.

Brazil should waste no time in understanding that strategic position “matters more than size,” Amayo said. The Alliance is not only in the Pacific region, but is “bi-oceanic,” with privileged access to the fastest-growing area in the global economy – the Pacific rim – as well as to the Atlantic, he noted.