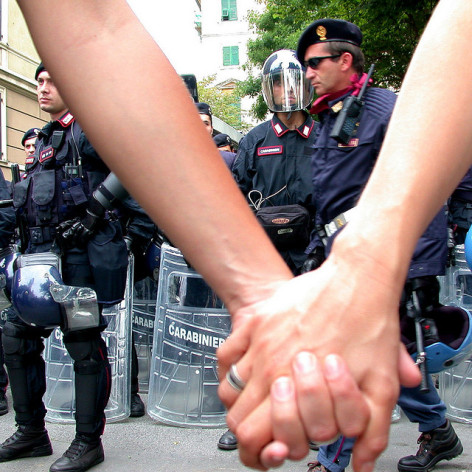 The 2001 demonstrations against the G8 Summit in Genoa, Italy. Groups of violent protesters, the so-called Black Block, had been looting the streets of Genoa. Ten demonstrators have been convicted for conspiracy to cause destruction. However, justice for the killing of 23-year-old Carlo Giuliani has been slow. Credit: Han Soete/CC By 2.0

ROME, Jul 23 2013 (IPS) - “It was midnight and I was sleeping; I woke up to the noise of the police breaking down the entrance door of the school,” says Italian journalist Lorenzo Guadagnucci. “They came in running and screaming. The bashing was immediate, with no chance of mediation.”

That was on Jul. 21, 2001. Guadagnucci, journalist with Resto del Carlino, a local newspaper based in Bologna in the north, had decided to go to Genoa that morning to witness the demonstrations against the G8 Summit.

“I saw them beating up everyone they encountered on their way before they came to me. Two policemen vented all their anger on me with their truncheon. Then a third came and hit me on the back.”

The day before, groups of violent protesters, the so-called Black Block, had been looting the streets of Genoa. The police had charged into one demonstration that was authorised, and 23-year-old Carlo Giuliani was shot dead by a carabiniere.

"Cold analysis suggests that the same conditions are still in place, and it could happen again.” -- Riccardo Noury, communications director of Amnesty International Italy

Ten demonstrators have been convicted for conspiracy to cause destruction, a law rarely used since the fascist period of the 1930s and 1940s. The protesters were given sentences of six to 14 years in jail.

Of the 25 police officers sentenced for the school raid and seven policemen and doctors convicted for the violence in the local barracks at Bolzaneto, no one will go to prison.

Heads of the police where banned from public office for five years. “From a judicial point of view, it is an important result,” said Guadagnucci. “But the paradox is that this outcome is completely useless. In the face of these sentences, the passivity of the parliament and of the government and the president the clear message is ‘we don’t care.’”

“Our request for the institution of an independent inquiry has been simply ignored,” Riccardo Noury, communications director of Amnesty International Italy told IPS. “And therefore we still have no answer to the question why all of this happened in Genoa.”

“The worst moment came after the bashing,” Guadagnucci told IPS. “They kept us inside the school for two hours: no press, no MPs, no one was allowed to enter. I remember people crying, screaming, bleeding, a girl having an epileptic attack.

“And the police kept saying that nobody knew they were there and they could do with us whatever they wanted. When you hear such things you really think they will kill you, and that is a trauma you cannot overcome, you simply cannot.”

All 93 people who were inside the school, of which 78 needed medical care, were immediately arrested for aggressive resistance to arrest, conspiracy to cause destruction, and illegal carrying of weapons after two Molotov bombs were allegedly found inside the school.

All charges against them were finally dropped in 2004 when the judges concluded that the Molotovs were brought into the school by the police to justify the raid.

That night Guadagnucci was “lucky enough” to be kept in hospital due to the risk of internal bleeding. The ones who did not suffer serious injuries were brought to the Bolzaneto barracks, where the second part of the nightmare began.

With no means of contacting their families or a lawyer, the witnesses later said girls were threatened with rape, people were forced to stand with their heads against the wall for hours, some were forced to bark like dogs, others were denied use of a toilet, and almost everyone was beaten up.

But Italy, despite ratification of the United Nations convention against torture in 1988, does not have a law against torture. “If we had it before Genoa, we could have prevented something, because the presence of a crime in the penal code works as a deterrent,” said Noury.

“We already have billions of laws in Italy and other tools to compensate for this lack,” Matteo Bianchi from Coisp (a police trade union) told IPS. But Noury is not convinced that is good enough.

Giuliani’s father is still seeking answers: “We were forced to start a civil lawsuit as a last possibility to evaluate things as they really happened, and not based on the imagination of some expert witness,” he told IPS.

The trial for his son’s death was dismissed for legitimate self-defence for the police, based on the fact that the carabiniere shot in the air but the bullet hit a stone, deviating its trajectory. “It is the most absurd and shameful thing they could have made up,” said Giuliani.

There are other reasons to open a new trial, he told IPS. “There are two pictures that prove that after the shot, when Carlo was lying surrounded by the police, but still alive, one of them hit him on his forehead with a stone. Right after, a video shows the deputy commissioner running after a demonstrator screaming ‘you killed him with your stone’. That was a sordid attempt at throwing facts off track.”

“Common sense might tell us that this was a unique event,” said Noury. “But cold analysis suggests that the same conditions are still in place, and it could happen again.”