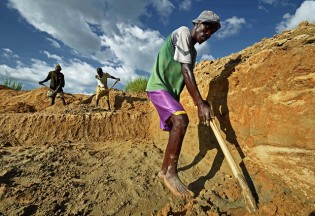 By Jomo Kwame Sundaram
Between 2010 and 2012, 868 million people worldwide were deemed hungry by a conservative definition. This figure represents only a small fraction of the world’s population whose health and lives are blighted by malnutrition.

By Jim Lobe
In addition to the serious health problems it causes, child malnutrition is costing the global economy tens of billions of dollars a year by depriving its victims of the ability to learn basic skills, according to a new report released Tuesday by Save the Children (STC).

By Carey L. Biron
On the eve of the Group of Eight (G8) summit near Washington, President Barack Obama on Friday unveiled a major new initiative aimed at shoring up food security and combating global hunger.
ADVERTISEMENT ADVERTISEMENT