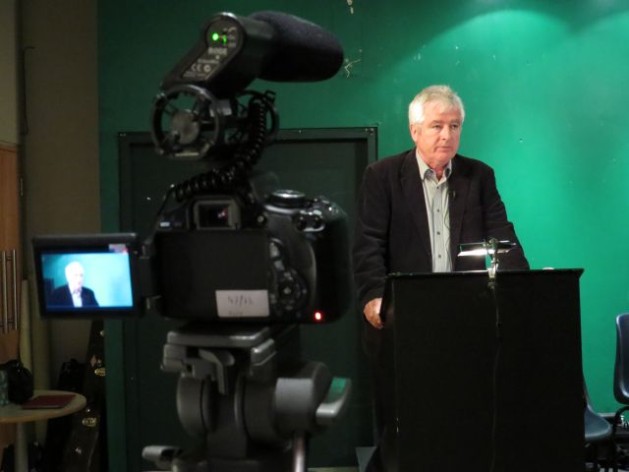 Frank Connolly, head of communications for Ireland's SIPTU, speaks to participants and is recorded by Dublic Community TV on Jun. 24, 2013, as part of the OURMedia conference. Credit: Jane Regan/IPS

DUBLIN, Ireland, Jul 1 2013 (IPS) - Communications scholars from around the world deplored the global financial crisis and called on their peers to take more active roles in the search for solutions at a recent four-day conference in Dublin, Ireland.

Over 1,400 professors and researchers from the International Association for Media and Communications Research (IAMCR) spoke, listened, lamented and argued at its Jun. 25-29 annual conference, this year centred on the theme “Crises, ‘Creative Destruction’ and the Global Power and Communication Orders.”

Some of the IAMCR professors gathered in Dublin two days before the conference for two days of workshops on issues like “social media and crises” and “media power, activism and technology".

Meeting under the umbrella of OURMedia, a network media scholars, activists and artists working with social movement and community media, and hosted by Dublin Community TV, participants shared successes and failures, analysed “best practices” and also learned about Dublin community and progressive media.

Bu Wei, from the Chinese Academy of Social Sciences, presented a look at media produced by migrant workers in China. She wondered if, rather than calling them “community media", the term “action media” might be more appropriate, since the media projects help workers “initiate, organise and preserve collective actions".

Griffith University Professor Susan Forde, who helped organise the meetings, called on scholars and activists to continue collaborating in order to better understand and utilise the new communication tools, like Facebook and Twitter.

“The connection between academic research and the work that is being dong in community media is vital,” said Forde. “As academic researchers we must be useful to the people who are working on the ground.”

In addition to visiting the studios of DCTV, participants went to the headquarters of the Services, Industrial, Professional & Technical Union, located at the site of the old Liberty Hall which served as the headquarters for the striking or locked out workers and their families during the infamous, five-month 1913 lockout.

Investigative journalist Frank Connolly, head of communications for the union and editor of their monthly newspaper, Liberty, compared the 1913 struggle, which pitted 20,000 workers against bosses, to conditions in Ireland at present.

“Ordinary people are being devastated through austerity,” Connolly told the visitors.

Union newspapers played a crucial role in the lockout, he said. The SIPTU’s paper has a circulation of 40,000, Connolly noted, but that is not sufficient.

“There’s very little of what is called ‘alternative’ and union media” in Ireland, he said. “There is a need for progressive media.”

“I proposed the theme,” DCU Professor Paschal Preston, head of the organising committee, told IPS. “I chose it to get away from the media-centred and media-centric analyses… Scholars are too often ignoring the growing and glaring failures of democracy in the West.”

The Dublin conference attracted a record number of academic papers from over 80 countries. At the plenaries and in the panels, academics spoke about the challenges facing the media, communications scholars, and the planet as a whole.

Ireland’s President Michael B. Higgins opened the conference speaking Irish and then switching to English. The former head of Ireland’s Labour Party lamented the fact that media consumers get more and more “formulised, homogenised content” and criticised the concentration of media ownership at the global level by mostly U.S. corporations.

“We don’t even know which conglomerate owns which media,” Higgins told the audience.

Later in the week, scholars from Africa, Europe and the U.S. challenged the assembled academics – perhaps half of whom came from Europe and North America – to get out of the classroom and grapple with the crises facing the planet.

In a talk delivered via internet, University of Cape Town Professor Francis Nyamnjoh noted that the crisis scaring Western Europe is nothing new for those in Africa or Latin America.

“As a 50-year-old African I am used to life as a constant crisis,” he said.

Annabelle Sreberny, a professor at the School of Oriental and African Studies in London and a former president of IAMCR, said the world is facing “many crises… the academy is in crisis and indeed our democracies are in crisis.”

Speaking later to IPS, she warned of “the dark side of the internet”.

“I think that academics in this field, who have worked through a great period of ‘cyber-utopianism,’ need to take seriously the revelations and hypocrisy of our governments,” the professor said.

University of Oregon sociologist John Bellamy Foster was among several speakers on panels that discussed the environmental crisis. Editor of the New York-based Monthly Review and author of several books, Foster said the capitalist system “is falling apart” and urged academics to open their minds to alternatives.

In a talk on what she calls “mass personalised media” – Facebook, Twitter and other social media platforms – the professor and author from Hobart and William Smith Colleges urged scholars to think more critically. Explaining her theory of “communicative capitalism”, Dean explained how social media obfuscate class while intensifying individualism, and said they are not “free”.

“We pay with attention, and the cost is focus,” Dean told her audience.

The IAMCR was founded in 1957, with the blessing of UNESCO, and is both an academic and an advocacy organisation, but some in Dublin voiced criticisms. At several sessions, participants called on the association to take more proactive stances on the government spying scandals and other issues.

Stefania Milan, of Tilburg University in The Netherlands, was one of several who noted the growing influence of corporate funding on universities and the fact that in the U.S., full-time professors are being replaced by part-time teachers and by MOOCs (Massive Open Online Courses). Several studies peg the number of courses taught by adjuncts in the U.S. at about 70 percent, with Europe following close behind. Milan urged the IAMCR to speak out.

“We need to be an organisation that takes sides,” Milan said at a session called to examine IAMCR’s future.

At another forward-looking panel, this one called to “rethink” communication theory, scholars from Jamaica, China and India urged theorists to look beyond Western theory. Among the speakers was Pradip Thomas, from the University of Queensland, who said the global capitalist crisis “offers us an opportunity to deal with the underbelly: communication capitalism.”

Hopeton Dunn, director of the Caribbean Institute of Media and Communication (CARIMAC) at the University of the West Indies in Jamaica, told IPS he organised the discussion in order to look at the “conceptual and theoretical crisis” of the field.

“There is a major gap between what is happening in the poor countries and the analysis taking place that is informed by thinkers in the rich countries,” he said. “The Academy is not playing enough of a role in addressing the real needs of real people.”

Panels, book launch parties and even some of the music at the IAMCR were dominated by the “crisis” theme. A song by Irish singer Clara Sidine, who entertained one evening, was accompanied by images of Rolex watches, mansions and roulette wheels, followed by photos of foreclosed houses and boarded-up shops.

Sidine told the crowd that Ireland’s economic crisis had inspired her to write “What’s a Boy To Do?” about a month ago.

Last week, Ireland’s government announced the economy had slipped back into recession. Ireland’s official unemployment rate stands at about 14 percent, and the state has one of the highest debts compared to GDP in Europe, at 118 percent.

“Ireland has gone from being the neoliberal pin-up to ‘failed state’ or bankrupt state,” explained DCU’s Preston, whose area of specialisation is political economy. “The Irish people have been carrying huge burdens of debt, way beyond other countries.”

Preston’s own department has also felt the crunch. In the past four years, DCU’s School of Communications has shrunk from 25 to 20 full-time staff, he said, and everyone has had to accept 20-percent pay cuts.

Asked what might come out of the IAMCR conference, the professor said he hoped it would help create “a more engaged community of communications scholars.”

“We need to link media issues to the deeper and structural crises of democracies in our societies,” he said.