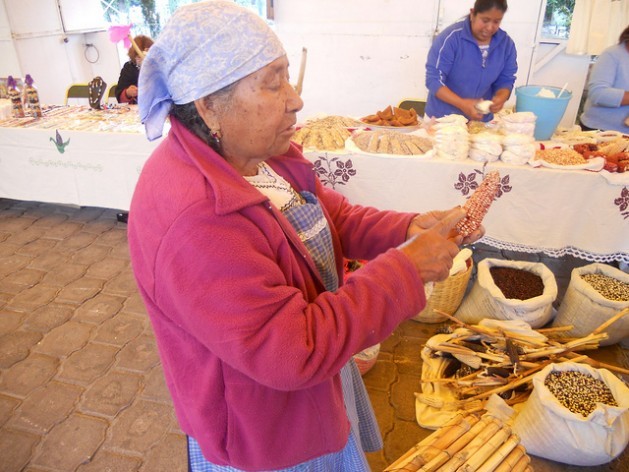 María Solís grows several different colours of native maize, not yet contaminated by the presence of GMOs. Credit: Emilio Godoy/IPS

MEXICO CITY, Jul 15 2013 (IPS) - Mexico lacks an effective system for monitoring genetically modified organisms, even though they have been regulated by law since the middle of last decade, experts say. In the case of maize, this situation has stood in the way of obtaining data that could help block commercial production, they say.

“The government monitoring should have discovered the risks, but they don’t dare acknowledge that GMOs have caused harm to health and the environment,” said Álvaro Salgado, a member of the Red en Defensa del Maíz (Network in Defence of Maize).

“That can justify the industry’s intentions,” Salgado said in an interview with IPS. “GM contamination (of conventional crops) is not accidental, it’s deliberate. There’s no need for all this monitoring – what should be done is just to block the entrance of GMOs.”

Large-scale commercial release of transgenic crops has not yet been authorised in Mexico.

But the Network says it has detected GMOs in field surveys carried out over the past decade in the northern state of Chihuahua and the southern states of Hidalgo, Veracruz and Oaxaca. Now the coalition of NGOs is focusing on analysing hybrid species to determine the specific source of contamination.

The ministries of agriculture, public health and the environment, as well as the National Institute of Ecology and Climate Change (INECC), are in charge of carrying out inspections to determine the presence of GM material, according to Mexico’s 2005 biosafety law on GMOs.

The law specifies that “pilot and experimental” planting must be done under controlled conditions in protected areas in order to prevent contamination, and that risk assessments must be carried out.

Particularly in the case of maize, it implements a special protective regime which prohibits the release of GMOs in certain areas, to protect the diversity of native species of maize and close wild relatives.

But the NGOs complain that the map that the protective regime is based on is incomplete, and they argue that it should actually cover nearly the entire country as the birthplace of different kinds of maize, due to the enormous number of varieties and their broad geographic distribution.

Experts and activists are also sceptical about the authorities’ oversight capacity and the reliability of the results they come up with.

“They aren’t reporting properly, in the monitoring,” Aleira Lara, coordinator of the sustainable agriculture and transgenics campaign of the Mexico branch of Greenpeace, told IPS.

Greenpeace Mexico is preparing a GMO inspection protocol in Chihuahua, where transgenic contamination was found in 2007. But it has been unable to carry out the inspections because of the high levels of insecurity in the area.

In September 2012, U.S. biotech giants Monsanto, Pioneer and Dow Agrosciences presented six applications for commercial planting of transgenic maize on more than two million hectares in the northwestern state of Sinaloa and the northeastern state of Tamaulipas.

The deadline expired in February without a response from the government, and the companies applied once again for permits.

In January, these companies and Syngenta filed 11 applications for pilot and experimental plots to grow transgenic corn on 622 hectares in the northern states of Chihuahua, Coahuila, Durango, Sinaloa and Baja California. And Monsanto has sought permission for an additional plantation in an unspecified area in the north of the country.
Since 2009, the Mexican government has issued 177 permits for experimental plots of transgenic maize covering an area of 2,664 hectares. The permits require monitoring of surrounding areas to control and prevent GMO contamination
Civil society organisations have asked the government to take an official stance on GMOs. But its response has been that the permits issued have been in line with the law on GMOs and that the decision on commercial production will be based on scientific criteria.

A 2012 INECC study on “Indicators for Monitoring the Effects of the Release of Genetically Modified Maize in the North of the Country” states that there is a lack of “baseline information on the state of communities of non-white maize in the areas of release”.

It also says the response to insecticides or different management practices associated with GMOs has not been measured in any species of non-white maize in the areas where transgenic crops have been grown.

Mexico, the birthplace of maize, has 59 landraces or native strains and 209 varieties of the grain. The country produces 22 million tonnes a year but imports between eight and ten million tonnes annually, according to agriculture ministry statistics. The country purchased about two million tonnes of GM maize from South Africa over the last two years, and is set to import another 150,000 tonnes.

This country of 117 million people has some three million maize producers who raise the crop on an area of eight million hectares. But more than two million grow maize for their own family consumption. Domestic production focuses primarily on white maize, while yellow maize, used for animal feed, is imported.

Environmental, scientific and rural organisations opposed to GMOs have found the contamination of native maize in at least five states, blamed on imported maize distributed by the government as part of its anti-poverty campaign.

Civil society and academia sounded the alert over the possibility that the government of conservative President Enrique Peña Nieto, in office since December, would approve the commercial planting of transgenic maize. They warned that GMOs posed risks to human health, the environment, and biological diversity.

On Jul. 5, organisations of farmers, indigenous people, beekeepers, environmentalists and consumers brought a class action lawsuit in an attempt to get the courts to block approval of commercial production of GMOs.

They argued that the limits established by the law are ineffective, because transgenic contamination has already occurred in several states, and large-scale commercial release would surpass the limits and legal restrictions and undermine people’s right to a healthy environment while threatening biodiversity and native varieties of maize.