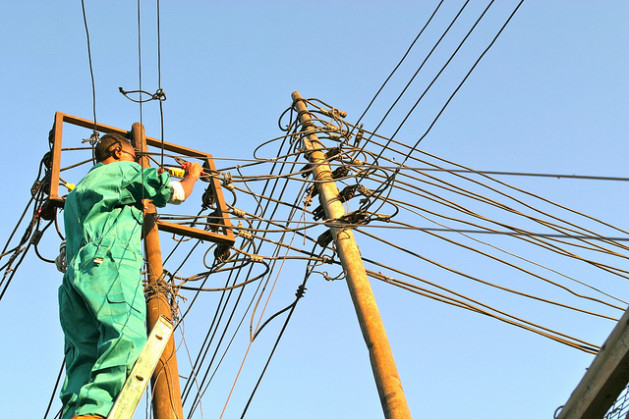 An electricity pylon in Somaliland being repaired by Edwin Mireri. Somaliland’s first Electricity Energy Act will be launched this year and it will be the country’s first legal and regulatory framework aimed at managing energy production and distribution. Credit: IPS

WASHINGTON, Jul 2 2013 (IPS) - During an eight-day trip to Africa, President Barack Obama unveiled an ambitious plan to improve access to electricity across the continent, a move the White House says is designed to lift Sub-Saharan Africa out of poverty and help the region develop a stable middle class.

While the initiative may appear to be a generous increase in U.S. government aid to the continent, analysts suggest that it is perhaps more noteworthy as a change in the paradigm of how the United States assists developing nations.

The plan, dubbed Power Africa, will be aimed at doubling access to electricity in the region, where some 85 percent of the rural population continues to lack access to power. The hope is that vastly increasing this infrastructure will in turn strengthen African economies.

“The initiative seeks to address a major, major issue,” John Campbell, a senior fellow for Africa policy studies at the Council on Foreign Relations, a think tank here, told IPS. “The absence of electrical power, among other things, makes it difficult to establish the kind of manufacturing that generates employment.”

Power Africa was announced on the heels of an address given by President Obama at the University of Cape Town, in South Africa. The president, who has been criticised for actions that fail to live up to his impressive speeches and for largely ignoring Africa during his first term, called on the United States to “up [its] game when it comes to Africa”.

The president also asserted that development assistance to the region would be in the United States’ own interests, saying an enlarged middle class there would translate into “an enormous market for [U.S.] goods”.

Establishing reliable sources of electricity, the Obama administration believes, will be a key part of the effort to bolster that middle class.

An estimate endorsed by the administration states that it would take around 300 billion dollars to grant all Sub-Saharan Africans access to electricity by 2030. With Power Africa, the U.S. ensures the region will receive seven billion dollars over the next five years.

That sum will be split among six countries (Kenya, Ethiopia, Ghana, Liberia, Tanzania and Nigeria). It will be used to exploit the region’s large, newly discovered reserves of oil and gas, as well as its potential to develop renewable energy from geothermal, hydro, wind and solar sources.

But, as Campbell points out, the way the United States will raise the seven billion dollars represents a shift in how it provides aid to Africa, focusing more on private trade and investment rather than on direct government aid.

“The old model would have been a government aid agency providing U.S. taxpayer money to fund development projects,” he says. “Here we will have the government partnering with private sources of money by guaranteeing against losses.”

Essentially, Campbell explains, the United States will marshal seven billion dollars’ worth of both money and material from private investors, who will then provide much of this by exporting manufactured goods intended to improve African infrastructure. These investors will be protected from losses by guarantees from Washington, which will play a role similar to that of an insurance provider.

Five billion dollars of support will be provided by the U.S. Export-Import Bank (Ex-Im) to U.S. exporters, while another 1.5 billion dollars in financing and insurance will come from government’s Overseas Private Investment Corporation (OPIC).

“At the end of the day, if it all works out well, the U.S. government will actually make money,” Campbell says.

He also notes that the new model will mean insured profits and new jobs for U.S. manufacturers assigned with exporting needed products.

Campbell is concerned, however, that the new plan could fall short of its goals without additional U.S. government funding. But given the budget-conscious attitude prevailing in the U.S. Congress, he suggests this funding could be unobtainable.

Some have speculated that the revamped assistance to Africa comes as a response to Chinese movement into the continent. China has, over recent years, invested massive amounts of its reserve funds into bolstering African infrastructure, and thus making inroads for future commercial and political relations.

Yet Campbell believes this speculation reflects an outmoded Cold War-era mentality and is an incorrect interpretation of what motivates the United States. He points out that Obama on Sunday welcomed investment in Africa by states other than the U.S. – including China.

“Governments and businesses from around the world,” Obama stated, “are sizing up the continent, and they’re making decisions themselves about where to invest [and] that’s a good thing. We want all countries – China, India, Brazil, Turkey, Europe, America – we want everybody paying attention to what’s going on here, because it speaks to your progress.”