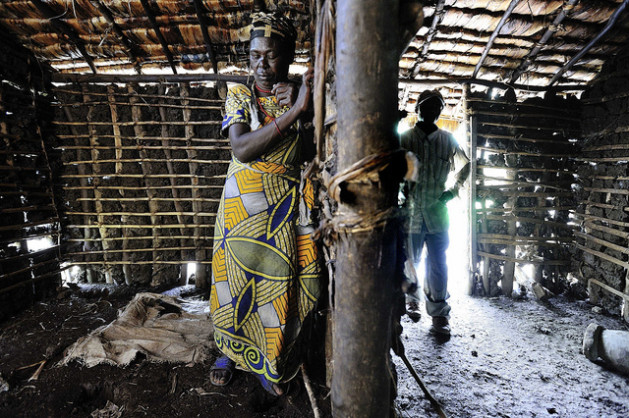 The village of rape survivor Angeline Mwarusena in DRC continues to be threatened by militia. Credit: Einberger/argum/EED/IPS

UNITED NATIONS, Jul 16 2013 (IPS) - Despite the United Nations’ “zero tolerance” policy against sexual violence, there has been a rash of gender-based crimes in several of the world’s conflict zones, including South Sudan, the Democratic Republic of Congo (DRC), Northern Uganda, Somalia, the Central African Republic – and, more recently, in politically-troubled Egypt and Syria.

Since most of the heinous crimes are taking place in conflict zones overseen by U.N. peacekeeping missions, the United Nations is unleashing an army of Women Protection Advisers (WPAs) to specifically curb sexual violence in war zones.

For starters, they will be deployed with peacekeeping missions in South Sudan, the Central African Republic, Cote d’Ivoire, DRC, Mali and Somalia.

Asked if these WPAs will be confined to Africa, Andre-Michel Essoungou of the Public Affairs Division at the U.N.’s Department of Peacekeeping Operations and Field Support told IPS, “There is no restriction to a region of the world in this regard. But the process is starting with these missions for the time being.

“The recruitment procedures are currently underway,” he added.

Marcy Hersh, a senior advocate for women and girls’ rights at Refugees International, told IPS her organisation insists that prior to the further deployment of WPAs to peacekeeping and political missions, the United Nations should take urgent action to ensure that WPAs are trained before their deployment and encouraged to work collaboratively with already operational humanitarian structures.

Additionally, they should be held accountable to fundamental and non-negotiable ethical and safety criteria for investigating sexual violence in conflict, which preserves the safety and dignity of survivors.

She said the recently unanimously passed Security Council Resolution 2106 includes language that is in accordance with these recommendations in its calls for the timely deployment of WPAs, their adequate training, and their coordination across multiple sectors.

Given this strong language, combined with the statements from multiple member states that WPAs should be deployed to all peacekeeping and political missions, Hersh said, “I am confident that the United Nations will work urgently to improve the rollout of WPAs.”

She said she is also hopeful that the United Nations will ensure that WPAs collect timely, objective, accurate and reliable information as a basis for prevention and response programming and preserve the safety and dignity of sexual violence survivors.
The secretary-general said that U.N. Women and the Department of Peacekeeping Operations (DPKO) have developed, on behalf of the U.N. Action Network, the “first-ever scenario-based training programme for peacekeepers”, some of whom, along with aid workers, have been accused of sexual violence – specifically in South Sudan, DRC, Cote d’Ivoire and Haiti.

The United Nations will also set up a team of experts on “the rule of law and sexual violence in conflict”, described as an important tool for strengthening national justice systems and legal frameworks.

Zainab Hawa Bangura, the U.N.’s special representative on sexual violence in armed conflict, points out that 20 years ago, the United Nations had provided “irrefutable evidence” of widespread and systematic rape in the countries of the former Yugoslavia.

She said that during a recent visit to Bosnia – where an estimated 50,000 women had been raped or been victims of sexual violence – she discovered that, to date, only a handful of prosecutions had occurred.

“Thus the victims of those crimes continue to walk in shadow and shame, unable to lay the past to rest and move forward.”

More recently, in late June, the United Nations described as “unacceptable” several cases of rape of young girls in DRC.

Nine young girls, aged between 18 months and 12 years, were admitted to a hospital in South Kivu with marks of violence on their bodies and very serious internal wounds, resulting in the death of two.

“Such violence and abuse is unacceptable and must be brought to an end,” said Roger Meece, head of the U.N. peacekeeping mission in DRC (MONUSCO).

“These abuses are said to be related to harmful traditional practices perpetrated by individuals who kidnap young children from their communities,” he said.

There have also been widespread reports of 135 women and girls allegedly raped by government soldiers in Minova in eastern DRC back in 2012.

Najat Vallaud-Belkacem, France’s minister for women’s rights, told reporters at a U.N. press briefing last month that condemnation of such crimes was not enough and that perpetrators should be prosecuted.

“France was very disturbed by such atrocities, whether committed by a rebel group or by government troops,” she added.