SINGAPORE, Aug 20 2013 (IPS) - A new Pacific islands forum will seek to challenge the dominance of Australia and New Zealand in a regional body. The new grouping’s approach is being billed the ‘Pacific Way’, and also the ‘green and blue’ way for its commitment to environmentally sustainable oceans as well as land.

The new Pacific Islands Development Forum (PIDF) challenges the Pacific Island Forum (PIF), a 16-member inter-governmental organisation which includes 14 Pacific Island countries plus Australia and New Zealand. The PIF is headquartered in Fijian capital Suva. Fiji itself was suspended from the PIF in 2009 after naval commander Frank Bainimarama grabbed power in a coup in 2006 and refused to hold elections. 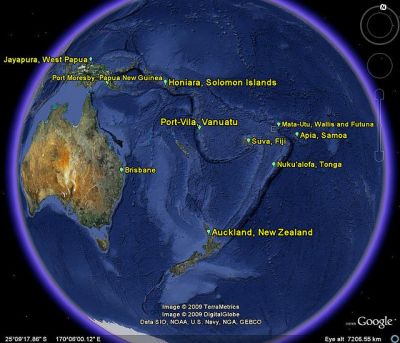 Bainimarama, now prime minister of Fiji, said at the launch of the PIDF earlier this month that people “have largely been excluded from the decision-making process,” and that the PIDF would do it differently.

“It has been no secret that Commodore Bainimarama has great distaste for the Pacific Islands Forum, especially over the hypocritical way that the Forum has treated Fiji since the military coup,” Prof. David Robbie, director of the Auckland-based Pacific Media Centre, told IPS.

“Attempts by the Forum to destabilise Fiji have backfired. For all the criticisms of the Fiji regime, there are positive moves to ‘open up’ the region for greater development partnerships with Asia.”

Bainimarama is riding resentment among Pacific island nations that the PIF is dominated by highly-paid Australian, New Zealand and other western expatriates, trying to impose developed country solutions on Pacific problems.

“We’re so sheltered away from the rest of society,” Kiribati President Anote Tong said in an interview with Radio Australia. “We’re a club of our own in retreat and away from questions from people demanding answers.”

At closed-door PIF meetings, leaders usually come dressed in suits, while at the PIDF meeting they were all dressed in the colourful short-sleeve Pacific-style shirts, and all discussions were in open forum.

For the first time in a major Pacific Island forum, business, church and civil society leaders sat alongside national political leaders, and spoke at the same forums. Such interaction is being projected as a ‘Pacific Way’ of consultation.

The PIDF is gaining support, said Robbie. “Bainimarama achieved a coup in successfully getting Timor-Leste Prime Minister Xanana Gusmao to the PIDF in spite of Australian attempts to prevent him going. Having the East Timor leader there was an important bridge for Asia-Pacific relations.”

The launch of the PIDF reflects new realities in the region, where Australia and New Zealand no longer have a stranglehold on aid handouts. In the past decade China and many other Asian countries have begun to give aid to and invest in the region. The PIDF meeting was funded by grants from China, Kuwait and the United Arab Emirates.

The leaders of the Solomon Islands, Kiribati and Nauru attended the meeting along with the deputy prime minister of Vanuatu and the vice-president of Micronesia. Senior ministers from most other Pacific nations and territories also attended.

While Australia and New Zealand sent observers to the meeting, special envoys came from China, Russia and a range of countries such as Chile and Cuba. Government ministers were sent to represent the United Arab Emirates, Kuwait and Qatar.

A clear division between Melanesian and Polynesian nations of the Pacific seems to have opened up, with leaders of Polynesian countries like Samoa, Tahiti and French Polynesia boycotting the meeting.

The Polynesian nations have a tendency to side with Australia and New Zealand in regional affairs, but Melanesian nations make up about 90 percent of the Pacific Island population, and the Melanesian Spearhead Group (MSG) is an influential grouping in the region.

Australia blocked Commodore Bainimarama taking over the leadership of the MSG spearhead group within the PIF in 2010 – a decision that seems to have backfired.

“MSG is the real economic powerhouse of the Pacific and is a serious challenge to the old Forum (largely dominated by the Polynesian islands and Australia and New Zealand),” Robbie said. “And now the PIDF is a new threat.”

In an interview with IPS from Suva, executive director of the Pacific Islands Association of Non-Governmental Organisations (PIANGO) Emele Duituturaga said many now expect PIDF to give more value to Pacific expertise and to be founded on Pacific perspectives.

“More importantly the governing and secretariat structures will include all sectors, especially civil society, which the PIF has been overlooking,” she said.

“The new organisation should ensure that the process and structures that are put in place are inclusive,” she added. “It will be a mistake for the governments to just set it up and expect us to go along with it.”