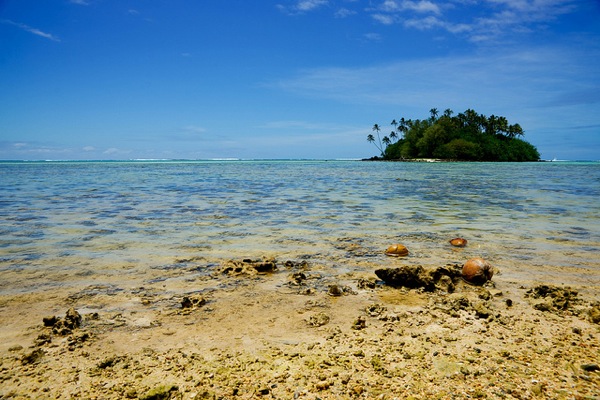 In its efforts to protect and preserve the oceans, the Cook Islands will create a new marine park, which will allow only sustainable activities. Brian Scantlebury/CC by 2.0

RAROTONGA, Cook Islands, Aug 31 2012 (IPS) - The world’s smallest island nations wield more power than their sizes would suggest, with millions of square kilometres in their domains, said leaders of Pacific Island nations gathered at a special forum here in the Cook Islands.

“Our nations collectively span 40 million square kilometres of ocean, an area bigger than the surface of the moon,” said Tuiloma Neroni Slade at the opening of the 16-nation Pacific Islands Forum, of which he is secretary-general.

Leaders from member countries including New Zealand and Australia, as well as more than 500 delegates from around the world, are participating in the forum, which ended Friday. The combined exclusive economic zones (EEZs) of forum members cover close to eight percent of the planet’s surface and 10 percent of its oceans.

“Yet we probably know more about the moon’s surface than the ocean that surrounds us,” Slade told delegates earlier this week. Their states’ links to the ocean constitute an ancient relationship “that lies deep in the character and culture of every Pacific community”, he said.

“We have a deep spiritual connection to the ocean,” Cook Islands Prime Minister Henry Puna agreed. The Cook Islands, a South Pacific nation of less than 20,000 people across 15 islands and located 2,000 kilometres northeast of New Zealand, has an EEZ of 1.8 million square kilometres.

“We need to change mindsets and have a more balanced view…(with) our islands fully integrated into an ocean of opportunity and value.”

Coping with climate change, fostering sustainable development and protecting their ocean territories are the region’s big challenges. To meet these challenges, the 16 nations agreed to a collaborative framework for the integrated conservation management of the Pacific Ocean and Islands, known as the Pacific Oceanscape.

The world’s largest government-endorsed ocean initiative, it covers ocean health and security, governance, and sustainable resource management, and it facilitates the partnerships and cooperation needed to support the conservation of this vast ecosystem.

The Cook Islands’ contribution to the Pacific Oceanscape, announced at the forum, is to create world’s largest marine park – nearly 1.1 million square kilometres, an area bigger than France and Germany.

The new Cook Island Marine Park will be zoned for multiple uses including tourism, fishing, and potentially deep-sea mineral extraction but only if these activities can be done sustainably. The precautionary principle will determine what activities can take place, Puna said.

Inspired by Kiribati’s creation of the 400,000-square-kilometre Phoenix Islands Protected Area in 2008 and by other island nations’ conservation efforts, New Caledonia, a French overseas territory in the south Pacific, also announced the creation of a new marine protected area (MPA) roughly half the size of India.

New Caledonia’s protected zone will include the world’s largest lagoon, about 24,000 square kilometres, a government representative said. The new MPA will be adjacent to Australia’s newly protected 1 million square kilometres in the Coral Sea.

“With care, (these regions) can be maintained as enduring sources of prosperity,” he said.

“This is a huge moment in history,” said Peter Seligman, chairman of Conservation International (CI),

There is a unique and positive atmosphere in the Pacific to conserve and protect the oceans for future generations and for all of humanity, Seligman told IPS, adding that the leader of Niue had just told him “they want to do something as well”. Niue is one small island with a population of 1,400, but its EEZ is 316,000 square kilometres.

CI has worked with governments and communities of the Pacific Ocean for more than 15 years, contributing to the design of several large-scale marine conservation efforts, including the Eastern Tropical Pacific Seascape, Kiribati’s Phoenix Islands Protected Area and the Pacific Oceanscape.

While there is a lot of pressure to exploit their oceans’ resources – the region has 60 percent of the world’s tuna stocks – these Pacific Island nations maintain a strong cultural connection to the oceans, Seligman said.

“They see themselves as part of the oceans,” he said. “I hope they can continue to exert their traditional wisdom and understanding.”