"But what I think the American people also expect me to do as president is to think through what we do from the perspective of, what is in our long-term national interests?…Sometimes what we've seen is that folks will call for immediate action, jumping into stuff, that does not turn out well, gets us mired in very difficult situations, can result in us being drawn into very expensive, difficult, costly interventions that actually breed more resentment in the region." -- President Barack Obama, CNN, Aug. 23, 2013 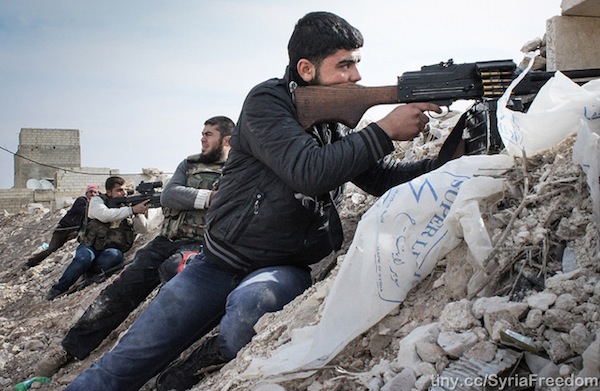 WASHINGTON, Aug 26 2013 (IPS) - President Obama got it right. He was picked by U.S. voters to put the nation’s interests first – not those of any ally, any member of Congress, or the media, even if they clamour for him to “do something” yet do not take responsibility for the consequences if things go wrong, as they have for some time in the Middle East.

Today, the issue raised by U.S. media and some of America’s allies are allegations that Syrian President Bashar al-Assad used poison gas to kill or maim thousands of Syrians. The consensus among Western commentators, in and outside of the government, has been built around this proposition, and it may be right.

United Nations inspectors may be able to verify the causes and perpetrators of these deaths and injuries. Let us hope so, before the United States or other countries begin direct military action of any kind that will be crossing the Rubicon.

Perhaps U.S. intelligence knows the facts; again, let us hope so. And let us hope that we do not later discover that intelligence was distorted, as it was before the ill-fated U.S.-led invasion of Iraq in 2003, the consequences of which are still damaging U.S. interests in the Middle East and eroding the region’s stability.

In addition to being unable to turn back once the United States becomes directly engaged in combat, however limited, is the difficulty of believing that Assad would have been so foolish as to use poison gas, unless Syrian command-and-control is so poor that some military officer ordered its use without Assad’s permission.

If one invokes the concept of cui bono (“to whose benefit?”), those with the most to gain if the United States acted to bring down the current Syrian government would be Syrian rebels or their supporters, including Al Qaeda and its affiliates. Such a move would increase the likelihood of even more killing and perhaps genocide against Syria’s Alawites.

"It has long been clear that the Syrian conflict is not just about Syria."
-- Robert E. Hunter

But citing the possibility that we are all being misled about who used poison gas – a tactic known as a false flag – does not mean it is true. It does redouble the need for the United States to be certain about who used the gas before taking military action. Obama has gotten this right, too.

So if we become directly involved in the fighting, then what?

This question must always be asked before acting. Sometimes, such as with Pearl Harbour, Hitler’s declaring war on the United States, or pushing Iraq out of Kuwait in 1991, striking back hard for as long as it takes is clearly the right course.

Less clear of a situation was Vietnam. Ugly consequences also ensued from arming and training Osama bin Laden and his ilk to punish the Soviet Union in Afghanistan, and, in one of the worst foreign policy blunders in U.S. history, from invading Iraq in 2003.

It has long been clear that the Syrian conflict is not just about Syria. It is also about the balance between Sunni and Shia aspirations throughout the core of the Middle East. Iran, a Shia state, started the ball rolling with its 1979 Islamic revolution. Several U.S. administrations contained the virus of sectarianism, but invading Iraq and toppling its minority Sunni regime got the ball rolling again.

Now Saudi Arabia, Qatar and Turkey are bent on toppling the minority Alawite – a mystical offshoot of Shi’ism – regime in Syria. Even if they succeed, the region’s internecine warfare won’t stop there.

Meanwhile, there is a geopolitical struggle for predominance in the region, principally involving Iran, Saudi Arabia, Turkey and Israel. Iran has Shia-dominated Iraq, Assad’s Syria, and Hezbollah as acolytes. Saudi Arabia has the other Gulf Arab states, while Turkey has its regional ambitions extending to Central Asia. And since Israel’s conclusion that its Syrian strategic partner, the Assad family, is doomed, it has thrown in its lot with the Sunni states. But it wants change before Syria is completely dominated by the fundamentalists.

From the U.S. perspective, the regional situation is a mess, and the tipping point that would make things much worse could be direct military intervention in Syria.

It is too late for Obama to take back his ill-considered statement about the use of poison gas being a “red line” in Syria when he was not prepared to go for broke in toppling Assad. It is too late as well for him to reconsider his call for Assad to go, which further stoked the fears of the Alawites that they could be slaughtered.

It is also late for him to tell Gulf Arabs to stop fostering the spread of Islamist fundamentalism of the worst sort throughout the region, from Egypt to Pakistan to Afghanistan, where American troops have died as a result.

It is also late, but let us hope not too late, for a U.S.-led full-court press on the political-diplomatic front to set the terms for a reasonably viable post-Assad Syria rather than sliding into war and unleashing potentially terrible uncertainties. Let us recall what happened in Afghanistan after we stayed on after deposing the Taliban, and in Iraq after 2003. Neither place is in much better shape, if at all, even after the loss of thousands of U.S. lives and trillions in U.S. treasure.

And it is also late, but hopefully not too late, for the Obama administration to engage in strategic thinking about the Middle East; to see the region from North Africa to Southwest Asia as “all of a piece”, and to craft an overall policy towards critical U.S. interests throughout the area.

This week, President Obama should heed the clear wake-up call, resist the call to do something militarily in Syria, and place his bet on vigorous and unrelenting diplomacy for a viable post-Assad Syria and the reassertion of U.S. leadership throughout the region.