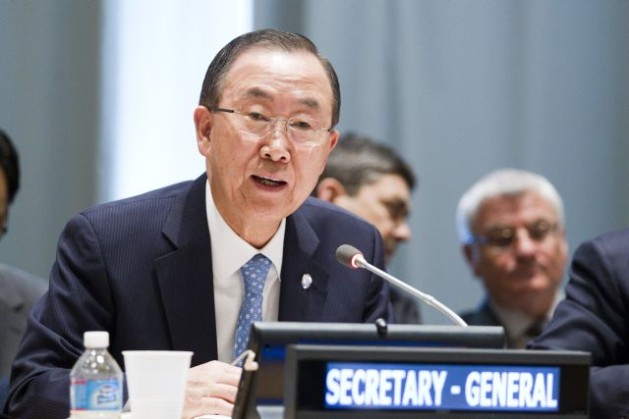 UNITED NATIONS, Aug 14 2013 (IPS) - Secretary-General Ban Ki-moon, who has refused to describe the Egyptian army’s ouster of a democratically-elected government last month as a “military coup”, lambasted the country’s security forces for Wednesday’s massacre of civilians in the streets of Cairo.

He condemned in the “strongest terms” the violence that occurred when the Egyptian military used force to clear Cairo of sit-ins and demonstrations.

“While the U.N. is still gathering precise information about today’s events, it appears that hundreds of people were killed or wounded in clashes between security forces and demonstrators,” he added.

Asked why Ban still refuses to describe the army takeover as a “coup”, U.N. associate spokesperson Farhan Haq told IPS, “No real comment on that; I think the language of the statement speaks for itself.”

According to reports out of Cairo, the death toll was around 149 – and rising. The number of injured has been estimated at over 1,400.

The country’s agony is a boon to the army, the secret police and other elements of the “deep state”, he added. Over the last two years, with the eager cooperation of state-run and private media, they have painted themselves as national saviours in the minds of a majority of Egyptians, Toensing said.

“Today’s massacres, sadly, will cement that image for the near future,” he said.

“It is the nastiest trick in the autocrat’s book. Cry ‘after us, the deluge’, then disappear from public view and watch the deluge occur, so as to ride back on a white horse,” said Toensing. “As for the shameful U.S. position, it simply proves that the real U.S. ally in Egypt is the army, as has been the case since Camp David, if not before.”

He said the meek calls for restraint from Washington, Europe and the United Nations are reminiscent of nothing so much as the similar pabulum issued when Israel mounts an assault on Gaza or the West Bank.

The U.S. brokered the 1979 Camp David peace treaty between Israel and Egypt, delivering billions of dollars’ worth of economic and military aid to both countries.

U.S. Secretary of State John Kerry told reporters last week: “The (Egyptian) military was asked to intervene by millions and millions of people.

“The military did not take over, to the best of our judgment – so far,” he added.

If the administration of President Barack Obama had described the take over as a “coup”, it would have been forced to cut off all U.S. aid to Egypt, amounting to over 1.5 billion dollars annually, under current U.S. legislation.

The U.S. fear is that such a drastic step would further destabilise the country, which is already in the throes of a major political crisis.

Dr. Toby C. Jones, associate professor in the Department of History at Rutgers University, described the U.S. position on Egypt as “hypocritical”.

“The U.S. primarily approaches its relationship with Egypt through the framework of security and strategic interests – thus the military, not human rights or democracy,” he told IPS.

He said the Obama administration has exactly who it wants in power in Cairo.

“Of course, American officials would prefer that they behave better and avoid the kind of violence that is taking place now, but not enough to denounce it strongly or consider political alternatives,” said Jones, who has a doctorate in Middle East history from Stanford University.

Asked about a proposal for Security Council intervention in Egypt, U.N. deputy spokesperson Eduardo del Buey told reporters Wednesday that would be a decision for the Council members to take. “The secretary-general will not opine on that,” he said.

In a statement released Wednesday, Ban said that only days ago, he renewed his call for all sides in Egypt to reconsider their actions in light of new political realities and the imperative to prevent further loss of life.

Ban said he regrets that Egyptian authorities chose instead to use force to respond to the ongoing demonstrations. He conveyed his condolences to the families of those killed and his wishes for a full and speedy recovery to those injured.

The secretary-general also said he is well aware that the vast majority of the Egyptian people, weary of disruptions to normal life caused by demonstrations and counter-demonstrations, want their country to go forward peacefully in an Egyptian-led process towards prosperity and democracy.

In the aftermath of today’s violence, he urged all Egyptians to concentrate their efforts on promoting genuinely inclusive reconciliation.

While recognising that political clocks do not run backwards, the secretary-general said he also believes firmly that violence and incitement from any side are not the answers to the challenges Egypt faces. With its rich history and diversity of views and experiences, it is not unusual for Egyptians to disagree on the best approach forward, he added.

What is in important, in the secretary-general’s view, is that differing views be expressed respectfully and peacefully.

To his regret, that is not what happened today.