BERKELEY, California, Aug 7 2013 (IPS) - Before an ultimatum to attack an anti-coup sit-in earlier this week, Egypt’s new strongman and coup leader Gen. Abdel Fatah Al-Sissi received one of his warmest endorsements ever – something that might have been torn right out of the steamy pages of the “Arabian Nights”. 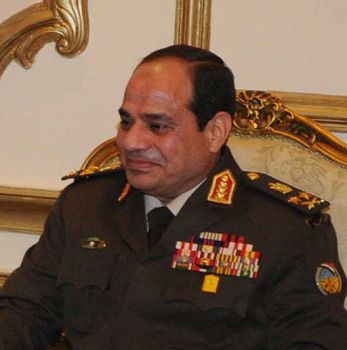 A female secular columnist for the liberal, privately-owned daily Al-Masry Al-Youm wrote in support of his planned action, literally offering herself as “a sex slave”.

If this sounds like a typical example of how depraved Arab tyrants such as Saddam Hussein and Hafez Al-Assad strengthened their iron grip on their countries on the shoulders of compliant media and elites, it is because it is.

After all, this is the Middle East where more than two years after the Arab Spring, the elite, military and local media remain the world’s most skilled inventors of ruthless autocracies, from mad despots such as the deceased Muammer Gaddafi of Libya to brutal tribal monarchs such as the Al Saud royal family in Saudi Arabia and Al Nahian tribe in the United Arab Emirates.

It is through armies of similar cheerleaders who are willing to enslave and humiliate themselves that those rulers rise in tyranny and establish their unrivaled bloody hold on power. In Egypt, this is how pharaohs are made.

Hours after columnist Ghada Sherif offered her passionate physical backing, Sissi’s troops launched an overnight assault on his opponents. By daybreak, at least 82 people had been killed and dozens more injured, with many receiving sniper bullets in the head and neck.

The “sex slave” episode also shows the great lengths Sissi’s well- greased propaganda machine, backed by the treasures of the sprawling Egyptian military business complex and the riches of the country’s elite, will go to to catapult the 58-year old Sissi, or Super-Sissi as his fans call him, as Egypt’s saviour and next leader.

Sissi is backed by Egypt’s self-styled liberals, secularists and leaders of the Christian Orthodox minority who were routed and humiliated six consecutive times in fair and democratic elections at the hands of campaign-savvy Islamists during the country’s two-and-half year brush with democracy.

For them, tanks, assault rifles and military brass have become the only burrow they could ever dig to get close to office. To that end, they are showing utter disregard of law, human rights and respect for democracy.

As Sissi’s forces were slaughtering dozens of people and injuring many more in their overnight attack outside the Rabaa Mosque in Cairo Saturday morning, Pope Tawadros, leader of the country’s five million Christian Coptic minority, who detests Islamist parties, jubilantly tweeted: “Thank you to Egypt’s great military and its wonderful police force, for opening the doors of hope.”

Tawadros repeated “thank you” six times in his post.

And despite the bloodshed at the hands of Sissi’s military and police, the state-run Al-Ahram newspaper made splashing headlines of a report that one Egyptian man in the Red Sea city of Suez named his newborn child “Sissi”.

So thirsty for legitimacy and public acceptance of their coup outside of their supporters, the top commander of Egypt’s Third Army, who is supposedly busy fighting terrorism in Sinai, took time off to pay the parents a visit and hand them a reward for naming the new baby after the coup’s leader’s highly uncommon name. As expected, cameras were there to take pictures.

The Facebook page of the Egyptian military’s propaganda arm, the Morale Affairs, and other sympathetic Facebook pages widely believed to be run by intelligence officers entrusted with peddling Sissi to the public are lavishing pictures of tough, muscular and mustached officers in camouflaged uniforms, stamping a drooling kiss on portraits of Sissi.

The image-building gets even more ridiculous with attempts to create unsubstantiated heroic tales for Sissi.

A military Facebook page popular with Sissi’s fans and other obedient newspapers claimed that the U.S. Fifth Fleet was sent to Egypt’s shores last week to intervene in the turmoil only to be sternly told off by “Sissi the brave”.

The Americans tucked their tails between their legs and left the Mediterranean after Sissi’s thunderous warning, so the fable goes.

“Sissi threatened to annihilate the U.S. Fleet,” declared Al-Nahar newspaper of the story.

The signs are unmistakable. Such folk tales were a hallmark of Gaddafi’s 40-year rule, with his media inventing gallant military adventures for the consumption of gullible Libyans in a bid to legitimise his reign.

Over the past month, Sissi had displayed other megalomaniac traits a la Gaddafi, the touchstone of despotic tyranny in the region, who had a penchant for full military uniforms, sunglasses and extravagant medals. Sissi gave his last speech in identical dark eye shades, a full ornamental cap and a chest full of colorful medals.

But more ominous are the signs of how Sissi is concentrating power for his rule.

Egyptian prisons are filling up fast. Media outlets critical of the military are shuttered. Coup opponents face threats of confiscating their property and hurriedly cooked up criminal charges.

Ousted president Mohammed Morsi himself was held incommunicado for nearly a month before far-fetched accusations of espionage for the Palestinian group, Hamas, were conjured up.

Editors from the privately-owned pro-coup Shorouk newspapers banned articles by two writers, Wael Kandil and Ahmed Mansour, for questioning the coup leader’s ability to bring stability to Egypt. One of them, Kandil, later quipped that the incident made Hosni Mubarak sound like an angel as none of his harsh columns were censored before.

Worse, Gen. Sissi disbanded the elected Shura Council, revoked the constitution agreed upon by a whopping 64 percent vote in fair elections, and re-instated officers of the country’s repressive secret police, the country’s most hated and feared institution, who were fired after the Jan. 25, 2011 uprising against Mubarak for human rights abuses.

The secret police have powers to censor the media, screen applicants for government jobs, arrest opponents and hunt down dissidents with complete impunity.

Bearded men and women who choose the Islamic covering are stopped, arrested or abused based on their visible religious orientation. Those who are not visibly religious complain about the maltreatment at checkpoints and the return of non-optional bribes to traffic officers.

The rhetoric from the private media, owned by the country’s wealthy elite classes and members of the minority Christian Coptic church who both support Sissi, routinely encourage crackdowns against opponents. Examples include urging Sissi to cut off water and electricity from opposition sit-ins, flooding the sit-ins with sewage, and calls to shoot at “just their legs”, while all along showing fanatical devotion for their new Pharaoh, Sissi the Savior.

But nobody has yet matched Sherif’s offer. “Sissi, all you have to do is just wink,” the liberal writer titled her column.

“He is a man that Egyptians are infatuated with. If he wants to take four wives, then we are at his bidding. If he wants just a sex slave, by God, we’ll not be hard to get either.”

Emad Mekay is a John S. Knight Journalism Fellow at Stanford University. He worked for The New York Times, Bloomberg News and Inter Press Service in the Middle East. He is the founder of America In Arabic News Agency. He covered most of the initial protests of the Arab Spring for The International Herald Tribune and for Inter Press Service.