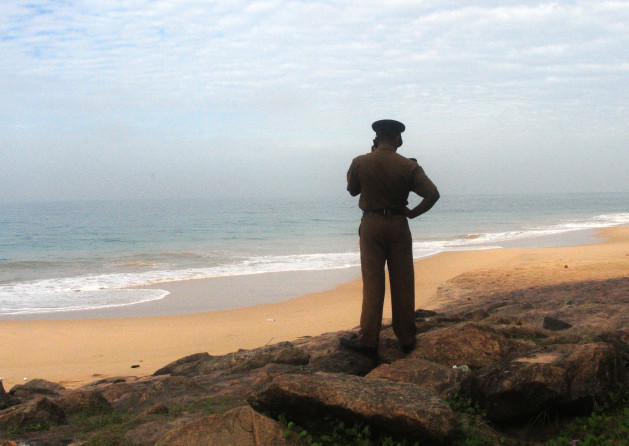 A police officer on the lookout at a spot near the southern town Galle often used by people to board boats to Australia. Credit: Amantha Perera/IPS.

COLOMBO, Sep 22 2013 (IPS) - It was a decision based on simple sums. Ananda, 28, from Weligama in the southern Sri Lankan district Matara decided to risk it all boarding a boat to Australia last year because he never had enough money.

“I was working as a driver in someone’s three-wheel taxi and making around 25,000 rupees (180 dollars) in good months,” Ananda (name changed) told IPS. “I was fed up.”

He paid 300,000 rupees upfront, all from his mother’s savings, and joined a group of around 50 men for the 6,800 km journey that could have taken a month.

His voyage did not last long. He boarded a multi-day trawler after reaching it about three kilometres from the coast in a smaller boat around midnight. By lunch time next day he was back on shore.

“Someone gave a tip and the Navy was waiting for us about half an hour into the journey,” Ananda said.

The hard-line strategy appears to be working. In the last year the number of boats that have reached Australia from Sri Lanka has dropped.

Ananda was among at least 10,000 Sri Lankans who attempted the risky journey to Australia by boat last year. According to the Australian Department of Citizenship, 6,428 made it into Australian waters.

Sri Lankan authorities say they foiled the attempts by more than 3,000 last year. An unknown number are suspected to have perished at sea.

Ananda is from the Sinhala majority but only around 1,000 Sinhalese made it by boat to Australia last year. The large majority of those who take to the boats are from the Tamil minority from the war-ravaged north-east.

Kanan is a young man from Kilinochchi, the bustling economic nerve centre of the northern Vanni region. Devastated by a three-decade conflict that only ended in May 2009, the town is slowly recovering. For Kanan and many other young men like him, that recovery is too slow.

“There are no jobs here, none at all,” Kanan said. Unemployment in the region is the highest in the country, between five and eight percent according to government statistics but up to three times that according to independent analysts.

Kanan traveled to the eastern coast last August through a fixer in Kilinochchi who arranged for a spot in a crowded boat.

“I paid 100,000 rupees, the rest was to be paid by my family once I got there,” he said. The full cost was around a million rupees (7,000 dollars). His boat broke down six days into the journey and Sri Lankan naval vessels towed it back to the coast.

Kanan has returned to his native village, is still unemployed, and still harbours dreams of a richer life somewhere else.

Kanan says his decision to take the rickety boat that was using hand held GPS locators to track its route was influenced by the post-war political and security climate in the north. “I am always looked at with suspicion by security forces and police.”

The hard-line strategy appears to be working. In the last year the number of boats that have reached Australia from Sri Lanka has dropped. By the end of August this year, 1,957 Sri Lankans had reached Australia on boats, less than a third of the boat arrivals in 2012.

The new right-wing Australian government is expected to bring stricter measures such as turning back boats, removing options to review refugee claims, and reducing refugee quotas.

The Australian government action is based on the conclusion that the bulk of the illegal boat travellers are ‘economic opportunists’.

Emily Howie, director of advocacy and research at the Melbourne based Human Rights Law Centre, told IPS that economics did play a big role in motivating people to take the boats, but the decision was influenced by many other factors. “Sri Lankans take boats to Australia for a complex, interconnected mix of economic, political and security issues,” Howie said.

She has published a research paper titled Sri Lankan Boat Migration to Australia, Motivations and Dilemmas in which she argues that turning back boats is not the solution to stop Sri Lankans trying to come by sea.

Howie told IPS that the cases of 90 percent of Sri Lankans who have sought refugee status in Australia after arriving by boat have been found to be genuine. “Instead of cutting off options, Australia should work with other countries in the region to ensure safe, viable paths to protection for those who need to seek it.”

Other analysts say the biggest motivator has been and still is financial. “Economic desolation is the fundamental cause for migration abroad even among ex-combatants,” Muttukrishna Sarvananthan, an economist who heads the Point Pedro Institute of Development, an economic research centre based in northern Jaffna in Sri Lanka, told IPS.

He said he carried out a survey in the northern regions of the island in late 2010, specifically targeted at groups like former combatants, youth and single women. His findings were that more than 70 percent declared poor living conditions the main reason for wanting to leave the country.

Another 41percent said they were also influenced by lack of opportunities. Only 14 percent said that the security environment was the main reason they wanted to flee Sri Lanka.