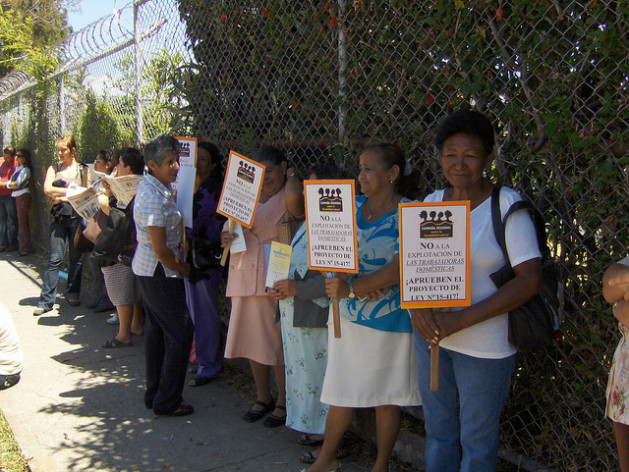 A protest by domestic workers in Costa Rica for an eight-hour day. Credit: Daniel Zueras/IPS

WASHINGTON, Sep 4 2013 (IPS) - An international convention enters into effect on Thursday that could eventually extend labour rights to as many as 100 million domestic workers across the globe, a constituency that has historically been bypassed by national laws.

The new Domestic Workers Convention, a binding agreement passed under the auspices of the International Labour Organisation (ILO) in 2011, has thus far been ratified by nine countries. Those governments will now be tasked with ensuring that their national labour legislation both extends to domestic workers and ensures those workers a decent work environment.

"Probably the most significant holdouts right now are the countries of the Middle East." -- Jo Becker of Human Rights Watch

Such positions include maids, nannies, in-house cooks, caregivers and other labour in private homes – workers that have long been considered to be among the most exploited anywhere in the world. Proponents are not only lauding the convention’s specifics but also suggesting that the accord will do much to solidify the social and official understanding of domestic work as on par with any other employment.

“The victory of the ILO Convention was a monumental step forward in our fight for recognition that domestic work is work,” Jill Shenker, field director for the National Domestic Workers Alliance (NDWA), a U.S. advocacy group, told IPS.

Official numbers suggest there are around 53 million domestic workers around the world today. Yet the ILO reports that many experts expect this number is actually as high as 100 million people, some 83 percent of whom are women and children.

Such numbers would constitute around 3.6 percent of the total global workforce, and up to 12 percent of all workers in developing countries. Yet these workers have traditionally been excluded from national labour protections.

“The ILO flagged this issue as far back as 1965, warning that domestic workers needed stronger international standards, but there’s been inaction since then largely because these workers didn’t have a constituency raising the issue,” Jo Becker, advocacy director for Human Rights Watch’s children’s rights division, told IPS.

“Because they were part of the informal sector and seen as difficult to mobilise, domestic workers have also traditionally been excluded from the trade unions, which have a lot of sway at the ILO. So for many years no one was really paying attention to their interests.”

Becker says that situation started to change within the past two decades, when networks began to form in Latin America alongside notable national movements in Tanzania, South Africa and the Philippines.

The idea of pushing for an international convention started coming together around 2006, and the final text now appears to mostly satisfy labour rights activists. Ratifying countries will be required to ensure that domestic workers receive the same rights as other workers (including receiving clear terms and conditions of employment), to offer protections for migrants, and to prevent child labour and workplace abuse.

The convention calls for particular oversight of recruitment agencies, one of the key routes by which migrant domestic workers are find employment abroad. Countries will also be urged to institute a broad array of grievance and investigative mechanisms.

“We’ve found domestic workers making just a tenth of the prevailing minimum wage,” Becker says. “Yet the experience following the imposition of stronger legislation has been interesting. South Africa introduced a minimum wage for domestic workers in 2002, for instance, and found that it led to both more people willing to work as domestic workers and lowered poverty rates.”

To date, just nine countries have ratified the Domestic Workers Convention (Bolivia, Germany, Italy, Mauritius, Nicaragua, Paraguay, the Philippines, South Africa and Uruguay), though several others are reportedly in the process of doing so. Importantly, those that have moved towards ratification include countries from nearly all regions, including a mix of both developing and developed economies.

Further, since the convention was adopted in 2011, dozens of countries have undertaken legislative reforms in line with the accord’s guidelines. Earlier this year, for instance, Brazil amended its Constitution, while the Philippines and Argentina adopted far-reaching laws.

“Of course, there are some key countries that we would like to see ratify this convention – Indonesia, for instance, has a large number of domestic and migrant workers,” HRW’s Becker says.

“But probably the most significant holdouts right now are the countries of the Middle East. There have been many reports of abuses against migrant domestic workers in that region, but so far no Middle Eastern country has ratified the agreement – that’s the region that’s missing so far.”

Still, the signing of international treaties remains politically fraught in Washington. While a Labor Department spokesperson told IPS that the U.S. government “strongly supported” the convention’s adoption, it appears that the administration will not be pushing for ratification anytime soon.

“In 2012, we submitted [the convention] to the U.S. Congress and to the governors of the states and U.S. territories as required by Article 19 of the ILO Constitution, for their information and appropriate action,” the spokesperson said in a statement.

“Determining whether a convention is appropriate for ratification requires a rigorous and comprehensive review to establish full compliance at both the federal and state levels. [This convention] has not yet undergone such a review.”

Despite the legacy of a strong labour rights movement in the United States, for decades domestic workers here have been left out of some of the country’s most notable federal labour rights protections. These include regulations on wages and benefits, hazardous workplace conditions, compensation in case of injury, the right to organise and others.

“Many in the U.S. believe that the basic minimum standards laid out in ILO conventions hardly apply to the U.S. labour market because we already have strong labour rights compared to other countries,” the NDWA’s Shenker says. “But domestic workers in the U.S. are fundamentally excluded from some of the most basic labour protections offered to other workers.”