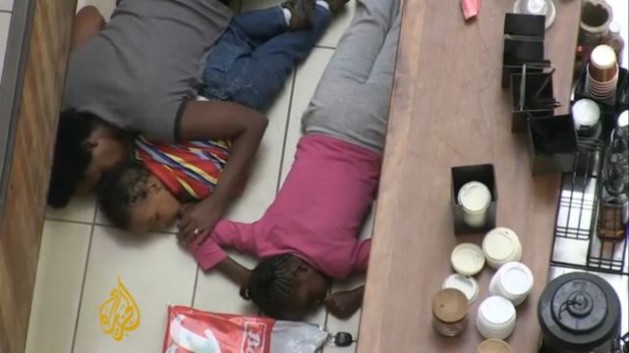 A mother and her children protect themselves pretending to be dead in Westgate mall. Credit: Al Jazeera

QATAR, Sep 23 2013 (IPS) - Heavy and sustained gunfire has been heard from the Nairobi mall where the Al-Qaeda-linked Somali Islamist rebel group Al Shabab are holed up, holding an unknown number of civilians hostage.

Two Al Shabab fighters have been killed in the ongoing military raid to end the standoff and nearly all hostages have been freed, Kenya’s Cabinet Secretary for the Interior Ole Lenku said on Monday.

“We don’t want to give you a definitive position on when we think the process will come to an end, but we are doing anything reasonably possible, cautiously though, to bring this process to an end,” Lenku told a news conference.

Black smoke has been seen rising and several blasts have been heard in the area, two days after Al Shabab fighters stormed the mall.

Lenku said a fire inside the mall was the work of the fighters, but that it would soon be extinguished.

He said that Kenyan forces were in control of all floors of the mall, and that “the terrorists are running and hiding in some stores […] there is no room for escape”.

Journalists and their cameras have been moved and no longer have a clear sight of the mall, but can see its perimeter.

“It is us who caused the explosion, we are trying to get in through the roof,” one security official, who asked not to be named, told the Reuters news agency at the scene. There was no official comment.

Al Jazeera’s Catherine Soi, reporting from the vicinity of the mall, said that the concern was that the fighters would not allow themselves to be apprehended, and that they might harm any remaining hostages.

“They went in there with a suicide mission, they knew that it was very difficult for them to get out alive. […] The concern really is the hostages. The ministry says that they have been able to evacuate most of the people in that mall … more than 1,000 people have been evacuated [since the siege began], but the concern is with the hostages [still in the building],” she reported.

Meanwhile, the International Criminal Court (ICC) announced that it was adjourning the trial of Kenya’s Deputy President William Ruto on charges relating to violence following elections in 2007.

The court said Ruto would be excused from the trial, which began earlier this month, for a week to return to Nairobi to help deal with the crisis.

On Sunday, Kenyan security forces claimed to have rescued most of the hostages, but an unknown number remain trapped inside.

Armed men belonging to the Somali group Al Shabab had stormed the Westgate shopping centre on Saturday using grenades and assault rifles. The attack left at least 68 people dead and more than 150 wounded, according to the Red Cross.

Colonel Cyrus Oguna, a military spokesman of Al Shabab, told Al Jazeera that most of the hostages had been released, though he did not provide an exact number. “Most of them were dehydrated and suffering from shock,” Oguna said, adding that four Kenyan soldiers were injured in the rescue operation.

As security forces intesified efforts to end the standoff late on Sunday, Meanwhile, Al Shabab, which has claimed responsibility for the siege, said on its Twitter feed that the “Kenyan government shall be held responsible for any loss of life as a result of such an imprudent move. The call is yours!”

It said “Kenyan forces who’ve just attempted a roof landing must know that they are jeopardising the lives of hostages.”

Al Shabab told Al Jazeera it carried out the attack in which they specifically targeted non-Muslims. Kenyans and foreigners were among those confirmed dead, including French, Britons, Indians, Canadians, Chinese and a renowned Ghanaian poet. Speaking to Al Jazeera later, Abu Omar, a spokesman for the group, ruled out any negotiations over the hostages being held.

The group is demanding that Kenya pull troops back from neighbouring Somalia, where Al Shabab is fighting against the government.

The United Nations Security Council condemned the attack “in the strongest possible terms,” and reminded Kenya that any response must comply with international human rights law.