UNITED NATIONS, Sep 24 2013 (IPS) - While the U.S. and Iranian heads of state have yet to meet, the 68th session of the United Nations General Assembly may mark a new era between the two countries.

After more than 30 years of frozen US-Iran relations, President Barack Obama announced Tuesday during his address to the world body that Secretary of State John Kerry would be directly involved in talks over Iran’s nuclear programme.

“As Javad [Zarif] has said, now is the time to stop behaving like carpet merchants." -- William Luers of the Iran Project

Kerry and Zarif are scheduled to meet on Thursday, EU foreign policy chief Catherine Ashton announced on Monday, adding that Zarif and the P5+1 (the U.S., Britain, France, China and Russia plus Germany) would meet in Geneva in October.

The Kerry-Zarif meeting would be the highest-level formal encounter of the two countries since the 1979 U.N. General Assembly when then Secretary of State Cyrus Vance met with Provisional Foreign Minister Ibrahim Yazdi seven months after the Islamic Revolution, according to Columbia University Professor Gary Sick.

“The U.S. would then be investing more in the diplomatic process, which means more political will and a greater cost of failure, and that is exactly what we need to overcome the political obstacles,” said the president of the National Iranian American Council.

The “mistrust” between the U.S. and Iran “has deep roots”, Obama said before acknowledging the U.S. role in “overthrowing an Iranian government” as part of U.S. “interference” in Iranian affairs. 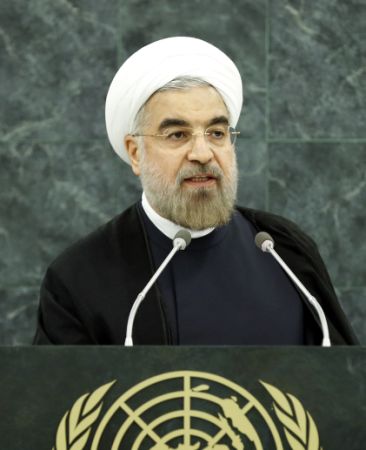 He went on to cite some of Washington’s own grievances, including the 1979 Iranian takeover of the U.S. embassy in Tehran and Iran threatening Israel “with destruction”.

But in a speech that emphasised the importance of pursuing diplomacy before resorting to force in securing U.S. interests, Obama’s message on Iran was clear.

“We should be able to achieve a resolution that respects the rights of the Iranian people, while giving the world confidence that the Iranian programme is peaceful,” he said.

“The fascinating thing is that he’s talking to multiple audiences and re-explaining to Americans why negotiating with Iran is the way to go,” Heather Hurlburt, a former speechwriter for President Bill Clinton, told IPS.

“We are not seeking regime change and we respect the right of the Iranian people to access peaceful nuclear energy.  Instead, we insist that the Iranian government meet its responsibilities under the Nuclear Non-Proliferation Treaty and U.N. Security Council resolutions,” said Obama.

“He’s signaling to Iran that we’re prepared for mutual rights and mutual respect at a moment when the Iranians seem more ready to hear that than in past and he’s signaling how we see that piece of the puzzle fitting in with other regional issues,” noted Hurlburt, who heads the DC-based National Security Network.

While Zarif listened to Obama’s morning address in the General Assembly auditorium, no U.S. delegate was visible during Rouhani’s afternoon speech.

For Iran’s part, Rouhani did not attend a lunch hosted by U.N. Secretary General Ban Ki-moon at which Obama was present. Iran also reportedly rejected a U.S. offer for an encounter earlier in the day.

But some experts suggest that too much attention has been placed on an Obama-Rouhani meeting.

“Expectations are already high on both sides but if nothing concrete is ready, a meeting without something solid would be damaging for each president,” William Luers, a former senior U.S. official and ambassador, told IPS in an email.

“As Javad [Zarif] has said, now is the time to stop behaving like ‘carpet merchants’,” said the director of the prominent Iran Project.

“Zarif and Kerry are as good a pair as we could ask for to find out whether diplomacy can succeed. We all believe it can. The handshakes can wait,” he said.

“The important development is that both sides appear to be serious at pursuing direct talks at a high level, and the important issue is whether those talks will make substantive progress,” international relations expert Stephen Walt told IPS.

“A brief meeting between Obama and Rouhani would have been stagecraft, but not statecraft,” said the Harvard Kennedy Professor.

During his speech, Iran’s president spoke strongly against foreign military intervention in the Middle East, particularly in Syria, and against the rounds of sanctions that have been imposed on Iran.

“Unjust sanctions, as manifestation of structural violence, are intrinsically inhumane and against peace. And contrary to the claims of those who pursue and impose them, it is not the states and the political elite that are targeted, but rather, it is the common people who are victimised,” he said.

“Rouhani had the delicate task of delivering a speech that addresses multiple audiences, and the first part of his speech, especially the part about the sanctions, was addressing a domestic hardline audience,” Yasmin Alem, a senior fellow at the Atlantic Council, told IPS.

“The second part was about Iran’s commitment to constructive dialogue and its willingness to negotiate and reach a settlement,” said the Iran expert.

“Iran seeks constructive engagement with other countries based on mutual respect and common interest, and within the same framework does not seek to increase tensions with the United States,” said the Iranian president, adding that he “listened carefully” to Obama’s speech.

“Commensurate with the political will of the leadership in the United States and hoping that they will refrain from following the short-sighted interest of warmongering pressure groups, we can arrive at a framework to manage our differences,” said the recently elected centrist cleric, who served as a nuclear negotiator under reformist president Mohammad Khatami.

“It was interesting to hear him to talk about how we can ‘manage’ relations,” Alem told IPS.

“Iran is still a long way from establishing normal relations with the U.S. and this echoes Obama’s words this morning in saying all that is down the road,” said Alem.

“It’s a good sign that both leaders are clear about the situation and on the same page,” she said.