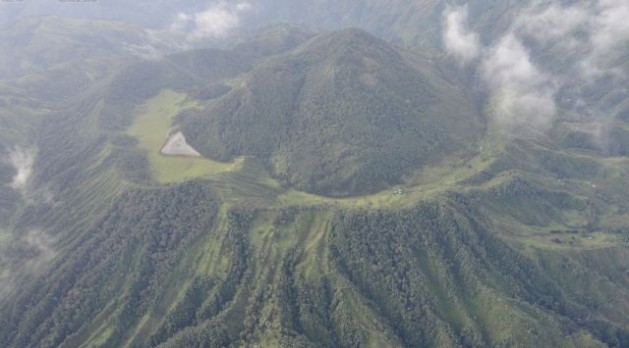 FINCA GALICIA, Cordillera Central, Colombia , Oct 26 2013 (IPS) - A new system of tunnels at the Alto de La Línea mountain pass in Colombia’s central Cordillera mountain range will open up a key logistics route for this country and neighbouring Venezuela. But it could be overcome by disaster if the Machín volcano erupts.

The complex engineering feat includes two main one-way tunnels, 8.8 and 8.6 km long, as well as 21 short tunnels and 29 viaducts that will total 6.8 km in length.

The first of the main tunnels, which will be the longest road tunnel in Latin America, is to be completed by mid-2014. The firms that will build the second tunnel have not yet been selected.

But in the department (province) of Tolima, the road passes six km from an unassuming hill which is actually the Machín volcano, one of Colombia’s most dangerous volcanoes, which has erupted six or seven times in the past 10,000 years. The most recent eruption occurred around 800 years ago.

Quick look at what would happen if the Machín volcano erupted:

* One million people directly affected
* Permanent relocation of the population from the area at risk
* The western and central parts of the country completely cut off
* Three important farming areas destroyed: Cajamarca; part of the province of Quindío; and the Tolima valley irrigation district
* Nearby towns covered with a layer of ash at least half a metre thick

The map recommends that the hazards posed by the volcano be taken into account in decision-making on “strategic medium and long-term plans for routes, especially roads.”

The La Línea tunnel and the Machín volcano are 15 km apart as the crow flies. If the volcano erupts, “the tunnel will be left without a road,” Calvache told IPS.

More than 100 monitoring stations keep an eye on the volcano 24/7. In 2008, authorities declared a yellow alert, which is still in place. (Green is for normal, yellow for alert, and red for warning and evacuation.)

Even the smallest eruption by Machín would be larger than the eruption of the Ruiz volcano, 45 km to the northeast, which in November 1985 spewed out 0.3 cubic km (km3) of lahar – mudflow or debris flow – which destroyed the town of Armero, killing 22,000 of its 28,000 inhabitants and leaving over 5,000 injured.

“Machín’s normal eruptions can cover several cubic kilometres. And the big ones have been approximately 20 km3,” Calvache said.

If the next one is big, “it will affect the entire central area of the country,” including parts of the provinces of Tolima, Quindío, Valle del Cauca and Cundinamarca that are home to nearly one million people combined, the geologist warned.

The Machín volcano’s eruptions “produce major pyroclastic flows (a fast-moving current of hot gas and rock). No one survives a pyroclastic flow, and the basin would be completely changed,” Calvache said.

“That change, in human terms, would be forever. It would be human beings who would have to adapt,” she said.

“The volcano has been changing,” she added. “What we don’t know is whether that change is headed towards an eruption or if it is simply being unruly and will go back to being calm again for many years.”

The authorities are apparently betting on the latter.

In the environmental impact assessment for the tunnel, “Machín isn’t mentioned as a risk factor,” environmentalist Néstor Jaime Ocampo, of the Cosmos Ecological Foundation based in Armenia, the capital of Quindío, told IPS. 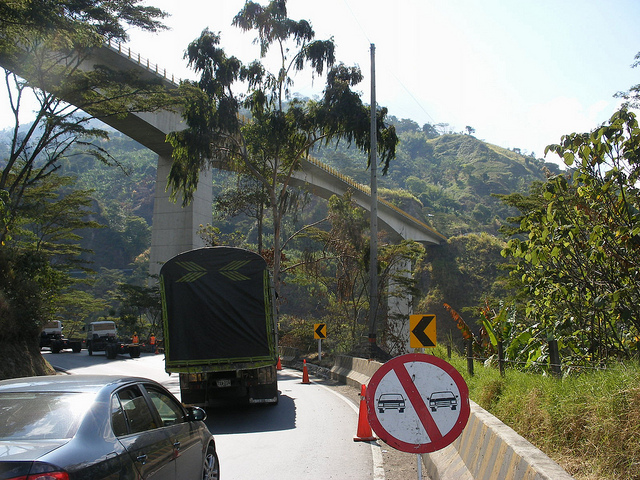 One of the 29 viaducts that form part of the project to upgrade the La Línea highway and mountain pass. Constanza Vieira/IPS

La Línea is essential for trade between Cúcuta, the main city on the border with Venezuela, in the northeast, and Colombia’s only Pacific Ocean port, Buenaventura, in the west.

The road runs through the wealthiest part of the country, the central highlands, where Bogotá is located.

“All of the freight that reaches Bogotá from the Pacific comes through here,” Luis Orlando Muñoz, the head of the Colombian Society of Engineers (SCI), told IPS. “Thousands of tonnes of imports and exports are transported daily. This is the country’s spinal column, when it comes to roads.”

Ocampo, the environmentalist, said “What is being built is a modern road corridor between Caracas and Buenaventura.” In other words, Venezuela’s outlet to the Pacific.

The corridor connects the Gulf of Venezuela in the Caribbean Sea with Ecuador on the Pacific, and it forms part of the plans outlined by the Initiative for the Integration of Regional Infrastructure in South America (IIRSA).

Like almost all roads in Colombia, the one joining Cúcuta and Buenaventura has just two lanes along most of its 1,020 km.

As it climbs into the central Cordillera range – the highest of the three branches of the Andes in Colombia – the road switchbacks through a stunning landscape of cloud forest, Quindio Wax Palm (Ceroxylon quindiuense), and the royal purple flowers of the Glory Bush (Tibouchina lepidota), and past paddocks and cliffs.

Truckers treat the La Línea route with respect. Because of the frequent fog, steep inclines of up to 18 percent, and tight curves, the average speed is just 18 km an hour. It took IPS six hours to drive the 38 km between Ibagué and this mountain pass.

The need to control traffic on this narrow, busy road and the extreme poverty in the area have given rise to a strange occupation: human stoplights – men and women dressed in rags who use flags, flashlights and whistles to warn drivers that a semi-trailer truck is coming in the other direction, just around the next curve.

It is impossible for these huge trucks to avoid invading the other lane when taking a curve on the La Línea road. Drivers thank the human stoplights by tossing them a few coins.

The tunnel will ease traffic by cutting the distance by 10 km and saving drivers an 840-metre climb, which will reduce the average time it takes to drive across the Alto de La Línea pass by 87 percent for truck drivers (to 80 minutes) and by 72 percent for cars (to 30 minutes).

The average speed should increase to 60 km an hour, and accidents should be reduced by 75 percent, according to the Colombian Infrastructure Chamber.

Nearly 80 percent of Colombia’s domestic cargo is transported by road, according to the transport ministry.

But the country’s road infrastructure “is lagging by at least 30 years,” Diana Espinosa, the president of SCI – the engineers association – told IPS.

She attributed that to a lack of adequate state policies and to “the dedication of funds to financing the war [the nearly half-century armed conflict against left-wing guerrillas], which is causing us a huge lag in infrastructure.”

The volume of imports is three times that of exports, according to the National Council on Economic and Social Policy, the national planning authority.

For that reason, the first main tunnel will serve traffic from Buenaventura to Bogotá.

“People prefer the known risk to unknown solutions,” expert on natural disasters Gustavo Wilches-Chaux told IPS to explain why, despite the tragedy in Armero, no one is considering relocating Cajamarca, population 10,000 – the town that is closest to the Machín volcano.

To the contrary, the South Africa-based firm AngloGold Ashanti is moving forward with the massive La Colosa open-pit mine between Cajamarca and La Línea.

Ocampo said that “By pursuing economic activities in that area, like the La Colosa mine, we are inviting tens of thousands more people to live in an area of hazardous volcanic activity.”

“A blockage of the highway lasting just a few months would be a catastrophe – the country’s foreign trade would practically collapse,” the environmentalist said.

“This is not about our comfort, so our drive from Armenia to Ibagué will be 25 minutes shorter. This is for the comfort of the multinational companies. And it will be us who will pay a steep toll for going through that tunnel.”