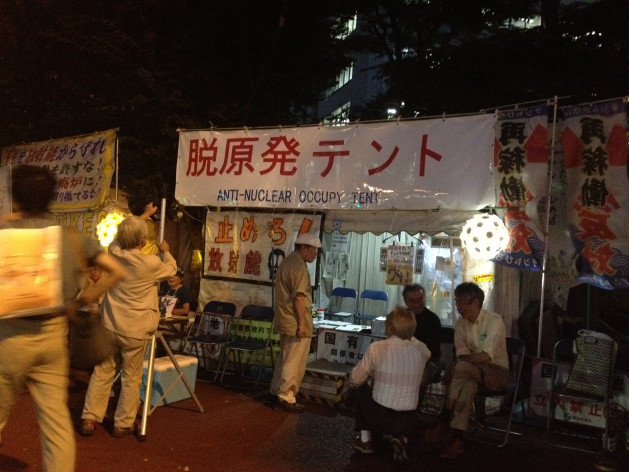 TOKYO, Oct 15 2013 (IPS) - Two and a half years ago, Ayako Oga, now 30, found herself helpless as an earthquake and the tsunami it triggered hit Japan and crippled four reactors at the Fukushima Daiichi nuclear plant. She and her husband were forced to abandon their village Ookuma Machi, barely five kilometres away.

The once-farmer is a leading activist today in Japan’s growing anti-nuclear movement, joining hundreds of Fukushima residents affected by the Mar. 11, 2011 tragedy to protest against a government plan to restart Japan’s nuclear reactors.

Japan’s Prime Minister Shinzo Abe, who has been aggressively pushing an economic agenda that has come to be called Abenomics, declared at a press conference last month, “We will restart nuclear power plants on the basis of the world’s strictest safety standards.”

“Representing important evidence of the dark side of nuclear power is something I have to do.”

With her worst fears come true, and now living with hundreds of evacuees in Aizu Wakamatsu, a town 100 km from the damaged plant, Oga is determined not to let this happen. “Representing important evidence of the dark side of nuclear power is something I have to do,” she told IPS.

Anti-nuclear sentiment in Japan peaked in the wake of the Fukushima incident. An opinion survey conducted by leading daily Tokyo Shimbun in July 2012 showed nearly 80 percent of the 3,000 respondents were opposed to nuclear power. Not surprising, given that the disaster forced 85,000 people to leave their homes, contaminated vast swathes of land and hit incomes of farmers and fisherfolk.

However, Oga and other anti-nuclear activists could well find themselves on the losing side now as the Liberal Democratic Party government and large corporations push for restarting the reactors, citing an energy crisis and economic losses.

Currently, Japan’s 50 nuclear reactors, which met 30 percent of the country’s energy needs, are shut down for various reasons, including routine inspection. The world’s third largest economy (GDP: 5.96 trillion dollars) imports almost 90 percent of its energy, leaving it with a trade deficit of 1.02 trillion yen (10.5 billion dollars).

With winning local approval as one of the conditions to restart the reactors, the government is publicising the stringent safety standards on the basis of which it will resume nuclear energy production.

The country had established an independent Nuclear Regulation Authority (NRA) in September 2012 comprising top scientists and safety experts. Its head Shunichi Tanaka, a scientist and native of Fukushima city, had officially stated that the official response and that of the Tokyo Electric Power Company (TEPCO), which operated the Fukushima plant, was “groping in the dark.”

The NRA’s new safety guidelines, which came into force in July this year, are based on the concept of defence-in-depth. This requires a strengthening of the third and fourth layer of defence as well as the prevention of simultaneous loss of all safety functions due to earthquakes, tsunamis and other external events.

People do seem to be buying into the government promise of safe nuclear reactors. Another survey by Japanese daily Asahi Shimbun in July this year registered a dip in support for abolishing nuclear power – 40 percent of its 1,000 respondents supported the restart of nuclear reactors with higher safety guidelines compared to 37 percent in February.

Mitsuhiko Tanaka, a scientist who has worked on reactor design for decades, likens the struggle of the anti-nuclear activists to a fight between David and Goliath.

“Activists are up against a powerful government and rich corporations who aim to justify nuclear power,” he told IPS. “They have the necessary clout to sway public opinion in Japan, where economic profit is what matters.”

He thinks the official moves to push safety standards and win public approval are gravely flawed.

“Besides the lack of transparency in the procedure of restarting the plants, a key point is that officials have still not scientifically revealed the real cause for the Fukushima accident,” he said.

Many scientists are critical of the official explanation that the 13-15 metres high tsunami alone damaged the reactors. With the reactors still in a crippled state, hard-core scientific evidence is yet to come, some say.

Professor Hiromitsu Ino, a nuclear safety expert and now head of the newly established Citizens’ Commission on Nuclear Energy, is one such critic. “I am not satisfied with the current official safety regulations because they do not include public interest and ethical aspects of nuclear power,” he told IPS. “This can be developed only after close discussions with people, and needs time.”

Ino also thinks that the new guidelines are not strict enough. For instance, he says, they permit energy operators an indefinite grace period to instal filters in boiling water reactors, viewed as critical to lessen the toxic impact of a hydrogen explosion.

The Fukushima nuclear disaster is believed to be the worst after Chernobyl in Ukraine in 1986. It remains an ongoing crisis, with the government battling to contain leaks of highly toxic ground water spilling into the sea and surrounding areas.

On Oct. 10, high levels of radioactive caesium were detected in the seawaters close to the defunct reactors, according to TEPCO.

In August, the Fukushima prefectural government released new statistics on thyroid testing on almost 200,000 children. The figures, reported in Asahi Shimbun, showed 44 children and youth diagnosed with or suspected to have the disease. They were aged between six and 18 years when the accident occurred.

Oga says her husband visited their former home in August as part of a visit arranged by the government for displaced nuclear refugees to sort out their documents and belongings.

“I did not join him even though I was keen to see my old home,” she told IPS. “I wanted to avoid radiation because I want to have a child in the future. Young people like us realise that we have only ourselves to rely on and change the world.”