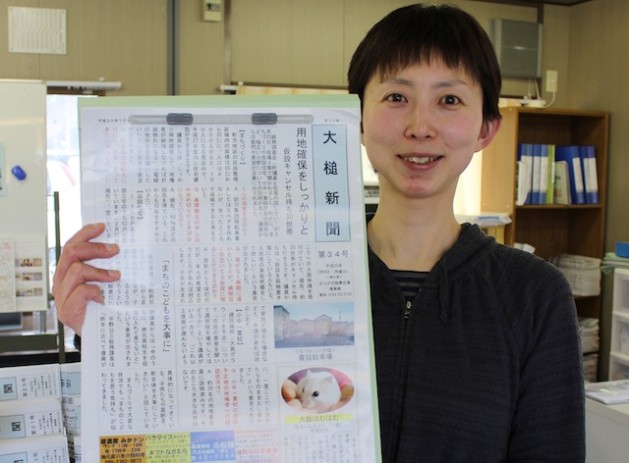 TOKYO, Mar 10 2013 (IPS) - Japan prepares to mark the second anniversary of the Mar. 11 triple disaster – an earthquake, tsunami and a critical nuclear reactor accident – with much soul searching across the country.

For Yukiko Takada from Otsuki-cho, a scenic fishing town in Iwate prefecture that was turned into rubble in a few hours on that fateful day, the upcoming memorial Monday will simply be another day.

“For me, as it is like for the survivors who experienced the horrible tragedy, everyday remains a memorial, not just March 11, as we struggle to accept what happened and to get our lives back after the devastation,” she tells IPS.

The young woman represents one of the more poignant stories in lessons learnt following the disaster. Takada launched her own community newspaper last June. It was a project, she says, that was imperative to the recovery of the local community.

Otsuchi Shimbun, published weekly, provides up to date information on issues such as relocation of families, temporary housing, employment opportunities and local government decisions. It plays a crucial role in the rebuilding of people’s confidence.

Supported mainly with revenue from local ads, the newspaper, a one-woman show, carries diverse voices, and includes a focus on women. Takada says women have displayed mind-boggling will power to restart their lives for the sake of their families.

Takada is planning a daily version of the paper later this year.

“The lack of correct information for disaster-struck people left them vulnerable and scared, and this problem needed to be addressed desperately as people sought to rebuild their lives,” she says. “Mainstream media outlets could not fulfill this role because they were busy filing stories aimed at readers outside our area.”

Reiko Masai, head of Kobe Net, a pioneering women’s organisation tackling disaster and gender issues that was established after the devastating Hanshin earthquake that hit Kobe city in western Japan in 1995, says that “two years after the disaster, despite national funds being poured into recovery, confusion and despair remain huge problems in the daily lives of the people. Takada has proved that women can be key to overcoming this struggle.”

Disasters are common in earthquake-prone Japan. It also leads with state-of-the art disaster prevention. But the 9.0 magnitude earthquake two years back that led to a 10-metre high tsunami has left the country still facing enormous challenges.

Currently about 160,000 people are still living in temporary housing with no hope of returning especially to areas hit by radiation contamination from the damaged Fukushima nuclear reactor.

Takada recalls how she barely escaped the tsunami. “I was in the neighbouring city when the quake hit. I quickly jumped into my car to return home. As I was driving, the road began to disappear in front me – it filled up with seawater from the tsunami. I abandoned the car and ran up a hill to save my life.”

Otsuki-cho, a bustling town of 16,000 people well known for its supply of fresh oysters, abalone and seaweed to the city markets remains a barren town today. It faces a population crunch as people either move out or into temporary housing.

Women face higher risks. Statistics after the Kobe earthquake indicate that the number of deaths of females between 70 and 90 years of age was more than double that of men in the same age group, mainly because women live longer and alone.

Stress and trauma also affect women more, given their childcare responsibilities. The Fukushima Women’s Network has noted high levels of anxiety among mothers of relocated families.

Gender has become an important concern in mainstream policy making now thanks to women’s groups that have lobbied hard the past two years.

The gender equality bureau in the Cabinet Office released new gender-based guidelines in disaster planning last year. These include provisions for women-friendly shelters, protecting women from sexual harassment, and employment information for women.

“There is no doubt that women’s concerns are slowly entering mainstream policy,” says Masai. “But there is still much work to be done, especially when it comes to getting women into leadership roles in disaster prevention and post-disaster planning. That is our next step.”