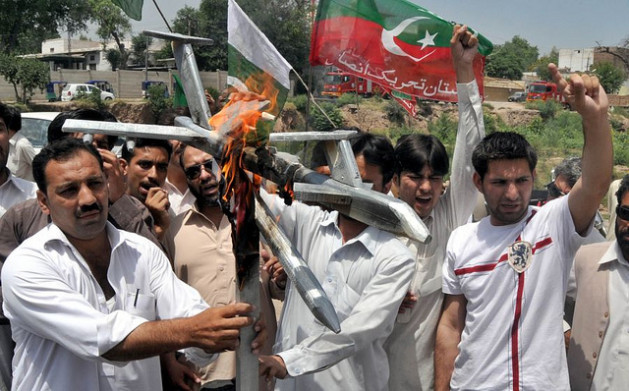 WASHINGTON, Oct 25 2013 (IPS) - The Washington Post on Thursday reported what it presented as new evidence of a secret agreement under which Pakistani officials have long been privately supporting the U.S. drone war in the country even as they publicly criticised it.

Most news outlets picked up the Post story, and the theme of public Pakistani opposition and private complicity on the drone issue framed media coverage of Pakistani Prime Minister Nawaz Sharif’s declaration that he had called on President Barak Obama to end the drone war.

The CIA’s drone war was no longer concentrated from mid-2008 onward on foreign terrorists...Instead the CIA was targeting Islamists who had made peace with the Pakistani government.

But the Post story ignored a central fact that contradicts that theme: the Pakistani military leadership had turned decisively against the drone war for years and has been strongly pressing in meetings with U.S. officials that Pakistan be given a veto over targeting.

In fact, the leak of classified CIA documents to the Post appears to represent an effort by CIA officials to head off a decision by the Obama administration to reduce the drone war in Pakistan to a minimum, if not phase it out completely.

The Post article, co-authored by Bob Woodward, said, “Despite repeated denunciation of the CIA’s drone campaign, top officials in Pakistan’s government have for years secretly endorsed the program and routinely received classified briefings on strikes and casualty counts….”

The Post cited top secret CIA documents that it said “expose the explicit nature of a secret arrangement struck between the two countries at a time when neither was willing to publicly acknowledge the existence of the drone program.” The documents, described as “talking points” for CIA briefings, provided details on drone strikes in Pakistan from late 2007 to late 2011, presenting them as an overwhelming success and invariably claiming no civilian casualties.

It has long been known that an understanding was reached between the George W. Bush administration and the regime of President Pervez Musharraf under which the CIA was allowed to carry out drone strikes in Pakistan.

A WikiLeaks cable had quoted Prime Minister Yousaf Gilani as saying in August 2008, “I don’t care if they do it as long as they get the right people. We’ll protest in the National Assembly and then ignore it.”

That statement was made, however, at a time when CIA strikes were still few and focused only on Al-Qaeda leadership cadres. That changed dramatically beginning in 2008.

The Post articles failed to point out that that Pakistan’s military leadership shifted from approval of the U.S. drone campaign to strong opposition after 2008. The reason for the shift was that the CIA dramatically expanded the target list in 2008 from high value Al-Qaeda officials to “signature strikes” that would hit even suspected rank and file associated with supporters of the Pakistani and Afghan Taliban.

The Post referred to the expansion of the drone strike target list, but instead of noting the impact on the Pakistani military’s attitude, the article brought in another popular news media theme – the unhappiness of Obama administration officials with the support of the Pakistan’s intelligence agency for the Afghan Taliban based in Pakistan.

The Obama administration was well aware of the Pakistani military’s support for the Afghan Taliban movement, however, before it decided to escalate the war in Afghanistan – a fact omitted from the Post story.

The vast expansion of drone strikes in Pakistan engineered by then CIA Director Michael Hayden in 2008 and continued by his successor, Leon Panetta, was justified by targeting anyone in Pakistan believed to be involved in support for the rapidly growing Pashtun resistance to the U.S.-NATO military presence in Afghanistan.

Two-thirds of the drone strikes in 2008 targeted leaders and even rank and file followers associated with Jalaluddin Haqqani and Mullah Nazeer, both of whom were involved in supporting Taliban forces in Afghanistan, but who opposed attacks on the Pakistani government.

At least initially, the CIA was not interested in targeting the Pakistani Taliban leaders associated with Baitullah Mehsud, who was leading the violent war against the Pakistani military. It was only under pressure from the new head of the Pakistani Army, Chief of Staff Gen. Ashfaq Parvez Kayani, that the CIA began targeting Mehsud and his organisation in 2009, when Mehsud was killed in a drone strike.

That temporarily mollified the Pakistani military. But in 2010, more than half the strikes in Pakistan were against Hafiz Gul Bahadur, an ally of the Haqqani forces who had reached agreement with the Pakistan government that he would not shelter or support any Taliban militants fighting against the government.

Nearly all the rest of the strikes were against Afghan Taliban targets.

The original agreement reached under Musharraf was clearly no longer applicable. Kayani had clearly expressed his unhappiness with the drone war to the CIA leadership in 2008-09 and again in 2010, but only privately.

Then the January 2011 Raymond Davis incident, in which a contract CIA employee shot and killed two Pakistanis who he believed had been following him on motorcycles, triggered a more serious conflict between the CIA and ISI.

The CIA put intense pressure on ISI to release Davis from jail rather than allowing him to be tried by a Pakistani court, and ISI Chief Shuja Pasha personally intervened in the case to arrange for Davis to be freed on Mar. 16, 2011, despite the popular fury against Davis and the United States.

But the CIA response was to carry out a drone attack the day after his release on what it thought was a gathering of Haqqani network officials but was actually a meeting of dozens of tribal and sub-tribal elders from all over North Waziristan.

An angry Kayani then issued the first ever denunciation of the U.S. drone campaign by a Pakistan military leader. And when Pasha met with CIA Director Leon Panetta and Deputy Director Michael Morell in mid-April 2011, he demanded that Pakistan be given veto power over the strikes, according to two active-duty Pakistani generals interviewed in Islamabad in August 2011.

Reuters reported Apr. 16, 2011 that U.S. officials had said the CIA was willing to consult with Pakistan over the strikes, but that suggestions from the Pakistani military that the drone campaign should return to the original list of high value Al-Qaeda targets was “unacceptable”.

But the Pakistani military’s insistence on cutting down on strikes apparently had an impact on the Obama administration, which was already debating whether the drone war in Pakistan had become counterproductive. The State Department was arguing that it was generating such anti-U.S. sentiment in Pakistan that it should be curbed sharply or stopped.

Obama himself indicated in his May 23, 2013 speech at the National Defence University that he was thinking about at least reducing the drone war dramatically. Obama said the coming end of U.S. combat in Afghanistan and the elimination of “core Al-Qaeda militants” in Pakistan “will reduce the need for unmanned strikes.”

And in an Aug. 1 interview with a Pakistani television interviewer, Secretary of State John Kerry said, “I think the [drone] programme will end…. I think the president has a very real timeline, and we hope it’s going to be very, very soon.”

CIA concern that Obama was seriously considering ending the drone war in Pakistan was certainly the motive behind a clever move by CIA officials to create a story denigrating Pakistani official opposition to the drone war and presenting it in the best possible light.