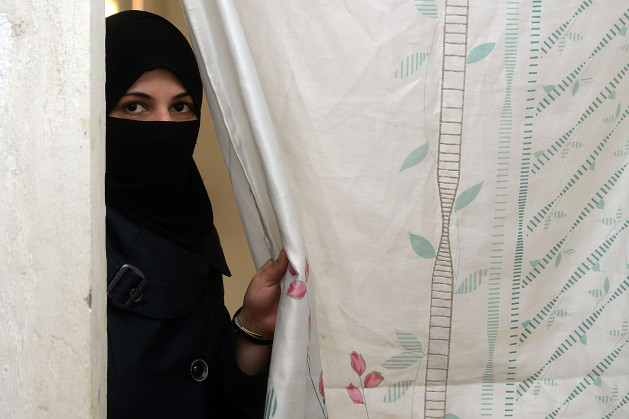 CAIRO, Oct 28 2013 (IPS) - Mahmoud Abu Yousef, 28, sits in one of the suburban subway stations of Egyptian capital Cairo selling socks. He had fled Syria with his wife and one-year-old child this February after his parents and three brothers were killed in the civil war that has been raging in his country since March 2011.

Yousef now lives in 6th of October city, a refugee centre 32 km south of Cairo. “I spend the day at the subway,” he tells IPS, “and work as a security guard in the night to meet our expenses.”

The 150,000 Syrian pounds (1,000 dollars) he had on him when leaving Syria went to the smugglers promising safe destinations. But the money could not buy the freedom Yousef had hoped for.

On Jun. 15, a fortnight before he was deposed, Egyptian president Mohamed Morsi had cut off all diplomatic ties with Syria.

“The situation of Syrian refugees in Egypt has reached a critical stage since the revolution of June 30."

Three weeks later, the new military government that took over imposed new, stricter rules for Syrian refugees trying to cross the border. They now needed a visa, as well as national security approval to be in Egypt.

“After the diplomatic cut-off, getting such a visa is impossible,” says Yousef.  “Given these complicated procedures, we understand that Syrians are not welcome in Egypt anymore.”

Authorities estimate the number of Syrian refugees in Egypt to be approximately 300,000. More than 115,000 people have died in the war between the forces of Syrian president Bashar al- Assad and the rebels, according to fgures provided by the UK-based Syrian Observatory for Human Rights. Desperate Syrians have tried to flee the hell that their country has become, only to find that the outside world is often no kinder to their plight.

“I wish I had been killed in Syria rather than lead this humiliating life in Egypt,” says Amer Feras, who came to Cairo after he lost his wife and youngest daughter in the jet attack that Assad’s forces launched this January on Homs city, 161 km north of Damascus.

Feras now lives in a tiny room in a refugee building in Shebin el Koum city in Monufia Governorate, an hour’s drive north of Cairo. The building’s Egyptian owner, Tarek Marzouk, runs a drycleaning business and has offered a free room for each helpless family coming in from Syria.

It took Feras 25 days to escape from Syria with his three daughters. “I had to cross some cities on foot to reach the Turkish border,” he tells IPS. However, his nightmare hasn’t ended. “My girls can’t join government schools and I don’t have the money to put them in private schools,” he says. “We lost our properties, home, dignity and our right to live as human beings or at least as war refugees.”

The same despair echoes in the voice of Dana Gad, an 18-year-old medical student from Syria, who can now be found most days outside Cairo’s mosques asking for help. “In addition to the cancellation of some flights coming in from Syria after the new restrictions, most of our requests for accommodation are rejected, so most of us are living here illegally,” she tells IPS.

Gad came to Egypt with her mother after losing her father and brother. “My father was a jeweller who ran a store in the heart of Damascus. He died inside the store during the shelling by Assad’s forces,” she says.

“Now I’m begging in front of mosques in Egypt to support my family. I have to carry my passport to prove my identity, and sometimes I earn sympathy and assistance from the Egyptians,” she adds.

Gad also thinks they were better off under Morsi. “Under the Muslim Brotherhood, we got better treatment, free education and healthcare,” she says. “Even when Morsi decided to cut off relations with the Assad regime, we were getting proper and supportive governmental treatment.”

She blames the local Egyptian media for fostering anti-Syrian sentiment. According to her, they launched an organised campaign against Syrians, alleging that they were terrorists and had come to support the deposed Morsi and the Muslim Brotherhood for money.

“Because of that,” she says, “families and individuals started to think of illegal immigration to Europe, even if it meant drowning to death.”

On Oct. 12, at least 12 Syrian and Palestinian refugees drowned as their boat sank off the Egyptian port city of Alexandria. Only a week earlier, 359 migrants had drowned after their boat capsized 120 km off the Italian island of Lampedusa.

“The situation of Syrian refugees in Egypt has reached a critical stage since the revolution of June 30,” says Abdel Karim Rehawi, head of the Syrian League for the Defence of Human Rights, referring to the Egyptian protests that led to the overthrow of Morsi.

Rehawi too says the military regime has tightened screws on Syrians after individuals were accused of being in collusion with Islamist groups and working against the state.

Because of the lack of aid and support, and struggling to find work and shelter, many of these refugees have taken to begging in public places, a humiliating fate for any people, he adds. “There is some aid from a few Egyptian families and volunteers, but no official support from the Egyptian state,” he says.

The harassment by the Egyptian security officials if they are unable to complete all the required paperwork has forced nearly 150,000 Syrian refugees in Egypt to migrate to Turkey, Lebanon and Jordan. “In addition, there are 60 Syrian detainees currently in Alexandria, arrested while trying to escape to Italy,” says Rehawi.

“Smugglers take advantage of their plight and charge up to 3,000 dollars to take them illegally in rickety boats to the Italian coast,” he adds.