Taliban Waiting to Take Over from the U.S. 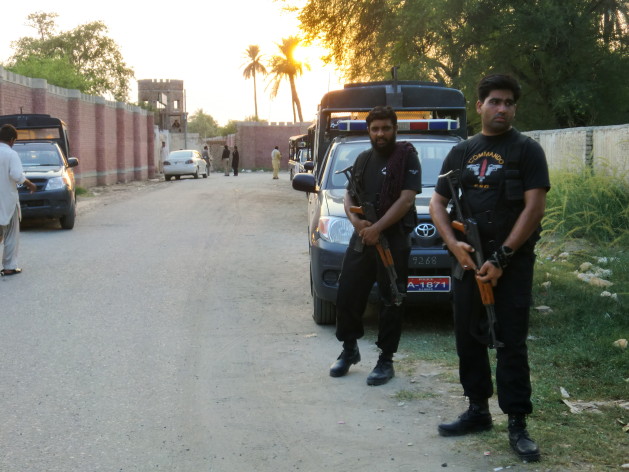 The police guard a jail in Peshawar after the Taliban engineered a mass outbreak of their imprisoned comrades. Credit: Ashfaq Yusufzai/IPS.

PESHAWAR, Oct 27 2013 (IPS) - As international troops get ready to leave Afghanistan by the end of 2014 and NATO-ISAF (International Assistance Security Force) prepare the Afghan National Security Forces to take over from them, there is fear and misgiving in neighbouring Pakistan, particularly in the adjoining regions of the Federally Administered Tribal Areas (FATA) and the northwestern province of Khyber Pakhtunkhwa.

People here fear that the withdrawal of foreign troops from Afghanistan will only strengthen militant forces in their midst, especially the Tehreek-e-Taliban Pakistan (TTP). Headquartered in FATA’s South Waziristan agency, the TTP’s avowed aim is to establish the Islamic law of Sharia in the country.

Ever since it emerged in 2007, the now banned outfit has unleashed a reign of terror with bomb and suicide attacks against the Pakistani state, intelligence agencies and civilian targets.

“There should be a complete end to the war against one’s own people. And we should get out of the U.S.-led war against the Taliban.”

A small flicker of hope arose when the Nawaz Sharif-led Pakistan Muslim League (PML-N) came into power in May this year and expressed a strong willingness to make peace with the militants. An All Parties Conference on Sep. 9 gave the federal government the mandate to initiate such talks. As a further marker of its peaceful intent, the government has been releasing some prisoners.

At the provincial level, cricketer-turned-politician Imran Khan, always vocal about talks with Taliban, has only raised his pitch after his Pakistan Tehreek-e-Insaaf party formed the government in Khyber Pakhtunkhwa this May.

“There should be a complete end to the war against one’s own people,” Khan told IPS in an interview. “And we should get out of the U.S.-led war against the Taliban.”

Pakistan has been a frontline state in the U.S. War Against Terror after the Sep.11, 2001 attacks on its soil. The campaign began that year with the unseating of the Taliban regime in Afghan capital Kabul, forcing many of the Taliban and Al Qaeda cadre to slip along the 2,400 km-long porous border into the mountainous western region of Pakistan.

Some 50,000 people are said to have been killed in terror attacks and military operations since 2001, according to a report Pakistan spy agencies submitted before the country’s Supreme Court in March this year.

Blaming the extensive military operations in FATA for the current situation, Khan said it has only ended up creating more terrorists.

According to military sources, Pakistan has deployed 100,000 troops in FATA and conducted over 100 operations since 2001.

“We have sent the army to all seven districts of FATA, but the violence has increased and the Taliban are still active,” Khan said. “Their orders are implemented at once while the government’s writ is not visible.”

Not everyone is as charitable towards the TTP. “They have dishonoured four peace agreements in the past,” said Suhail Shah, a student of international relations at the University of Peshawar.

They are making no exceptions this time either, Shah told IPS, “because they are talking peace on the one hand and incidents of violence are escalating on the other.”

A twin suicide bomb attack at the All Saints’ Church in Khyber Pakhtunkhwa capital Peshawar on Sep. 22, followed by a bomb attack on a passenger bus on Charsadda Road in the city five days later and a car bomb explosion at its Qissa Khwani marketplace on Sep. 29 bely any notion that the militants want to make peace.

On Oct. 16, provincial law minister Israullah Gandapur was assassinated in a suicide bomb attack outside his house in the Kullachi village of Dera Ismail Khan district of Khyber Pakhtunkhwa.

These incidents only show that the TTP wants to tackle the government from a position of authority, Shah said.

TTP spokesperson Shahidullah Shahid told the media that the government was not serious about talks. “We will hold talks with the government in line with our agenda of Islamic Sharia. If the government doesn’t show willingness, then we would continue our struggle to enforce it,” he said.

“The Taliban are just dragging their feet on the peace dialogue,” Sagheer Ahmed, a senior professor at the Abdul Wali Khan University in Mardan, a central city in Khyber Pakhtunkhwa, told IPS. They are just biding their time till foreign troops leave Afghanistan, he added. “They believe their comrades there will assume power from the beleaguered rulers.”

Indeed, Shahid in his interaction with the media, had said, “All pro-American leaders will flee Afghanistan after the withdrawal of U.S. and NATO forces.” He also said the Afghan Taliban still rule half of the country. “The Afghan president cannot leave the presidential palace due to the fear of the Taliban,” he added.

Major Khalid Khan, who remained part of the military operations in FATA till his retirement in May there, is also in no doubt that TTP will be unassailable once Afghanistan is left to fend for itself. “They will probably carry out public executions, like they did in Afghanistan and Swat,” he told IPS.

They have no dearth of arms and ammunition, he said. “At least a dozen arms-manufacturing factories in FATA used to supply weapons to the Taliban,” Khalid said. The areas where these are located – in North Waziristan and Khyber Agency – are also under TTP influence.

Just 10 days before the spate of incidents in Peshawar, the police had on Sep. 11 recovered a huge cache of weapons being transported from FATA to Peshawar, according to news reports.

“The people want neither the army nor the Taliban in FATA, they want peace,” Maj. Khan said. Violence and persistent curfews have confused them, he added.

“There is no social activity or games. Before the militancy, musical concerts used to be held before marriages traditionally,” Muhammad Shah, a resident of North Waziristan and a lecturer at the Government College in Khyber Pakhtunkhwa’s Bannu district, told IPS.

Businesses too have suffered. “We have been consistently hit by militancy and our business has dwindled over the years,” Shah Nawaz Khan, who owns a general store in South Waziristan, told IPS. “A large number of people have migrated to safer areas because of which our customers have decreased,” he added.