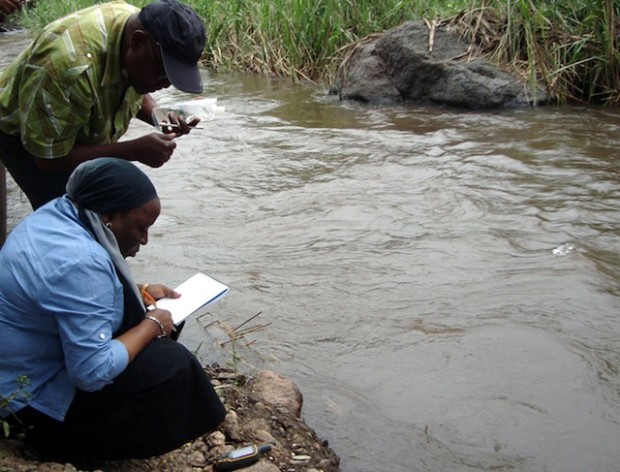 PANGANI, Tanzania, Oct 22 2013 (IPS) - The freshwater drinking supply of the coastal town of Pangani in northeast Tanzania is becoming increasingly contaminated as salt water steadily seeps in from the Indian Ocean.

The 500 km Pangani River and underground aquifers are the main sources of drinking water for thousands of residents in Pangani town, located about 400km north of the capital, Dar es Salaam. Over the last few decades, the rising ocean has been siphoning away freshwater and leaking salt water into aquifers and wells.

Dwindling rainfall has also made it difficult to replenish freshwater supplies. But Pangani town residents tell IPS that some underground wells that were previously resilient to the seeping salt water have now been contaminated.

“The rate at which dissolved salt is leaking into freshwater sources is quite alarming, we have to be extra-vigilant to monitor this situation,” Hamza Sadiki, a researcher with Pangani Basin Water Board tells IPS. He says most water sources have been contaminated, leaving people with no other option but to drink salty water.

“It’s a pity that most people drink salty water whose salinity exceeds acceptable standards, but we simply can’t tell them don’t drink it.” -- Mohamed Hamis, a water engineer with the Pangani Town district authority

Scientists have linked the growing problem partially to climate change. According to the United States Environmental Protection Agency, as sea levels rise, water from the ocean will inundate wetlands and other low-lying lands, intensify flooding and increasing the salinity of rivers and groundwater tables.

According to a 2011 study titled “Economics of climate change in Tanzania”, published by the Tanzania government in collaboration with the United Kingdom’s Department for International Development, changing weather patterns in this East African nation will make its coastal communities more vulnerable to rising sea levels.

Already, many along the coast have been forced to drink water with high levels of soluble salt and many are bracing for a bleak future as they desperately wait for the government to improve the quality of their water.

“Salt water is a huge problem here, but we drink it anyway since fresh water has become scarce. All the wells are supplying salt water – we need help,” Amran Shamte, a 65-year-old local resident tells IPS. He recalls his school days in the 1960s when crocodiles were commonly seen close to the river mouth. He says that today they have moved further upstream as they cannot withstand the salt water seeping into their freshwater supply.

According to the World Health Organisation, the acceptable level of dissolved salts in freshwater from lakes, rivers and ground water is from 20 to 800 milligrams per litre (mg/L).

But water samples taken by researchers from the Pangani Basin Water Board show that the total soluble salt levels downstream of the Pangani River are far beyond acceptable standards at 2,000 mg/L.

“It is for this reason that the government decided to set its own standards of salt water to enable people in coastal communities to drink this water,” Arafa Maggid, an engineer from Pangani Basin Water Board tells IPS.

Sabas Kimboka, a nutritionist from the Tanzania Food and Nutrition Centre, tells IPS that drinking salt water over a long period of time could potentially be hazardous to human health since salt dehydrates the body.

“There is no safe amount of seawater to drink, the salt makes you more dehydrated and requires you to drink more fresh water [that] you probably don’t have,” he explains.

Mohamed Hamis, a water engineer with the Pangani Town district authority, tells IPS that salt water intrusion has gone 10 km upstream of the river, making it difficult for the authority to supply fresh water, especially during high tide. The town authority now pumps water only during low tide and plans to move the pump further upstream, he says.

“Some of these villages are very close to the ocean, and the water table is already deeply percolated with dissolving salts,” Hamis says. They have not yet conducted a census to establish how many people are affected.

He adds that the government is considering hiring experts to drill salt water barrier wells to protect underground aquifers from contamination, but this project will depend on the availability of funds.

According to Hamis, in some villages two out of three large underground wells are highly contaminated by saline intrusion. As a result some residents have been forced to travel longer distances to find fresh water.

To help stem this growing problem, the government is encouraging local communities who live close to the Indian Ocean to move further inland where water sources are less contaminated. But many say they cannot afford to move anywhere since they do not have the means to do so.

“It’s a pity that most people drink salty water whose salinity exceeds acceptable standards, but we simply can’t tell them don’t drink it,” Hamis says, showing his concern for the government’s decision to raise the acceptable standards of water salinity beyond international norms.