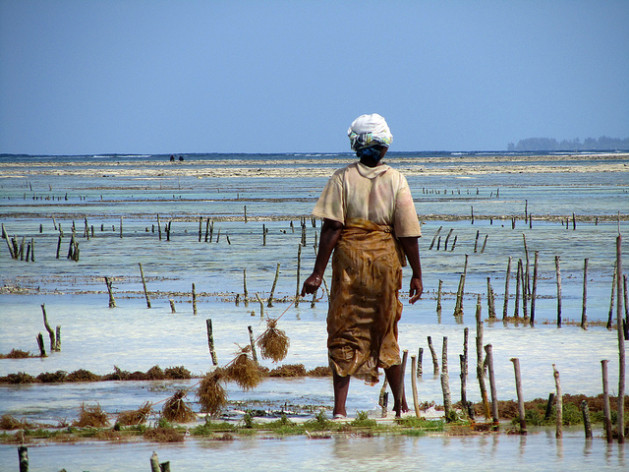 Over the years Zanzibar’s sea levels have risen to erode beaches and contaminate some of the island’s fresh water supply. Credit: Giandomenico Pozzi/CC by 2.0

And until recently, the 36-year-old mother of 12 from Nungwi village in Unguja on the northernmost part of Zanzibar, spent most of her day walking to her nearest fresh water supply to collect safe drinking water.

“The water is very salty so it can’t be used for anything. You will use a lot of soap and water if you use it for washing clothes or dishes. Another difficulty is that you can’t use it for cooking or drinking. That is why we had to walk for long distances to collect water from fresh water wells,” Komboani tells IPS.

According to Zanzibar’s Department of Environment, rising sea levels have resulted in seawater mixing with fresh water supplies and contaminating the wells here. Zanzibar does not have rivers and the main source of water remains groundwater, which depends on the currently erratic rainfall.

"The villages used to be far from the shore, but now everyone lives close to the ocean." -- Masoud Haji

But thankfully, for Komboani, the experience of spending hours collecting water is now just a memory, since the implementation of a project to supply clean and safe water to households in her village.

In October 2012, the Africa Adaptation Programme (AAP) of the United Nations Development Programme (UNDP) constructed an eight-km pipeline from Kilimani village, in the interior, to Nungwi village, which lies along the coast. A huge water tank near Kilimani village sustains the water supply.

The AAP, a climate change programme implemented in 21 African countries, aims to assist Tanzania with the development of climate-smart policies and climate change adaptation projects.

Meanwhile, the 15,000 people from Nungwi village now have access to water 24 hours a day, which can be sourced from taps and reservoir tanks.

Komboani says that since the water project was introduced, she now has more time to concentrate on her business of selling snacks. She says she earns approximately five dollars a day from this.

“I don’t have to worry about waking up early to collect water anymore. I use the time to engage in other productive activities, such as selling snacks and working in my vegetable garden.

“My husband used to accuse me of being unfaithful when I would return home late from the well. I am now glad that we have peace in our home,” she says.

Not only has it brought peace to Komboani’s home, but the easy access to drinking water has saved many women and girls from unwanted marriages.

Zanzibar’s North A district commissioner, the equivalent of a governor, Tatu Mganga, says her office had to intervene several times when they heard about women being married off so they could be used to fetch water for their new husbands.

“Such incidents were common and we had to intervene and rescue girls when we heard these stories,” Mganga tells IPS.

She says that while everyone in Nungwi village was affected by the shortage, women and children suffered the most because they were responsible for fetching water for their families.

Mganga says that the lives of the people from Nungwi village and its surrounding areas have now changed for the better.

“Almost all the people living in the area now have access to clean and safe water. Families can now wash their hands and clothes, and bathe properly. Subsequently, there has been improved sanitation,” says Mganga.

UNDP country director for Tanzania, Philippe Poinsot, tells IPS that the AAP is focused on improving the supply of clean and safe water to households through pilot projects.

“Women and children were walking for too long to fetch water from dirty surface water points (and consumption of this water) had accelerated ill health,” Philippe says. The rampant use of unclean water in Nungwi village led to an increase in pneumonia and skin diseases. Local health authorities say there has since been a decrease in these cases.

Ally Jabir Haiza, Zanzibar’s district health officer, tells IPS that the water from shallow wells along the island’s coast was tested and found to be excessively salty. This, he explains, impacted on healthcare in the area. In Unguja, a newly built maternity ward could not be used because of the shortage of clean water.

“Students too could not concentrate on their studies because they were frequently worried about fetching water when they returned home. And they were already tired when they commenced their lessons in the morning (from going to fetch water before school).

“Sometimes new mothers from Nungwi, who were experiencing postpartum stress, were forced to walk down the three-km road to fetch water from the nearest fresh water well,” says Hiza.

But now that fresh water is being piped in, the residents of Nungwi village have access to more water – some 20 litres per day compared to the five litres a day they collected from their nearest fresh water wells.

According to Sheha Mjanja, director of environment in Zanzibar’s Vice President’s Office, several surveys conducted over the past 10 years have confirmed that the island is vulnerable to the impact of climate change, particularly rising sea levels and beach erosion.

“The impact of climate change in Nungwi village is one of the biggest challenges at the moment. The water is quickly eating into the land and we fear the situation could worsen,” Mjanja tells IPS.

Mjanja adds that rising sea levels could cause a serious water shortage on the island as salt water is increasingly seeping into the ground water supply.

He says that the government is currently preparing a strategy paper to address the impact of climate change here and hopes to involve the private sector in implementing solutions.

Meanwhile, the elders here are witness to the impact climate change has had on this island. One community elder, 58-year-old Masoud Haji, tells IPS that over the years sea levels have risen about 80 metres.