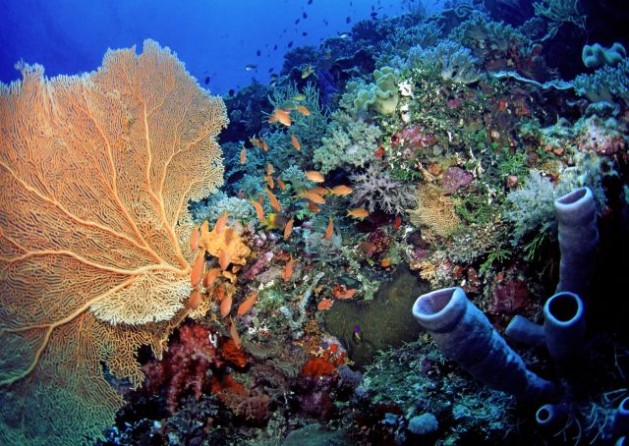 Rich benthic fauna and associated reef fish, Southeast Sulawesi, Indonesia, which is expected to be one of the first places in the world to see prolonged, record-breaking heatwaves. Credit: Courtesy of Keoki Stender, Marinelifephotography.com

UXBRIDGE, Canada, Oct 10 2013 (IPS) - A climate plague affecting every living thing will likely start in 2020 in southern Indonesia, scientists warned Wednesday in the journal Nature. A few years later the plague will have spread throughout the world’s tropical regions.

By mid-century no place on the planet will be unaffected, said the authors of the landmark study.

"Within my generation, whatever climate we were used to will be a thing of the past." -- Nature study lead author Camilo Mora

“We don’t know what the impacts will be. If someone is about to fall off a three-storey building you can’t predict their exact injuries but you know there will be injuries,” said Camilo Mora, an ecologist at University of Hawai‘i in Honolulu and lead author.

“The results shocked us. Regardless of the scenario, changes will be coming soon,” said Mora.

The “climate plague” is a shift to an entirely new climate where the lowest monthly temperatures will be hotter than those in the past 150 years. The shift is already underway due to massive emissions of heat-trapping carbon from burning oil, gas and coal.

Extreme weather will soon be beyond anything ever experienced, and old record high temperatures will be the new low temperatures, Mora told IPS. This will affect billions of people and there is no going back to way things were.

“Within my generation, whatever climate we were used to will be a thing of the past,” he said.

In less than 10 years, a country like Jamaica will look much like it always has but it will not be the same country. Jamaicans and every living thing on the island and in its coastal waters will be experiencing a new, hotter climate – hotter on average than the previous 150 years.

The story will be same around 2030 in southern Nigeria, much of West Africa, Mexico and Central America without major reductions in the use of fossil fuels, the study reports.

“Some species will adapt, some will move, some will die,” said co-author Ryan Longman also at the University of Hawai‘i.

Tropical regions will shift first because their historical temperature ranges are narrow. Climate change may only shift temperatures by 1.0 degree C but that will be too much for some plants, amphibians, animals and birds that have evolved in a very stable climate, Longman said.

Tropical corals are already in sharp decline due to a combination of warmer ocean temperatures and  higher levels of ocean acidity as oceans absorb most the carbon from burning oil, gas and coal.

The Nature study examined 150 years of historical temperature data, more than a million maps, and the combined projections of 39 climate models to create a global index of when and where a region shifts into novel climate. That is to say a local climate that is continuously outside the most extreme records the region has experienced in the past 150 years.

Canada’s climate won’t shift until 2050 under the business as usual emissions scenario the Intergovernmental Panel on Climate Change (IPCC) calls RCP8.5. The further a region is from the equator, the later the shift occurs. If the world sharply reduces its use of fossil fuels (RCP4.5), then these climate shifts are delayed 10 to 30 years depending on the location, the study shows. (City by city projection here)

Tropical regions are also those with greatest numbers of unique species. Costa Rica is home to nearly 800 species, while Canada, which is nearly 200 times larger in area, has only about 70 unique or endemic species.

Species matter because the abundance and variety of plants, animals, fish, insects and other living things are humanity’s life support system, providing our air, water, food and more.

“It’s an elegant study that shows timing of when climate shifts beyond anything in the recent past,” said Simon Donner, a climate scientist at Canada’s University of British Columbia.

Donner, who wasn’t involved in the study, agrees that the new regional climates in the tropics will have big impacts on many species.

“A number of other studies show corals, birds, and amphibians in the tropics are very sensitive to temperature changes,” Donner told IPS.

The impacts on ecosystems, food production, water availability or cites and towns are not known. However, the results of the study confirm the urgent need to reduce carbon emissions to reduce those future impacts, he said.

Developed countries not only need to make larger reductions in their emissions, they need to increase their “funding of social and conservation programmes in developing countries to minimize the impacts of climate change”, the study concludes.

Amongst the biggest impacts the coming ‘climate plague’ will have is on food production, said Mora.

“In a globalised world, what happens in tropics won’t stay in the tropics,” he said.